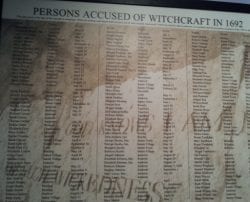 Visitors whose ancestors were involved in the Salem witch trials often ask us to point their  investigations in the right direction.  There are online ancestry resources, document transcripts and historic narratives that can provide clues and details of their families’ lives. Research uncovers so many captivating human stories.  In this case Peter helps a descendent of Sarah Basset:

Sarah Hood Bassett was born in August of 1657 in Lynn, Essex County, Massachusetts to Richard Hood and Mary Newhall.  In her eighteenth year, on October 25, 1675 she married William Bassett, Jr., who was the brother of Elizabeth Bassett Proctor, wife of John Proctor.  Both John and Elizabeth Proctor were accused and tried for witchcraft; John was hanged on August 19th, 1692, whereas Elizabeth escaped persecution due to her pregnancy.  Their daughter, Sarah Proctor, was also accused of witchcraft at age 16 on the same day as her aunt Sarah Bassett.  Thomas Putnam and John Putnam, Jr. issued this complaint on May 21, 1692, exactly one month after the examination of Mary Warren (John and Elizabeth Proctor’s hired girl) who claimed Elizabeth Proctor administered an ointment to her which she received from “Mrs. Bassits of Linn.” Only two days after the Putnam’s complaint against Sarah Basset she was brought to jail in Boston on May 23, 1692, where she remained until her release on December 3, 1692.  One month after her release another indictment was issued for afflicting Mary Walcott, but was returned “ignoramus,” meaning the charges were ignored due to lack of evidence. Not long after the ordeal was over, Sarah gave birth to a daughter whom she named Deliverance as an ode to her freedom.  Sarah Bassett died at age 64 in 1721. While no burial record exists, I have theorized that she may be buried in the Western Burial Ground in Lynn, Massachusetts.  This was the only operational burial ground in the town at the time of her death with the exception of a Lynnfield burial ground opened in 1720, but where the oldest inscription dates only back to 1723.  Further evidence that may lend itself to my hypothesis is the fact that Lynn’s Western Burial Ground contains 19th Century graves sporting Sarah’s married name – Bassett – and her mother’s maiden name – Newhall.