In 1692, Andover saw more people accused of witchcraft than any other town. The accusations escalated when Joseph Ballard brought two of the afflicted girls from Salem Village to determine the cause of his wife’s illness. Within several weeks, forty-five people were accused, many of whom confessed.

The witchcraft delusion in Andover began with the accusation and arrest of Martha Carrier in late May of 1692, but escalated in mid-July when Joseph Ballard invited two of the afflicted girls from Salem Village to visit his sick wife in Andover. Elizabeth (Phelps) Ballard had been inexplicably ill all summer. Was she bewitched? The girls (it is assumed they were Ann Putnam Jr. and Mary Walcott) confirmed Elizabeth Ballard was tormented by witchcraft and accused several Andover residents. Shortly thereafter Joseph Ballard entered a complaint against Mary Lacy Sr. and her daughter, Mary Lacy Jr.

Why did Joseph Ballard initially suspect witchcraft was behind his wife’s illness?  There are a few possibilities. The fear that pervaded Essex County in 1692 may have been one reason. Joseph’s brother John Ballard was the constable for Andover’s south end and it was he who arrested Martha Carrier and escorted her to Salem in May. Perhaps John witnessed the hysteria that gripped Salem and brought home stories.

A family connection may have also been involved. John Ballard’s wife, Rebecca Hooper, was the sister of Sarah Hooper, wife of Samuel Wardwell. (Another brother, William Ballard, was married to a third Hooper sister, Hannah.) The Wardwells lived about a mile and a half to the northeast. Wardwell expressed worry to his brother-in-law that he [Wardwell] might be suspected of witchcraft, perhaps because he was a known fortune-teller. This was apparently an idea that had not occurred to John Ballard – but did he share this information with his brother Joseph? A family member might be accused?  It was prescient of Samuel Wardwell to worry – he was accused of witchcraft and arrested on August 31, and hanged on September 22.

Identifying those who “tormented” Elizabeth Ballard did not help her. She died of her illness on July 27, 1692.

Charlotte Helen Abbott’s Notes and Records of the Ballard Family of Andover, available at Memorial Hall Library, list the parents of Joseph and John Ballard as William and Grace Ballard. They were known to have been in Andover by the 1660s.

The Notes and Records of the Ballard Family of Andover say that when Joseph’s father William died in 1691, Joseph’s inheritance included “20 acres of Upland, ‘where his house is;’ 50 acres of the Great Division; 14 acres by the Shawshin…” and many additional parcels of land. Charlotte Abbott also states that “His homestead was site of Public Library,” today on North Main and Essex Streets, although that is identified as Abbot property on the Plan of Andover in the Province of Massachusetts Bay, Essex County, 1692 which was created by the Andover and North Andover Historical Societies in 1992. According to the Plan of Andover, Joseph Ballard’s home was located on what is today Porter Road, near Sunset Rock and the Carriers.

Joseph Ballard died on Sept 29, 1722. He is buried in the South Parish Burial Grounds (established in 1711) on Central Street in Andover. His grave is not marked.

The Plan of Andover in the Province of Massachusetts Bay, Essex County, 1692, places Joseph Ballard’s home at 37 Porter Road. The house that stands there today was built by a Joseph Ballard in 1758, so likely a descendant (although NOT his son Joseph, who died in 1732). Private Residence. Not open to the public.

The house that stands at 37 Porter Road is currently under renovation.

The Ballard family plot in the South Parish Burial Grounds. 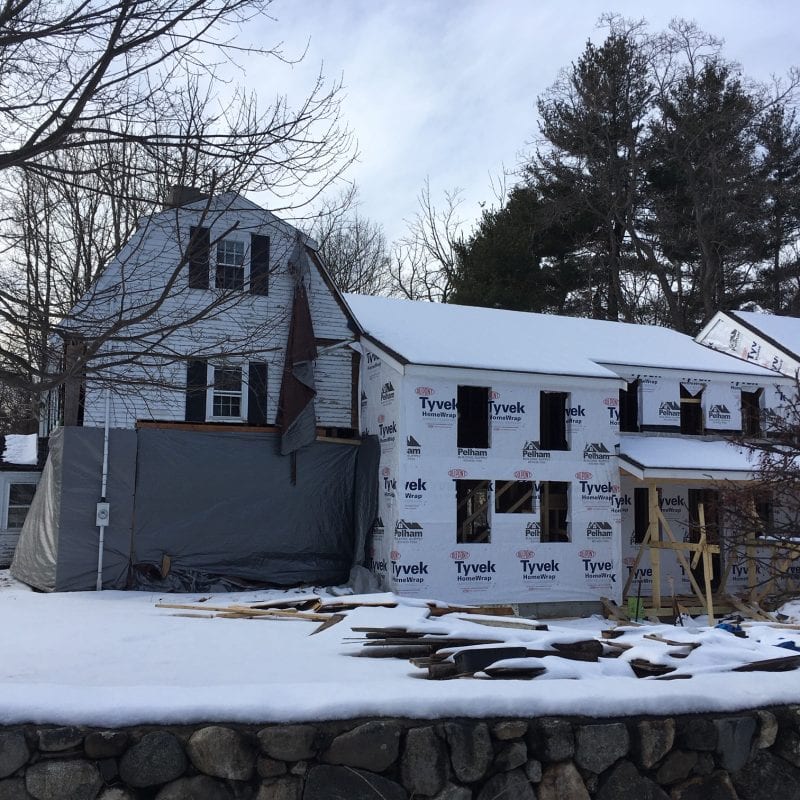