The intersection of MacArthur Boulevard and Gates Street is the approximate location of the Sheldon property in 1692, in a development to the east of Route 114.

Susanna Sheldon was one of the afflicted accusers in 1692 and lived with her family near the center of Salem Village, next to the Nurse property.

Susanna (alternate spelling Susannah) Sheldon was 18 years old and lived with her family near Francis and Rebecca Nurse and the center of Salem Village in 1692. The Sheldon home was just south and west of the Nurse property, near Route 114 today, in the general area of MacArthur Boulevard.

A refugee from the Native wars in Maine, Susanna had experienced her first attack in 1675 during King Philip’s War, when she was not yet two years old. She and her parents sheltered in a garrison in Black Point (present-day Scarborough) to survive. On the following day, her uncle was killed by Natives in the nearby village of Dunston. The family fled to Salem at the next attack, but returned to Black Point in the early 1680s. Another attack in 1688 forced the Sheldons to leave the area for good. They relocated to Salem Village. Susanna’s ten-year-old brother Nathaniel died about this time, “distracted.” Two years later, her 24-year-old brother Godfrey was killed by Natives in Maine.

In early 1692, her 68-year-old father Will died from an infected leg wound, an injury he had sustained during a Native attack in Maine. The depleted Sheldon family now consisted of a mother, five daughters, and one son, Ephraim. Their circumstances were greatly reduced, having lost their Maine farm and the men of the family.

When the witchcraft delusion began, Susanna was possibly suffering from Post-Traumatic Stress Disorder. All of the loss she had suffered made her a perfect person to experience “afflictions.” Her visions were more vivid and violent than some of the other accusers, and involved almost everyone who was suspected.

Susanna saw visions as early as April 24, including the specter of Philip English who, she said, climbed over the side of his pew to torment her in the Salem Town meetinghouse. For the next two months, she was tormented by the specters of English and his wife Mary, Goody Buckley and her daughters, Giles Corey, and Bridget Bishop. She saw familiars of all kinds: hairless kittens with human ears, yellow birds, snakes, black cats, pigs, and turtles. She was pressured by all to sign the Devil’s book.

In May, her visions became particularly violent. Around May 8 and 9, the specter of Reverend George Burroughs threatened to kill her if she testified against him. At Ingersoll’s ordinary Burroughs’s specter bragged of killing three children and two of his wives (one by choking, one by smothering). Then the specter of John Willard threatened to cut Susanna’s throat if she told of his murdered victims. Her descriptions of Willard’s victims were detailed and gruesome: one, she said, “lifted up his winding sheet and out of his left side he pulled a pitchfork and put it in again and likewise he opened all their winding sheets and showed all their wounds.”

Philip English was her main tormenter. His specter continued to visit Susanna in late May, threatening to cut her legs off with a knife. She also had visions of an angel who encouraged her to tell everything she knew.

Sheldon fled to Providence, RI before the trials were over. The records indicate she was summoned before the Providence City Council in 1694 – why is unknown, but she was referred to as a person “of Evill repute” and may have been indigent at the time. It is thought she died by 1697.

Intersection of MacArthur Blvd. and Gates Street, the approximate location of the Sheldon home.

Another view of MacArthur Blvd. and Gates Street. 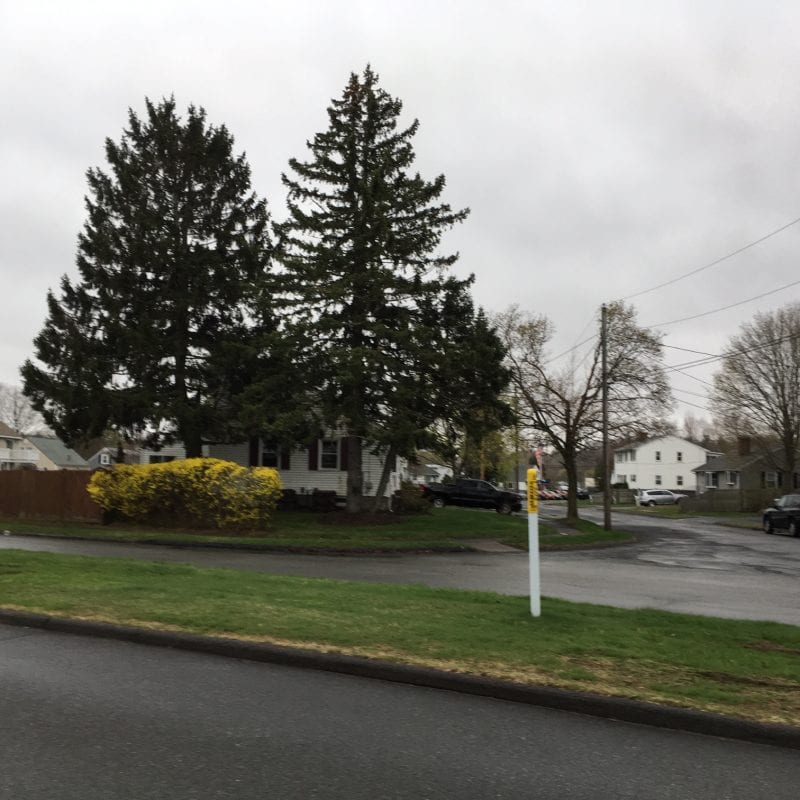