Welcome! Prior to purchasing your tickets, please note that we are requiring all visitors to wear masks in the Museum. THERE ARE NO EXCEPTIONS at this time. CLICK HERE for detailed information on how to visit Salem and the Museum. Please note - Tickets are sold ONLINE and we highly recommend purchasing them before you arrive. Note that we cannot switch your ticket times and WE DO NOT REFUND IF YOU MISS YOUR PRESENTATION.

To the west of Salem, MA is the city of Peabody, MA,  originally settled as part of Salem in 1626. Three residents of the area were executed during the Salem Witchcraft Trials of 1692.

More About Welcome to Peabody

Originally settled as part of Salem by colonists who arrived with Roger Conant in 1626, the area to the west of the Salem waterfront was known as Salem Farms or the village of Brooksby. The farmland provided food for the ever-expanding Salem Town community to the east. Its many brooks and ponds saw the early development of grist mills. By 1711, it had its own meeting house in what is today known as Peabody Square.

In 1752, the area formerly known as Salem Village to the northwest of Salem, joined with the village of Brooksby and separated from Salem. Together they became Danvers, with a combined population of approximately 1400 people. The southernmost area had its own church and was known as “South Danvers Parish.” In 1855, the community was incorporated as the distinct town of South Danvers, and then in 1868, the name was changed to Peabody, named after George Peabody, noted philanthropist. In 1916, Peabody was officially granted city status.

The area’s many waterways led to the development of more mills, particularly tanneries, in the 1800s through the mid-1900s. Peabody was colloquially called Leather City or Tanner City. The tanneries attracted many immigrants, among them Irish, Russians, Turks and Kurds. By 1915, a third of the city’s residents were immigrants.

Today, Peabody is known for the Northshore Mall (originally opened in 1958), Centennial Park (home to medical and technology companies), and the historic Brooksby Farm. The city’s population was just over 53,000 people in 2018.

In 1692, several people from the area were accused of witchcraft, and three – John Proctor, Giles Corey, and Martha Corey – were executed.

Birthplace of George Peabody for whom the town of Peabody was named in 1868, at 205 Washington Street. 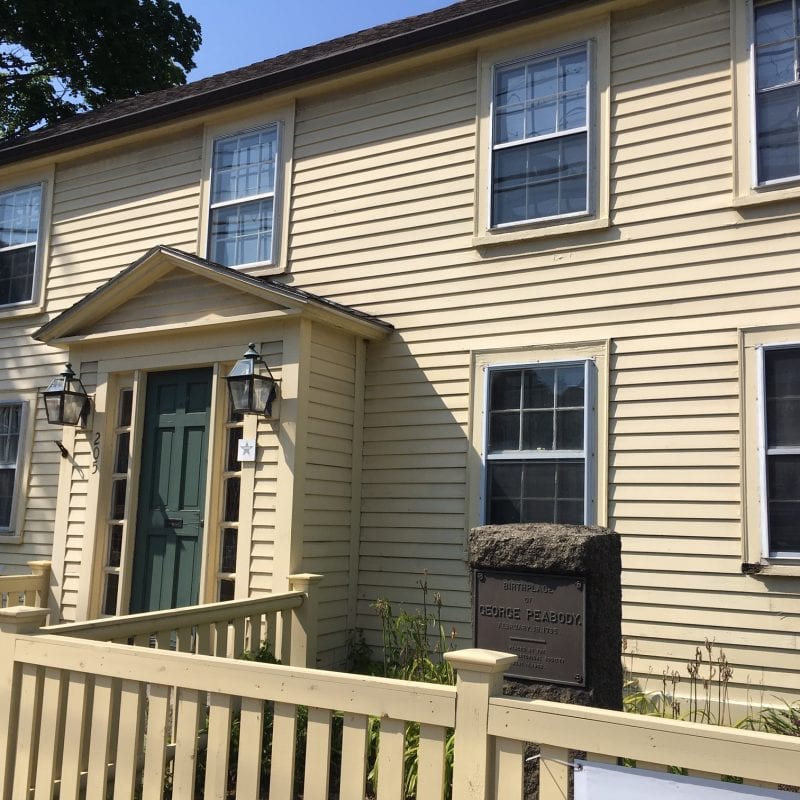