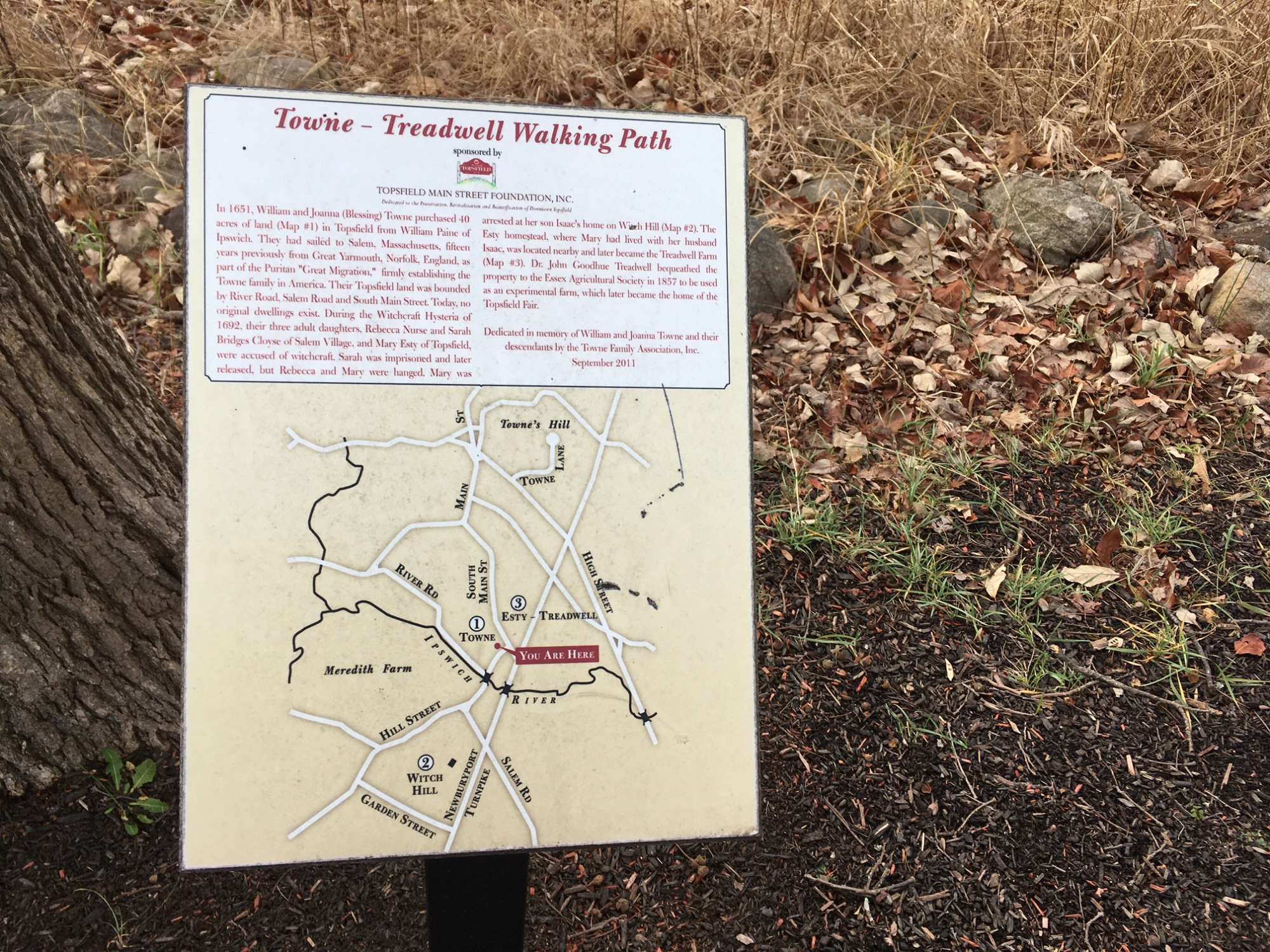 The three living daughters of William and Joanna Towne were accused of witchcraft in 1692. Two of them, Rebecca Nurse and Mary Easty, were executed.

More About William and Joanna Towne Home, Site of

The three living daughters of William and Joanna Towne were accused of witchcraft in 1692. Rebecca Nurse was hanged on July 19, Mary Easty was hanged on September 22, and Sarah Cloyce escaped the hangman’s noose. Fortunately, their parents did not live to see these tragic events unfold.

William Towne and Joanna Blessing were married at the Church of St. Nicholas in Great Yarmouth, England on March 25, 1620. A decade and a half later, along with three of their four living  children (among them Rebecca and Mary), William and Joanna arrived in New England. Their son Edmund followed a few years later. Two more children, including Sarah, were born in the new world.

The first evidence of William in the Essex County records is 1640: “… granted to Wm. Towne, a little neck of land right over against his house on the other side of the river.” This was in Northfields, half way between Salem Town and Salem Village, on what is today the Waters River (which made him a neighbor of George Jacobs, who was himself hanged for witchcraft in 1692.)

In 1651, William left Salem, buying approximately forty acres of land in Topsfield, which he added to in 1656. Most of this property was bordered by Salem Road (originally laid out in 1656), South Main Street, and River Road along the Ipswich River to the south (there were also two acres of meadow on the south side of the river). The Towne house stood near the intersection of Salem Road and South Main Street.

Close to the southeast corner of the property was what is thought to be the oldest bridge built in Topsfield, which crossed the Ipswich River. A rudimentary bridge was built in 1653, followed by a more substantial one in 1659. Formerly called Town Bridge and constructed of wood, today it is known as Balch’s Bridge and has been made of cement since 1931. Picturing seventeenth century Topsfield is made easier by historian George Francis Dow’s 1940 book History of Topsfield, Massachusetts, in which he says, “An old way led from William Towne’s, across what is Route 1, through other farms and connected to a way that led to John Wildes’.” Wildes’ second wife Sarah was also hanged for witchcraft.

Upon the marriage of his son Joseph in 1663, William conveyed to him 2/3 of the homestead, and then the Townes lived with Joseph until William died in 1673. Joanna lived for another decade, dying in 1682.

As Towne descendant Edwin Eugene Towne said in his book The Descendants of William Towne, published in 1901, when discussing the deaths of William and Joanna, “’Taken away from the evil to come’ might have been the epitaph on their tombstone, in view of the terrible fate of their daughters, some ten years later.”

The family had stayed nearby. Oldest daughter Rebecca married Francis Nurse in the 1640s and lived with him in Salem Village. Daughter Mary married Isaac Easty before 1656 and lived across South Main Street from the Towne property. Sarah married blacksmith Edmund Bridges Jr. in 1669/70. They also lived near the Towne land initially, but eventually moved to Salem Village near the Topsfield line. When Edmund Bridges died around 1681, Sarah briefly returned to Topsfield but according to George Francis Dow, she was ordered out of town, along with her children, on September 12, 1682, likely because she had no means of support. Shortly thereafter, Sarah married Peter Cloyce and lived with him in Salem Village.

The three Towne daughters, all of whom appear to have been hard-working, pious, and upstanding citizens suffered terribly in 1692: accused, arrested, jailed, and, in Rebecca and Mary’s case, executed. What made them targets of accusation?

One event from the past may have contributed. One 1692 account suggested their mother Joanna might have been accused of witchcraft twenty years earlier, and in the seventeenth century, it was believed witchcraft was spread in family members, particularly through the matriarchal line. What had Joanna done to attract gossip?

Reverend Thomas Gilbert was the first ordained minister of Topsfield. He began to lead the congregation in 1663 and remained in Topsfield until 1671 when, according to Dow, “… he was tried for intemperance and as there was no doubt of his guilt, his connection with the church was severed, the minister manifesting as much grief as anyone. The charge was not on account of his use of wine, but, because of his coming intoxicated to the Lord’s table.”

Joanna Towne testified on Gilbert’s behalf, saying she had witnessed the incident in question and stating the reverend had not had too much to drink. Her defense of Gilbert contradicted the testimony of the very powerful Captain John Gould. In addition, it was said Joanna had been heard speaking ill of her daughter-in-law’s mother, Phebe (Gould) Perkins, the oldest daughter of Zaccheus and Phebe (Deacon) Gould. Zaccheus’s sister Priscilla was the wife of Putnam patriarch John Putnam of Salem Village. Making enemies of the Goulds and the Putnams was not wise. Perhaps Joanna became a target for going against them.

The other factor that surely made enemies of the Salem Village Putnams (third-generation-born Thomas Putnam Jr., his wife Ann, and his daughter Ann Jr. were the principal accusers during the witch trials) was the years-long, generational border disputes between Topsfield and Salem Village, which were often decided in Topsfield’s favor. In fact, the boundary disputes may have been the main reason behind the accusations of the Towne daughters, as well as Sarah Wildes and Elizabeth How. Says Dow, “Throughout this suit and the several others that followed, the names of How, Towne, Estey, Baker, and Wildes frequently appear, either as members of a committee representing Topsfield or as witnesses before the Court, while on the Salem side we have the Putnams.”

Today, border disputes and defending a minister might appear to be flimsy reasons for accusing someone of witchcraft, but in the seventeenth century, the rights to land and timber were crucial, and the Putnams and Goulds were dangerous enemies to have.

A Towne property sign, near the intersection of South Main Street and Salem Road.

Looking at the Towne property from Salem Road.

Looking across the Towne property toward South Main Street. The yellow building in the distance is approximately where Isaac and Mary Easty lived.

River Road runs along the north side of the Ipswich River.

Balch's Bridge crosses the Ipswich River near the southeast corner of the Towne property.

A 17th century Towne family window, on display at the Peabody Essex Museum, 2021. It is unclear what Towne home this was from.

Peabody Essex Museum information about the Towne window on display. 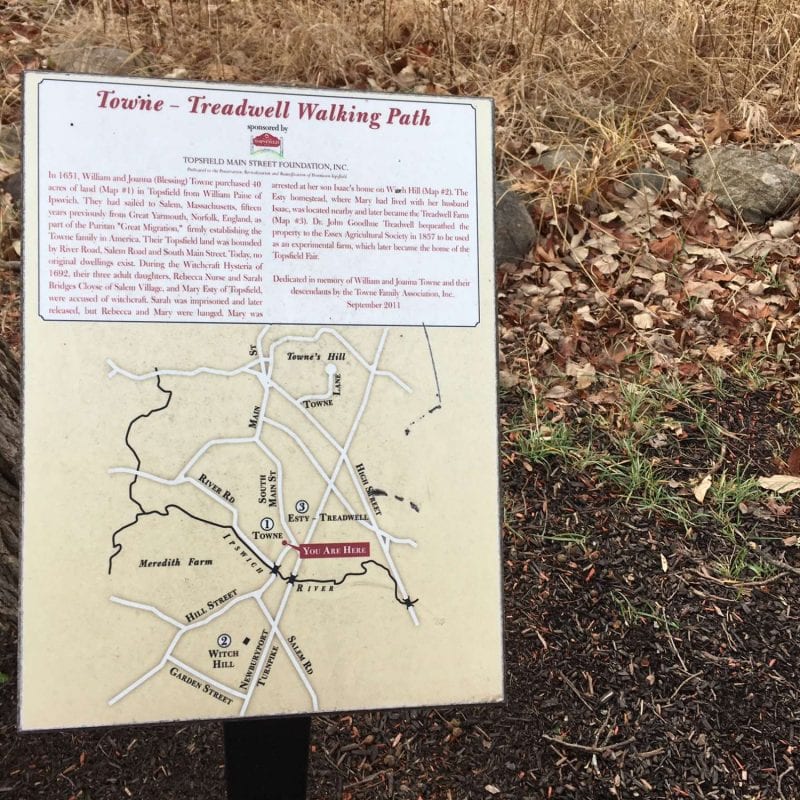 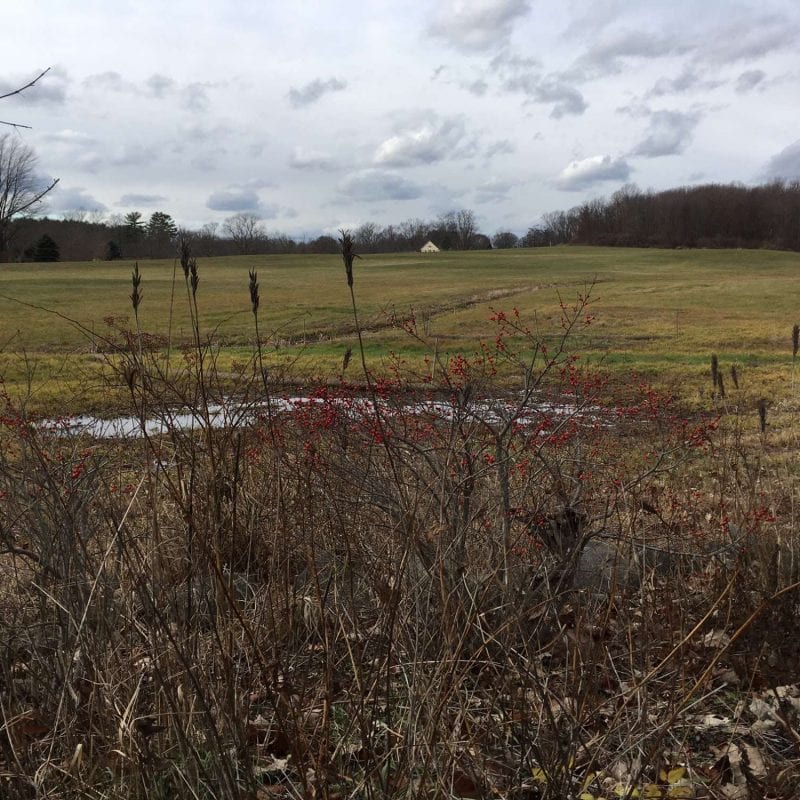 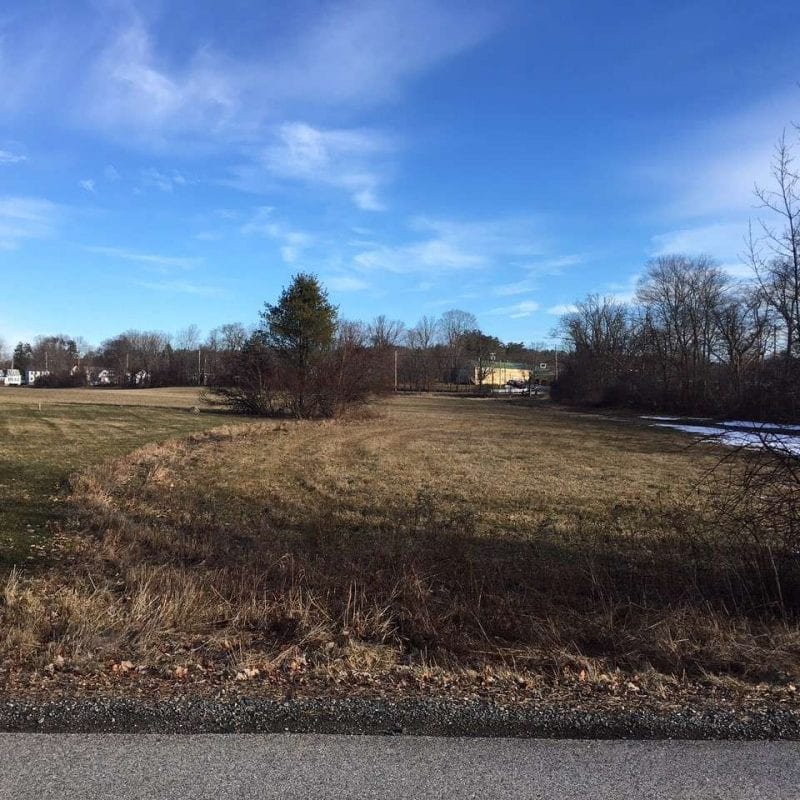 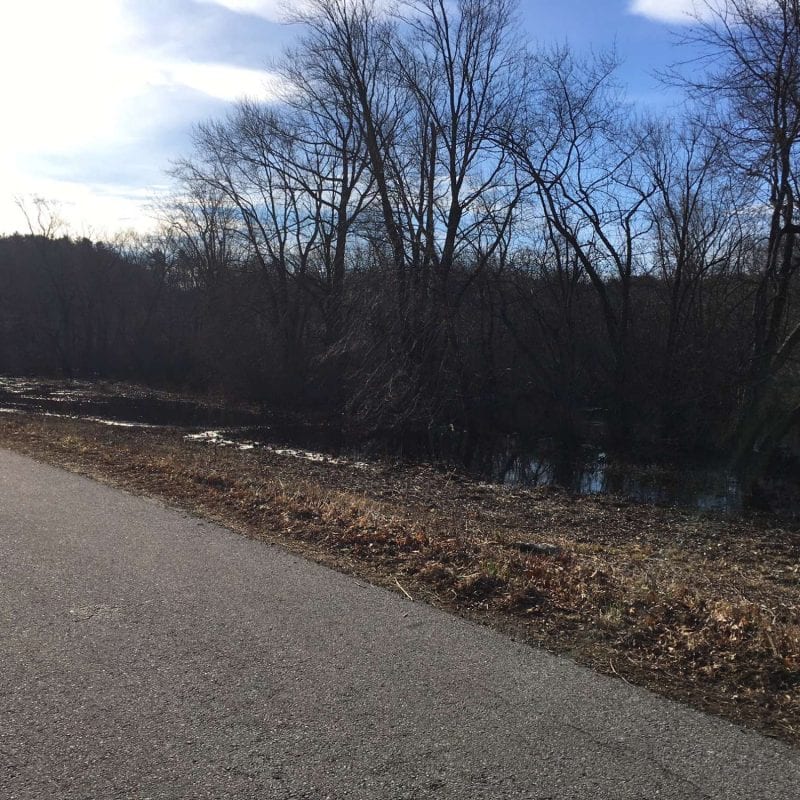 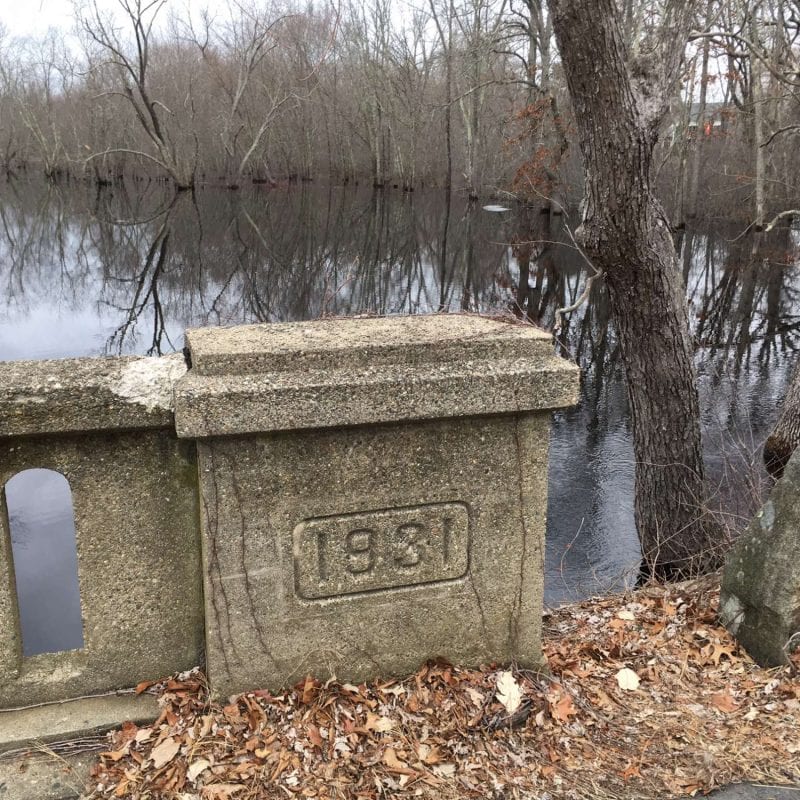 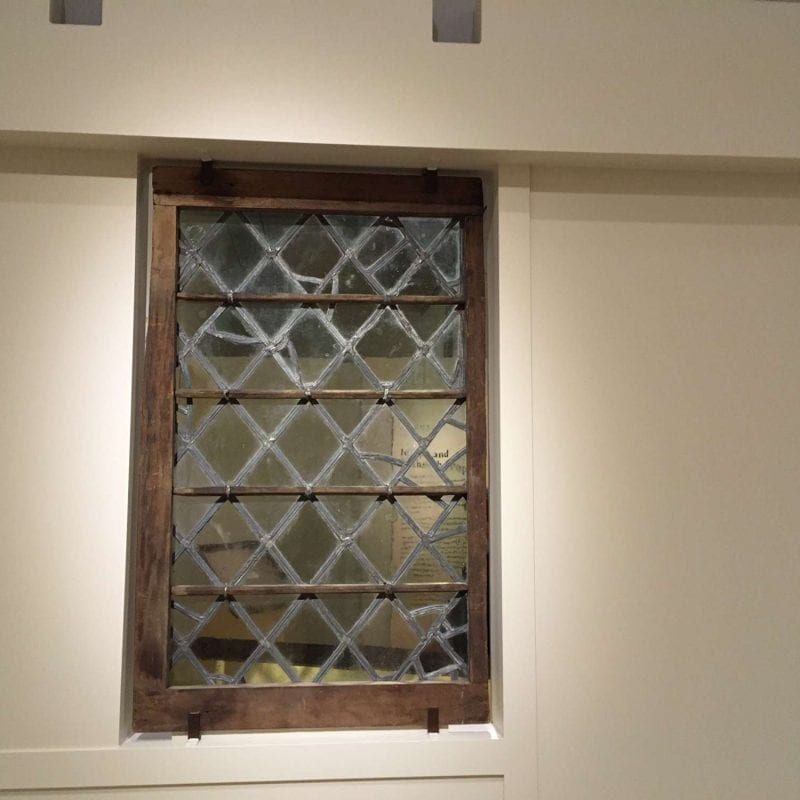 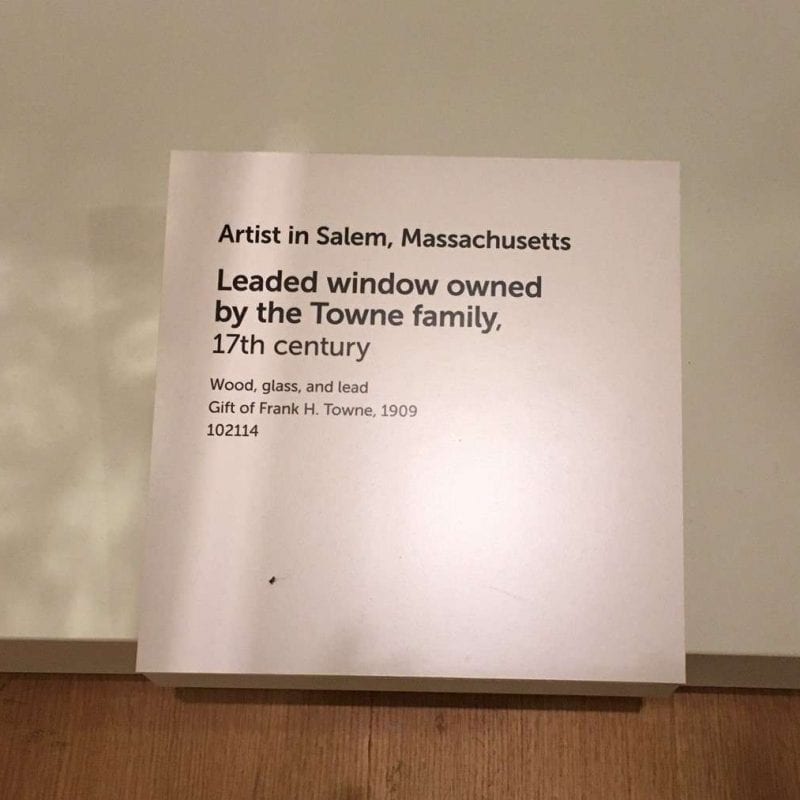