Growing up in early New England was not easy. The pilgrims landed in Plymouth in 1620, and found themselves in a new, harsh, and foreign land. They faced cold, long, dark winters and a land filled with unfamiliar resources. In order to survive, the early settlers had to adapt, work together, and learn about their new surroundings.

Salem was founded in 1626 by Roger Conant. Upon their arrival, this new group of immigrants set about the hard task of establishing a permanent settlement. With time, colonists were able to move inland and establish new communities. This settlement was first named Naumkeag, meaning “good fishing” or “fishing place.” Due to the large and accessible harbor, Salem eventually grew to be an important port city.

Below are several hands-on learning activities intended to enhance student’s understanding of life in colonial New England. While these activities may be completed individually, we recommend parents or teachers supervise each lesson.

A list of questions proceeds each activity. Students should take a moment to either verbally discuss each question or jot down short responses before beginning. Each hands-on activity includes a brief introduction to the topic of the lesson. These short paragraphs provide relevant information about life in the seventeenth century. Every lesson includes a list of materials and step-by-step instructions. Before finishing, students should consider the list of closing questions. As they did at the beginning of the activity, participants are encouraged to discuss these questions or write responses.

While we include recommended grade levels for each lesson, these activities are fun, easy, and can be used with learners of all ages!

Before beginning these activities, try answering these questions about life in early America:

Children’s Life in the Seventeenth-Century

Family was extremely important in early American life. A typical family consisted of anywhere between 10 to 20 siblings. Though sadly not all of these children would make it to adulthood in the rough conditions of early New England, it was normal to have an extremely large family.

Children were expected to participate in household chores almost from the moment they could walk, typically beginning as early as five years old. Because the early settlers had to make almost everything in their home, from their food to their clothes, chores were very different from the ones you might be expected to complete at home today. Girls learned how to spin yarn, sew, help prepare food, and mind younger siblings. Boys were taught to tend cattle, plant and harvest, and were introduced to other useful skills like hunting and fishing. Typically, both boys and girls learned how to read, as they were expected to be able read the Bible. Often schooling took place at home, after a full day of work, or during the winter months. Once children, especially girls, reached a certain age they would often be sent out of the house to live with relatives or work for another family.

The children of early America dressed very differently than kids today. As babies, boys and girls both wore long dresses. When a child was learning to walk, they might use “leading strings.” These were long strips of fabric sewn onto their clothing that allowed adults or older siblings to help an infant learn to stand.

Around the age of 4, boys would begin to wear doublets (a jacket that men wore into adulthood), though they still wore skirts for several years. Boys would begin wearing “breeches” (pants) when they were between six and eight years old. This was considered an important rite of passage in a boy’s life. When young men transitioned into wearing breeches, they would also begin to wear a frock coat, waistcoat, and hat. Girls continued to wear gowns throughout their childhood years. A grown woman would wear a long-sleeved wool waistcoat, a bodice that had stays (stiffened supports, often made of bone), and a petticoat (multiple layers might be added to the petticoat to give additional warmth during the winter). Both men and women wore a long shirt or dress made of linen (a cloth made from flax plants) under their clothing as underwear. Typically, men and women also wore something around their neck such as collars, or linen kerchiefs, and both genders wore head coverings. Men and boys wore wool caps or hats, while women wore linen coverings over their hair called coifs.

At first, colonists brought as much of their own clothing and bedding to the New World as possible. Over time, they began to produce crops that could be spun into fabric. The dominant fibers used for cloth in early America were hemp, flax, and wool. Flax in particular was important, as nearly every farmer in New England grew it for clothing, bedding, and other cloth needs. It is a common mistake to assume Puritans only wore black and white. Earth tones were the most available dyes, and were often used when making clothing. However, in addition to these earthy colors, we know early settlers also owned colorful clothing, including violet, orange, blue, and even red.

Make your own Fabric Doll 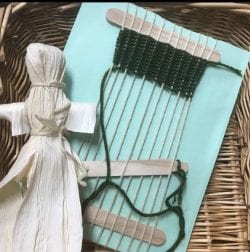 Make your own Popsicle Stick Loom

Before beginning these activities, try answering these questions about life in early America:

Children’s Activities in the Seventeenth Century

Though children were put to work at an early age in colonial America, younger children were still allowed a degree of freedom for play. Many people think of the Puritans as strict and stern parents who forbid fun or games. While Puritans lived a serious, structured life, they also danced, drank alcohol, told jokes and riddles, and sang. For the Puritans, life was all about moderation—fun activities had their time and place, and were encouraged when combined with hard work and a life of sincere religious practice.

Children were expected to participate in household chores almost from the moment they could walk, typically beginning as early as five years old. Girls learned how to spin yarn, sew, help prepare food, and mind younger siblings. Boys were taught to tend cattle, plant, harvest, hunt and fish. Both boys and girls learned how to read, as they were expected to be able read the Bible. Though children were expected finish their chores, they were given time for play and fun. Puritans believed play was a way to rest, and was perfectly acceptable as long as it did not detract from work (again, everything in moderation!).

It was typically between the ages of seven and fourteen that children were expected to leave youthful activities behind and to seriously prepare for adulthood. However, we know adults had fun in their free time as well! They danced, particularly at weddings or celebrations, and played games and sports. These activities were allowed, at appropriate times, when work was finished. Not every person was able to live up to the standards of moderation, as there are records of adults getting in trouble with the law for playing games at inappropriate times! 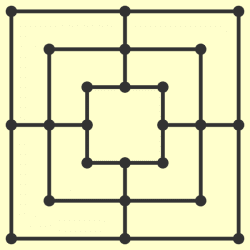 This game has very old roots, going back as far as ancient Rome. Nine Men’s Morris is played like a combination of our modern-day tick-tack-toe and checkers.

Before beginning this activity, try answering these questions about life in early America:

Before beginning the activity, consider this brief reading:

The early years were hard for the colonial settlers. However, with the aid of Native Americans, particularly with the help of Squanto of the Pawtuxet tribe, the early settlers were able to adapt to their new environment and eventually learned to thrive.

Though unfamiliar at first, the settlers found the new world was filled with plentiful resources. Fish, oysters, eels and lobsters were particularly important resources. Other available meats included turkey, goose, bear, deer, fox, rabbit, beaver, squirrel, raccoon and pigeon. In addition, the settlers learned how to grow and harvest native vegetables, such as beans, legumes and pumpkin. Massive lobsters, weighing sometimes as much as 25 pounds, were quite typical in early New England. Interestingly, lobsters were initially viewed as a lower-class food that could be eaten when needed, but was by no means the treat it is today

Favorite dishes of this period included eel pie, leek soup, stew of pork and apples, roasted beaver tail, and turtle. Beer, hard apple and pear cider (called perry) were consumed by the entire family, including children, as it was deemed far safer than water. Tea, coffee, and rum were also common drinks.

Sugar was very precious in the Colonial Era. Most could not afford this luxury. Those who could afford this special treat kept it locked away in sugar boxes or sugar keepers. In their baking colonists would typically substitute sweeteners with more available crops, such as honey or maple sap.

In the seventeenth-century,the main meal of the day was eaten in the early afternoon. The kitchen was typically the center of the house. The kitchen fire, though dangerous to an untrained hand, dominated women’s lives. Women’s kitchen work included cooking meals, food preparation, baking, brewing beer and ales, care of poultry and the family garden, and even preparing certain medicinal remedies. Girls would be expected from a young age to begin learning to help in the kitchen, as it would be their job to run a kitchen when they grew older.

This unleavened cornmeal bread, known alternatively as a johnnycake, a hoe cake, an ash cake, or corn pone, was one of many important corn dishes that sustained early New England residents. When settlers first arrived in New England in 1620, they initially had trouble growing some of the familiar crops from back home. Wheat crops in particular took several crop cycles to successfully grow. As a result, settlers had to turn to native crops like corn and pumpkin for the bulk of their meals. Corn in particular became a staple in these early diets, used more often as a substitute for bread than as a vegetable.

Though many early dishes included cornmeal, such as the cornmeal dumplings filled with fruit called “slumps,” johnnycakes are an excellent illustration of an easy to make, common dish eaten by early New England settlers. Some believe the name came from the title “journey cake,” as these cakes were durable and could be brought on long journeys. These cakes became particularly beloved in Rhode Island, where they are still a favorite food to this day