March 13, 2020 marks the one-year anniversary of the Witches: Evolving Perceptions exhibit renovation. On this day, years of hard work and planning were finally realized in this major interpretive planning update and exhibit remodel.

Witches: Evolving Perceptions was created in 1999 in an effort to connect the history of the Salem witch trials with the broader definitions of witchcraft depicted in popular culture today. This exhibit examines the European witchcraft trials, the evolution of the definition and iconography associated with the term “witch,” and the broader historical phenomenon of witch-hunting.

It can be startling to realize how dramatically our understanding of history changes over time. As scholars continue to make new discoveries, employ different modes of analysis, and look deeper into specific periods and events, we gain an ever more intricate understanding of the past. Information that was thought to be true 10 years ago can become dated, dragging behind the newest scholarship. This is particularly true in regards to the study of witchcraft. Over the past 50 years we have learned so much about historic witch trials. For example, for most of the twentieth century it was common to read that millions of accused witches were burned at the stake during the early modern period. It was only after decades of research that historians began to come to a more accurate figure, estimating the number is most likely closer to 45,000-60,000. As such, the way we interpret history must change to reflect new scholarship. This can be a big challenge, especially for small museums. Gathering the latest research, producing a new interpretive plan, and creating exhibit content that is relevant and engaging for modern audiences is no simple task.

Updates to Witches: Evolving Perceptions have been ongoing since the winter of 2017. The process began when our Director of Education, Rachel Christ, sought to create a new timeline of witchcraft history for the exhibit. The timeline covers a large wall and is a major focal point in this space. Adding entirely new, color-coded panels, this display became a more effective illustration of the rise and decline of witch trials in Europe and its North American colonies. The next major alteration came in 2019, when a display was added featuring a newly acquired first edition of L. Frank Baum’s The Wonderful Wizard of Oz. Around this same time, we also added several artifacts to a display highlighting early modern folk magic. While these were certainly steps in the right direction, we knew the exhibit would ultimately need a revitalized interpretive plan and major renovation.

We planned to complete this update in March of 2020. This project required an enormous amount of planning and preparation. Rachel Christ created new narrations to accompany three tableaus. These scenes are spaced throughout the room and portray different definitions of the witch– the historical crime of witchcraft, the stereotypical pop-culture witch, and contemporary Neopagan practitioners. One of the most significant changes to the exhibit was the replacement of the tableau featuring a pagan midwife with a new scene depicting two women accused of witchcraft in the sixteenth-century. The inclusion of a pagan midwife in the original exhibit was based on older scholarship and this was ultimately the element of this exhibit that needed the most attention. The new tableau depicts two women, both over the age of 40, one from the Holy Roman Empire and the other from Scotland, both areas with some of the deadliest witch trials. Though these women are fictional characters, this scene is intended to immerse visitors in the lived experience of the individuals who were the most susceptible to an accusation of witchcraft. As we prepared for this update, we expected the exhibit to include a tour given by a docent. Visitors would be guided through the exhibit, stopping at each tableau to experience the narration. In the months leading up to the installation, a new tour was written and distributed to staff, who were busy memorizing the new content.

The new narration was brought to life by Myriam Cyr of Punctuate4 Productions. An award-winning director, actress, and author, Myriam Cyr came to this project with her own passion for the history of witchcraft, having directed Saltonstall’s Trial, a play about Nathaniel Saltonsall, the only magistrate to step down during the Salem witch trials. Myriam directed the recording of the new narrations and even stepped in as an actress when needed. After directing the recordings, Myriam spent countless hours with Rachel and R. Berred Oullette, Sound Designer extraordinaire, editing, selecting music and sound, and adding theatrical flair to these narrations. Actresses Ashley Risteen and Barbara Bourgeois provided vocals for the two European women accused of practicing witchcraft. Carol Goans, recipient of Broadway World Regional 2020 Awards for Best Performer of The Decade (Non-Equity), voiced the stereotypical witch. One of our Museum’s own, Jon Zuluaga, voiced the male Wiccan, with Myriam as the female Wiccan.  Each voice is emotionally charged and accentuated by Berred’ s precision editing and music selection.

In addition, we would also like to recognize the efforts of Museum CFO Jenny Connors for budgeting this installation, as well as CEO Biff Michaud, who supported this effort and acted as a sounding board for the initial script reads. Both of these individuals were enormously helpful throughout the entire process, and even filled in to help make decisions regarding details such as the sound effect selection and music once the narrations were presented.

At 5:00 on Friday, March 13, we gathered at the museum to begin the installation. Visual changes were made to the first tableau by set designer Kristin Loeffler, assisted by two workers from Limone Construction. These changes included adding two types of flooring salvaged from an old New England home, dried herbs, and new wall treatments, to give the impression of two distinct sixteenth century dwellings. Considerable research and deliberation went into this design, as we wanted to make this scene as historically accurate as possible (down to the detailing of the window!). Nancy Cook, an expert in historic clothing, masterfully crafted and hand sewed outfits for each of the figures in this tableau. She too conducted research to ensure both of these outfits were period appropriate and reflective of the respective fashions of Scotland and the Holy Roman Empire. Rick Macomber of Macomber’s Electricians and Michael Dynice of We Roadie and Grip, Inc. also added new lighting and illumination to the scene. In addition to those already named above, seventeenth-century expert Peter Cook, Executive Director Tina Jordan, Assistant Education Director Jill Christiansen, Director of Customer Service Faxon Michaud, and Rachel Christ assisted in the installation process, adding new clothing to the third tableau, organizing supplies, and providing support and feedback. With hopes of unveiling the exhibit as soon as possible, we left at 12:30 am, having completed a 7-hour installation. Though closed to the public, over the next several days small groups were able to come to the museum to add final touches to the exhibit. Lead Manager Jay Menice laid the dirt floor, Rachel Christ adjusted the clothing, and George Fox hung the final herbs, all with guidance and assistance from Tina Jordan. Unfortunately, it was at this time that the reality of the COVID-19 pandemic became vividly apparent, as the entire country went into full lockdown.

Over the next several months, Berred Oullette, Tina Jordan, and Rachel Christ worked together (virtually) to create an audio tour for the new exhibit. Though we had originally planned to implement an updated guided tour, we felt this pivot would make the environment safer for our visitors and staff when we reopened. Voiced by former Salem Museum staff member (and creator of Witch Trials Weekly) Katharine Jordan, a modified script was recorded in a padded closet in her home in Chicago. Through the marvels of modern technology, Berred took this narration and wove it together with the tableau narrations, resulting in a brand new audio tour.

On June 24, 2020, the new Witches: Evolving Perceptions exhibit came together. Thanks to the work of Museum Technology Source Michael Callahan, we were able to play the newly combined narrations and audio tour on speakers mounted throughout the exhibit. As a result, visitors would now be able to stand on social distance markers and move through the exhibit, guided by the voice of Katharine Jordan.

On July 6, 2020, the exhibit was finally unveiled to the world when the Salem Witch Museum reopened to the public. We hope this exhibit will give our visitors a deeper understanding of this complex and fascinating history. Looking back one year later, we were so fortunate to complete this project. This was accomplished through the hard work and creativity of many dedicated individuals. As travelers slowly begin return to the city of Salem, we are extremely excited to welcome our visitors to the new and improved Witches: Evolving Perceptions. Though COVID-19 has altered our timeline, we have confidence we will be able to continue moving forward with our plans to update the entire museum in the years to come. 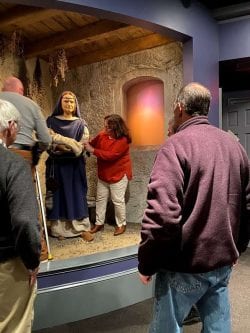 Tina Jordan and Michael Dynice in the old set 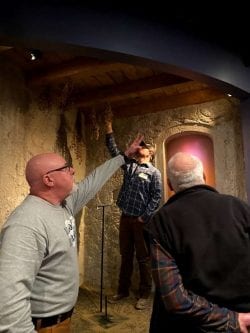 And so it begins! Faxon Michaud taking down dried herbs, Michael Dynice and Michael Callahan working on updating the technology. 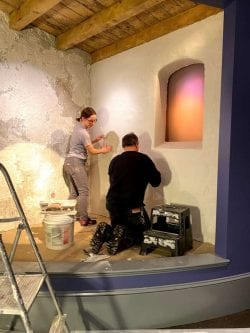 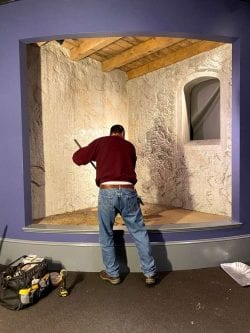 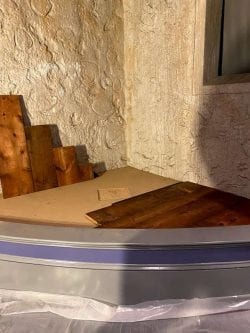 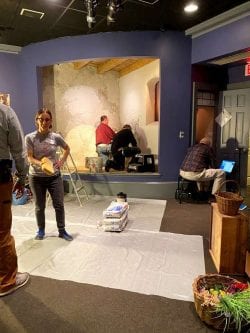 Everyone hard at work! 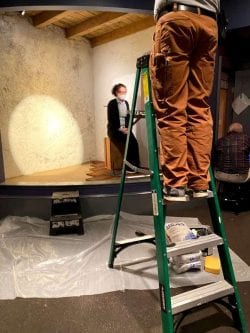 Adjusting lighting using Myriam Cyr as a stand in for the figures while they were being dressed by Nancy Cook. 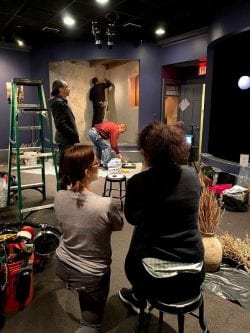 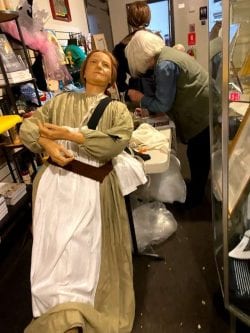 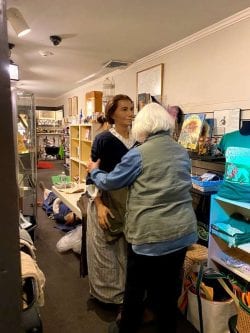 Nancy Cook sewing costumes onto figures in the museum store– When working in a historic building, you use whatever space you have! 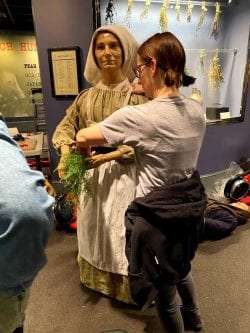 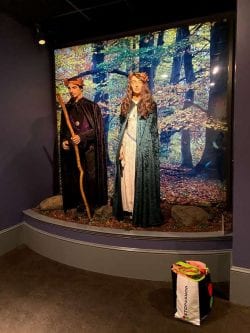 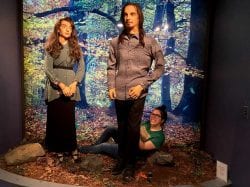