Although condemned to hang for the crime of witchcraft, 40-year-old Abigail Faulkner escaped execution because she was pregnant with her seventh child in 1692. The trials had come to an end by the time her baby was born.

More About Abigail and Francis Faulkner Home, Site of

Forty-year-old Abigail Faulkner, one of the lucky few in 1692 who was condemned for practicing witchcraft but escaped execution, lived with her family a short distance to the north of Andover’s original compact village, on the road that led to Haverhill and the ferry over the Merrimack. Today, this area is in North Andover.

Abigail was one of more than twenty-five members of Andover Reverend Francis Dane’s immediate and extended family to be caught up in the witch hysteria. She was Dane’s youngest daughter, married to her husband Francis since 1675, mother to five living children, and pregnant once more as the witch-hunt exploded in Andover. Her condition saved her life.

Sometime in the late 1680s, Francis came down with a mysterious illness that caused him to have convulsions and memory loss. Abigail had shouldered much of the burden of looking after her family and household during the time he was incapacitated which, suggests Richard Hite, author of the book In the Shadow of Salem: The Andover Witch Hunt of 1692, may have helped her develop the strength and determination that she would need in the years to come.

Although the diabolic torments began in the winter of 1692 in Salem Village, a town more than fifteen miles away, the swelling wave of fear that witches had arrived in Massachusetts Bay Colony reached Andover by the end of May. An argumentative and forceful woman named Martha Carrier was the first to be accused and arrested. In July, when the husband of an ailing woman invited two of the purportedly bewitched accusers from Salem Village to visit Andover and tell him if his wife’s sickness was caused by witches, they confirmed his worst fears. New witchcraft allegations subsequently multiplied, eventually making Andover the town with more people accused than any other.

Over August and September, Abigail and two of her children, 12-year-old Dorothy and 9-year-old Abigail Jr., were accused, arrested, and jailed. Also caught in the web were Abigail’s sister, the widow Elizabeth Johnson, and three of her children, aged 22, 13, and 11, as well as their sister-in-law, Deliverance (Haseltine) Dane, who was married to their brother Nathaniel.

Many of the Andover accused immediately confessed to practicing witchcraft, believing by this time that it was the only way to save their lives. Abigail was unusual in that she initially denied any knowledge of witchcraft, saying, “. . . god would not require her to confess that she was not guilty of …”. During a second examination, under relentless pressure, she admitted being angry and wishing harm to the people who hurt her family members. She confessed, at the least, that she might have been used as an instrument of the devil.

Although convicted at her September trial and condemned to hang, Abigail’s execution was delayed due to her pregnancy. A combination of factors – growing public criticism, protests from influential ministers, and an accusation directed at the wife of the Governor himself – led Governor William Phips to dissolve the Court of Oyer and Terminer at the end of October. A new court, one that would not accept spectral evidence, was formed and would start hearing cases again in January of 1693.

Abigail Faulkner was a determined fighter, worried about her family. After spending four months in jail, she petitioned the governor on December 3 for her release, describing her husband’s symptoms which, while they had subsided some years ago, were back, “through grief and sorrow they are returned to him again, as bad as ever they were.” Her request was not granted.

When trials resumed in January, only three of the approximately one hundred people remaining in jail were found guilty of the crimes of witchcraft and covenanting with the devil, among them Abigail’s 22-year-old niece Elizabeth Johnson Jr., who was described by Reverend Dane as “simplish at best.” Abigail’s other accused relatives were granted their release, after payment of jail fees.

At the end of January, immediately prior to the next scheduled hanging date of February 1, Governor Phips reprieved all the condemned, and followed with pardons sometime later. Abigail’s fees were likely paid immediately. She finally returned to her family in Andover where, on March 20, 1692, she gave birth to the baby that saved her life. He was named Ammi Ruhamah, which roughly translated means “my people had mercy.”

On June 13, 1700, Abigail petitioned the General Court of Boston to overturn her conviction, in an effort to regain her reputation and avoid future exposure to accusations. Again, she was unsuccessful.

Finally, in 1703, a petition spearheaded by Abigail and Francis Faulkner succeeded. Three of the still-living condemned, Elizabeth Proctor, Sarah Wardwell, and Abigail Faulkner, were cleared. It took more than 300 years, via legislation in 1711, 1957, and 2001, to reverse the convictions of all but one of the rest.

Still making its way through the courts today (as of February 2022) is the case of Abigail Faulkner’s “simplish at best” niece, Elizabeth “Betty” Johnson Jr. She was one of the last to be condemned and, through an oversight, will be the very last to have her conviction legally overturned.

After 55 years of marriage, Abigail and Francis died in Andover within two years of each other – Abigail in 1730 and Francis in 1732. Both are likely buried in the First Burial Ground in North Andover, although no grave markers remain.

In 1726, Ammi Ruhamah married his cousin, Hannah Ingalls, in Andover. The couple moved to Acton, MA, in the 1730s where they raised their family, and Ammi built what came to be known as the Faulkner Mills, which were in operation for 200 years. Their house is today the oldest colonial structure still standing in Acton, originally built in 1707 for Ephraim Jones.

Ammi and Hannah Faulkner, and their son, Colonel Francis Faulkner – a hero of the Revolutionary War – are buried in Acton’s Woodlawn Cemetery.

According to the Plan of Andover in the Province of Massachusetts Bay, Essex County, 1692, which was created by the Historical Societies of Andover and North Andover in 1992, the family of Abigail and Francis Faulkner lived approximately where the Kittredge Elementary School stands today, on Main Street in North Andover.

Abigail lived in this approximate location before her marriage, with her father, Reverend Francis Dane.

The home where Ammi and Hannah Faulkner lived is the oldest colonial structure standing in Acton.

The historical marker for the Faulkner Homestead.

The grave of Ammi Ruhamah Faulkner. The Revolutionary War marker has likely shifted from his son's grave (to the left).

Col. Francis Faulkner's grave, flanked by his wife Elizabeth and his father Ammi.

A memorial to Edmond Faulkner, original settler and patriarch of the Faulkner family, stands in the First Burial Ground in North Andover, MA. 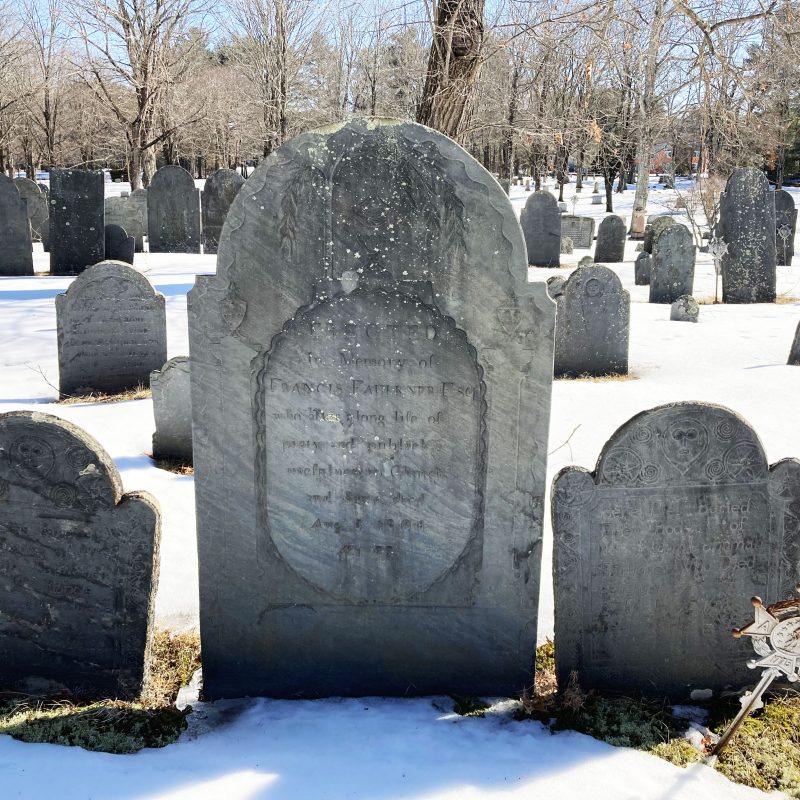