Bridget Bishop was not the first to be accused of witchcraft but she was the first to be executed for the crime in 1692. At the time of the trials, she was married to her third husband, the elderly sawyer Edward Bishop. When arrested, Bridget was living on the property she inherited from her second husband Thomas Oliver, on present-day Washington Street in Salem Town.

On April 16, two women ‑ Bridget Bishop and Mary Warren – were newly accused by the afflicted girls. Two days later, complaints were filed against the two, as well as against Giles Corey and Abigail Hobbs. Those who claimed to be tormented were Ann Putnam Jr., Mercy Lewis, Mary Walcott, and Elizabeth Hubbard. Bishop was arrested on April 19 by Salem Marshal George Herrick and taken to Ingersoll’s Ordinary in Salem Village (modern-day Danvers) where the examinations were held. The afflicted girls writhed and convulsed. “She calls the Devil her god!” said Ann Putnam Jr. Judge Hathorne accused Bishop of afflicting the girls, which she denied. “I never saw these persons before, nor I never was in this place before,” said Bishop. “I am as innocent as the child unborn. I am innocent of a witch.” Judge Hathorne accused her of bewitching her first husband to death, which she also denied. The afflicted girls’ behavior was enough to convince the examiners. Bishop was held for trial in Salem jail, a short distance from her home.

On June 2, the Court of Oyer and Terminer heard Bridget Bishop’s case in their opening session. Perhaps she was tried first because the judges felt she would be the easiest to convict, as she was a marginalized member of the community.

More About Bridget Bishop Home and Orchards, Site of

Bridget Playfer, born sometime in the mid-to-late 1630s in Norwich, England, married her first husband there in 1660. His name was Samuel Wasselbe (alternate spellings Wasselbee and Wasselby). It is unclear whether Wasselbe died before or after Bridget’s immigration to New England, but it is known that the child she was carrying from that union died in infancy in Massachusetts, and the father was already deceased. A previous child of the Wasselbes had died in England. Bridget married for the second time in 1666, this time to a widower named Thomas Oliver, who was also from Norwich, England. The Olivers made their home in Salem Town. The property fronted Washington Street, on the southeast corner of Washington and present-day Church Street (there was no street there in 1692) and included orchards that extended to the east past the location of the Salem Lyceum building, which today is Turner’s Seafood. The couple had one daughter, named Christian. Oliver had three grown children from his previous marriage. Oliver died in 1679 and, around 1685, Bridget married Bishop as husband number three. The Bishops continued to live on the Washington Street property. Bridget Bishop had lifetime rights to the property she inherited from Thomas Oliver, but it was officially “held for Bridget Bishop” by her new husband, Edward Bishop.

Bridget Bishop was a target of witchcraft accusations for a variety of reasons. There was gossip that she was responsible for the deaths of her first two husbands. She had been previously accused of witchcraft in 1680, when John Ingersoll’s slave Juan claimed her specter had pinched him, that she had stolen eggs, and that she had frightened horses. Ten neighbors now testified against her. Among the accusations were stories of her pressuring the afflicted girls to “sign the Devil’s book.” Men who had worked on her house in 1685 told of discovering poppets stuck with pins in her cellar wall, an example of “counter-magic.” Her specter was said to have visited several men at night. Samuel Shattuck, a dyer in Salem Town, thought she was making poppets because of the small pieces of lace she’d brought to him to dye. Shattuck and his wife also accused Bishop of bewitching their son and causing his declining health. Others claimed that small items went missing when Bishop was around – a spoon, money, a mill brass. After arguments with Bishop, trouble and disaster always seemed to follow.  John Louder, who worked at the Ship Tavern, told of an argument after Bishop’s chickens got into the tavern’s gardens. He claimed to have seen a black pig and black imps in her yard, and even Bishop flying over her orchards afterward. When intimately examined on her trial date of June 2, a witch’s mark was reportedly found on her body. Cotton Mather reported that, on her way to trial, Bishop simply glanced at the Salem Meetinghouse, causing a board to tear from the wall inside and land some distance away.

Perhaps what made her neighbors most uncomfortable about Bishop had been her relationship with her second husband. While married to Thomas Oliver, Bridget gave every sign of being an abused wife. She would appear on the streets with bruises and scratches. However, it was believed that she was equally an abusive wife. The Olivers were known to verbally fight, and in public. Even on the Sabbath! The couple was once charged for that offense, and told to pay a fine or stand in the public square as punishment. Oliver’s daughter Mary paid the fine for her father, but declined payment for her stepmother. And so, Bridget was made to stand in the public square in penance for such behavior. Bridget Bishop was clearly a person who made others uncomfortable.

Bishop was convicted of witchcraft in short order. On June 10, Sheriff George Corwin escorted her from Salem jail, along Prison Lane to Main Street, and finally to “a spot of common pasture at the edge of town.” A crowd gathered. Bridget Bishop was “hanged by the neck until she was dead,” on Proctor’s Ledge at Gallows Hill, the first of 19 people to be so executed. Instead of this first execution bringing people to their senses, it was not the end, but the beginning.

Bridget Bishop was among the last of the innocent victims to be exonerated, by legislation passed in 2001 in Massachusetts.

Additional note: Bridget’s daughter Christian married a man named Thomas Mason. According to historian Marilynne Roach, Christian had died by late 1693, because her husband was remarried to the widow of Thomas Greenslett, who was one of the executed Ann Pudeator’s sons. 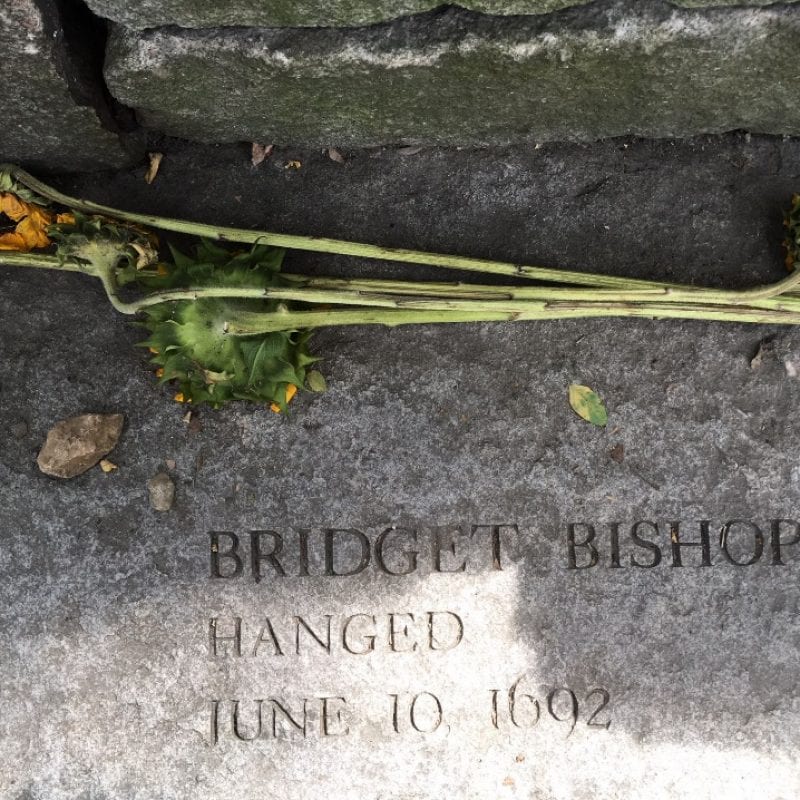