One of the most colorful characters accused of witchcraft in 1692 was Beverly’s Dorcas Hoar.

One of the most fascinating people caught up in the witchcraft delusion of 1692 was Beverly’s Dorcas Hoar, who lived near Reverend John Hale on what is today Hale Street. The Central Cemetery now occupies the site where her house once stood, at approximately 66 Hale Street.

In 1692, when accusations began to spread from Salem Village to surrounding Essex County towns, Dorcas Hoar was a prime target, a “usual suspect.” For many years she had been known to tell fortunes, an activity her minister, Reverend Hale, suggested she abandon. He was under the impression she had given up the practice but he was mistaken.

Years before the witchcraft trials, Dorcas Hoar was the leader of a burglary ring, a group of people that included six of her children and numerous servants in households around town. Among those working with her was 17-year-old Margaret Lord, a live-in servant for the Hales.  According to Edward Brown in his book Thieves, Cow Beaters and other True Tales of Colonial Beverly, Lord “shamelessly stole money, jewelry, clothing and food in abundance from the Hale household, aided and abetted by her friends the Hoars, who were the primary beneficiaries.” Although this thievery initially went unnoticed by Reverend Hale and his wife, the Hale children were aware of what was happening in their home. They remained silent only because Lord threatened to harm them.

Fourteen years before the witchcraft hysteria, in 1678, Hale realized he was being robbed and, after questioning his children, filed a complaint charging Dorcas Hoar and several of her “gang” with robbery. Among those charged were two of Dorcas’s children and Margaret Lord, the latter of whom fled the area and escaped punishment. During the Hale children’s testimony, it was also revealed that the Hoars and Margaret Lord often hosted parties, or “merry bouts,” with singing and dancing. This was not the Puritan way.

Many Beverly neighbors ended up complaining of the burglaries in town, among them the founder of Salem, Roger Conant. He testified that he suspected two Hoar daughters of stealing some canvas from his home a few years before. Others told of the thefts of clothing, money, and oil.

The burglars got away with a very light sentence, only having to pay the costs of what they stole. Historian Edward Brown speculates that Reverend John Hale may have shown them mercy. The Hoar family was not grateful for the leniency. In fact, some of the children beat two of Hale’s cows, one to death, in an act of revenge.

Dorcas Hoar was certainly a perfect candidate for the charge of witchcraft when the accusations began to spread in 1692.

At least five Beverly residents were accused of witchcraft in 1692: Dorcas Hoar, Job Tookey, Susannah Roots, Mary Morey and Sarah Morrell. We know the most about Dorcas Hoar, who was arrested at the end of April and questioned at Ingersoll’s ordinary in Salem Village on May 2. Abigail Williams claimed that Hoar was “the woman that she saw first before ever Tituba Indian or any other.” Other afflicted girls said the Devil could be seen whispering in Dorcas’s ear. Hoar called them all liars but, when convicted in September and scheduled to hang with eight others on the 22nd of the month, she confessed to witchcraft the night before she was to be hanged, and named others as witches. Her last-minute confession saved her life. Reverends John Hale and Nicholas Noyes, along with two schoolmasters, asked for a reprieve of “one month’s time or more to prepare for death and eternity.” Chief Justice William Stoughton granted the stay and, by the time a month had passed, the trials were over.

Hoar remained in jail for eleven months, finally being released in the spring of 1693. She ended her days in poverty, taken care of by public funds paid to a son-in-law with whom she lived.

66 Hale Street, today the main gate of the Central Cemetery, is the approximate location where the Hoar family home stood until it was torn down early in the 20th century.

Behind the main gate of Beverly's Central Cemetery, at 66 Hale Street, is the approximate location of the Hoar home site.

A peek into another cemetery gate on Hale Street.

A late 1890s photograph of the former home of Dorcas Hoar. The house was torn down in the early 20th century. Photo courtesy of Historic Beverly. 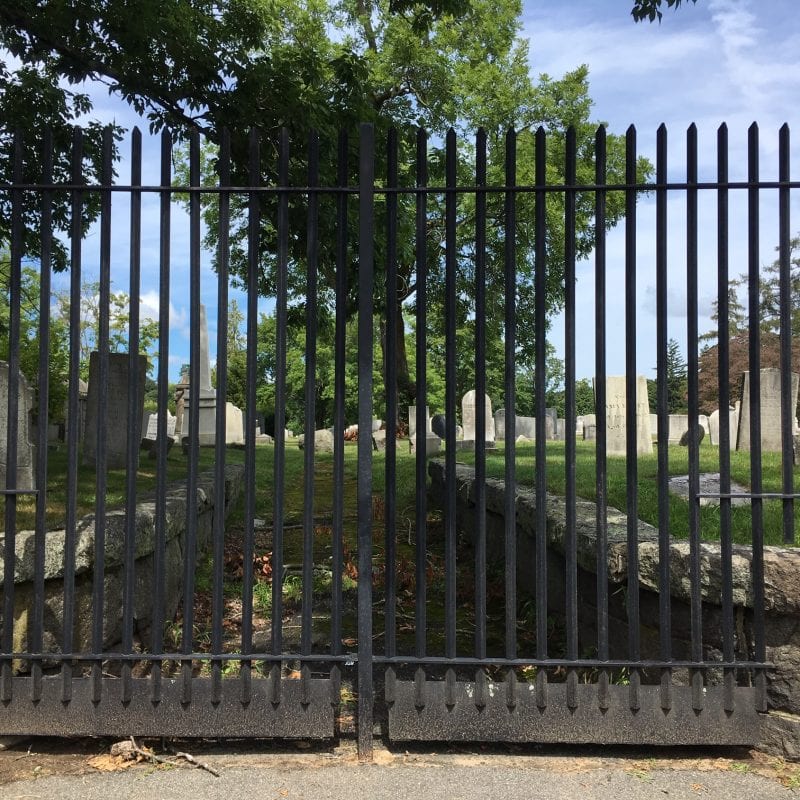