In West Peabody, on the edge of Crystal Lake, stand two memorial stones for Giles and Martha Corey, executed during the Salem Witchcraft Trials of 1692.

At the edge of Crystal Lake on Lowell Street in West Peabody stand two memorial stones honoring Giles and Martha Corey, the only couple executed during the Salem Witchcraft Trials. The area was part of the 150 acres that Giles Corey owned before his death. The memorial was first erected in 1992, and was relocated and re-dedicated in the fall of 2018.

Giles Corey was in his early 70s in 1692 and had married his third wife, Martha (maiden name unknown) only two years before. Some speculate he married Martha so that he would be accepted into the Salem church, as Martha had been a fully communing member of the church since 1690 (after which she transferred to the Village church. Giles, who had a checkered past, was accepted into the First Church of Salem in 1691, despite an incident 17 years earlier when he had beaten Jacob Goodale for stealing apples. Goodale later died of his injuries, but Giles was found “not guilty” of murder and only paid a fine. Martha’s age is unknown, although according to historian Marilynne Roach she was, “Younger than her husband, but not a young woman.” Martha, too, had an interesting past. The records show one child from her first marriage to Henry Rich, but she may also have had a mulatto son from an unknown father.

The first three women to be accused of witchcraft in 1692 were “usual suspects” – a slave, a beggar, and an invalid who had been the subject of gossip for years. The three were arrested on February 29 and examined on March 1 at the meeting house in Salem Village. Giles attended the examination along with a huge crowd of villagers, but not before an altercation with his wife. Martha thought Giles should not attend, and pulled the saddle from his horse to prevent his departure. Nevertheless, he went, against his wife’s wishes. This is the first incident that reveals, perhaps, that the Coreys were an argumentative couple.

The afflicted next turned their attention to an unusual suspect – Martha Corey herself, who always labeled herself “a Gospel woman” since her acceptance into the church. It is unclear what attracted their attention to Martha. She was known in Salem Village. Perhaps gossip spread that she had tried to prevent her husband from attending the examinations. Perhaps Giles’s public complaints about his wife, even if only the grumblings of an old man, had led to the accusations.

Two villagers, Edward Putnam and Ezekiel Cheever, went to the Corey house on March 12 to question Martha about the accusations, but not before stopping at the Thomas Putnam home to ask Ann Putnam Jr. what Martha Corey’s specter was wearing when it came to torment her. Ann said she was blinded by Martha’s specter and could not tell. When the men arrived at the Corey house, Martha was already aware that they would be checking on her attire. How did she know in advance? It was considered very suspicious.

By March 21, Martha Corey was arrested and examined. She maintained her innocence, laughed at the antics of the afflicted, and boldly demanded that she be allowed to deliver an opening prayer. Oddly, she also denied statements that witnesses had heard her make previously. She was held for trial.

Giles Corey was questioned and made some statements that have led many historians to accuse him of turning his wife in for witchcraft. He told of odd occurrences at their home involving unexplained sicknesses of an ox and a cat, both of whom recovered as quickly as they became ill. He said Martha criticized the way he prayed, and he had been heard to say he knew things that would “fix her business.” Yet, he defended her when an ointment was found in their home (possible evidence of folk magic), saying Martha made it with instructions from leading Salem citizen Bartholomew Gedney (later to be a court judge). He changed his story when questioned later. He also accompanied Martha as she was transported to Boston jail, turning back only when they reached the ferry, as, he explained, “I had not money” for the fare.

Perhaps they were simply an old, bickering couple.

As April began, the specters of both Martha and Giles were seen tormenting people. By the 18th, an official complaint was filed against Giles and he was arrested for questioning. His plan for the examination appears to have been to deny everything. He claimed not to have said anything against his wife. He denied making statements others clearly heard him make. He pled “not guilty” to the charges of witchcraft, but was held for trial.

In order for a trial to move forward in the seventeenth century, one was expected to answer the question “How will you be tried?” with the answer “By God and my country.” The trials of both Coreys were scheduled for September, but Giles had seen enough of the court proceedings and did not trust that he would receive a fair trial. He stood mute, refusing to speak.

Martha Corey was indicted and condemned to death in early September. On the 11th, she was excommunicated from her church.

The court decided to use an old legal procedure called peine forte et dure, French for hard and forceful punishment, to deal with the mute Giles Corey. This form of torture involved a suspect being placed on the ground, with more and more stones placed upon the chest, to force the victim to speak.

Despite two days during which his friend Thomas Gardner tried to convince him to let the trial move forward, Giles did not relent.

The night before his torture was to take place, Thomas Putnam wrote a letter to Judge Samuel Sewall and revealed that his daughter Ann had been visited by the ghost of Jacob Goodale, the long-ago victim of Corey’s beating. Reminding Sewall of that case, and claiming that, “it cost [Corey] a great deal of money to get off,” Putnam was underscoring his conviction that Corey‘s treatment was justified.

Giles Corey was excommunicated from his church on September 18. The next day, he was taken from jail, laid down in a field near the prison, and stones were piled on him. In a few hours he was dead, saying only two words, according to legend: “More weight.” It is believed two of his sons-in-law may have collected his body from the prison and buried it near the crossroads at Tapley’s Brook. According to John Mills in The Peabody Story, “His body was denied a Christian burial, and was deposited at the crotch of the roads, near Tapley’s Brook, as done with the bodies of infamous wrongdoers. The only Tapley’s Brook near Salem was located in South Peabody, and crossed under Washington Street near the junction of Lynn and Lynnfield Streets, all in existence at the time of the witchcraft delusion. This area of Peabody had been known as the “Butts” since the early settlements, and it is possible that the remains of Giles Corey were buried in that area.”

Martha Corey was executed with seven others on September 22, hanged on Proctor’s Ledge at Gallows Hill. It is unknown what happened to her remains. This was the last execution day of the Salem Witchcraft Trials. The Court of Oyer and Terminer was dissolved in October, and those convicted of witchcraft by a new court the following year were granted reprieves by Governor William Phips.

Both Giles and Martha Corey had their names cleared of witchcraft accusations by a 1711 Reversal of Attainder granted by the Massachusetts legislature.

The pressing of Giles Corey

Crystal Lake, part of the Corey property in 1692

The intersection of Washington, Lynn, & Lynnfield Streets, an area also called "Butts" by early settlers. Was Giles once buried here?

Another view of the intersection of Washington, Lynn, and Lynnfield Streets. Tapley Brook runs under Washington Street at this location. 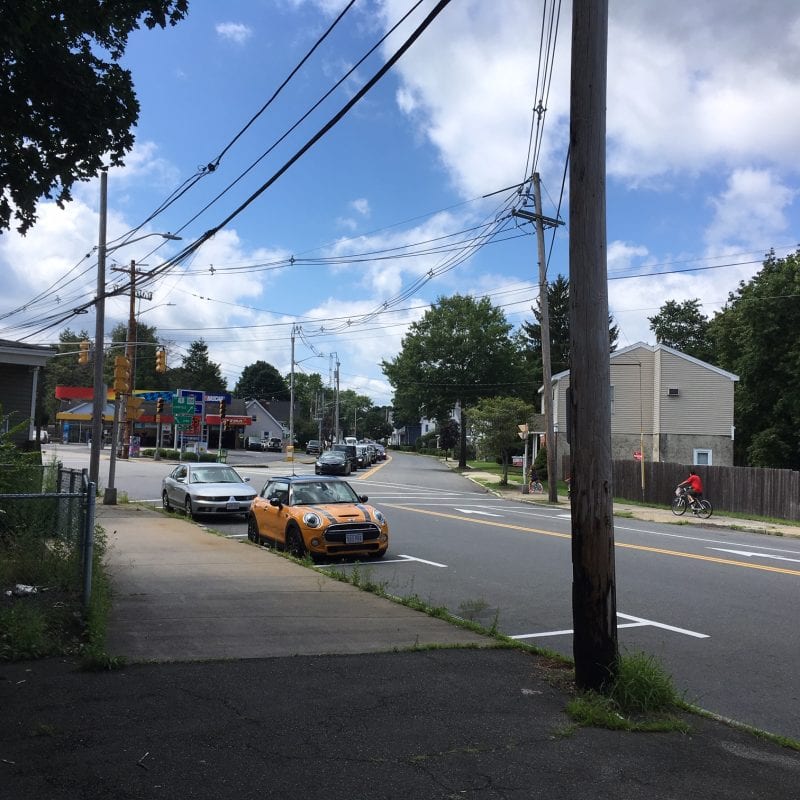