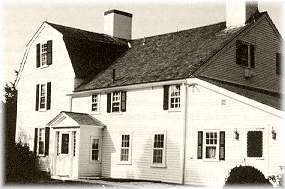 431 Maple Street, located on the southeast portion of the cloverleaf intersection of Route 1 and Route 62.

Joseph Putnam, youngest brother of the persecuting Thomas, lived in this house in 1692. Unlike most of the Putnam family, Joseph was an early and outspoken opponent of the witch hunt. When the examinations began, he reportedly stormed over to Thomas Putnam’s house and confronted Ann Putnam Sr. “If you dare to touch with your foul lies anyone belonging to my household,” he told her, “you shall answer for it.” For months Joseph kept horses saddled at all times and armed his family to guarantee their escape in case they were ever accused. They never were. In 1718, Joseph’s son Israel was born in this house. Israel became one of the most colorful generals of the American Revolution. As of 2020, the Putnam house is owned by the Putnam family.

Lieutenant Thomas Putnam (father of Sergeant Thomas Putnam Jr., principle accuser during the witchcraft trials), built a home here in 1648, on farmland that then consisted of 100 acres. In 1692, his youngest son, Joseph Putnam, lived here with his wife Elizabeth, who was the daughter of wealthy Salem Village leader Israel Porter. Joseph was the only child of Lieutenant Putnam’s second marriage, to Mary (née Veren), which made him the half-brother of Thomas Putnam Jr. According to the Danvers Historical Society, twelve generations of the Putnam family called this home.

Joseph Putnam was one of two people (the other was his neighbor Ezekiel Cheever) who took notes during the March 1 examinations of the first three to be accused of witchcraft in 1692 – Sarah Good, Sarah Osborne, and Tituba. From that point forward, he was one of the most outspoken opponents of the proceedings, which put him in direct conflict with most of the Putnam family, especially that of his half-brother Thomas. He was quoted saying to his sister-in-law Ann Putnam, “If you dare to touch with your foul lies anyone belonging to my household, you shall answer for it.” It was reported that Joseph kept horses saddled at all times, ready to escape if accusations were directed at him. He was never accused.

In the factions that developed in Salem Village before the witchcraft hysteria began, much of which was focused on their new (as of 1689) church leader, Reverend Samuel Parris, the Putnams supported the minister. Joseph was one of the few who did not. He was a member of the new “anti-Parris” village committee elected on October 16, 1691, along with Joseph Hutchinson, Joseph Porter, Daniel Andrews, and Francis Nurse. Parris thought of these committee men as his enemies, recording his feelings in his church record book.

According to Paul Boyer and Stephen Nissenbaum’s book Salem Possessed, the Putnam family tended to make their political feelings well-known, while the Porters “were behind-the-scenes men.” Israel Porter, especially, wielded his influence quietly. As the witchcraft hysteria grew, the Putnams were among the strongest accusers, while the Porters were skeptical and spoke out against the proceedings. In another example of how lines were drawn between family members, Israel Porter was married to Elizabeth, sister of witchcraft trials magistrate John Hathorne.

Joseph Putnam sided with the Porter faction. He was one of the thirty-nine signers of the petition in support of Rebecca Nurse. Sadly, their effort was futile. Nurse was hanged on July 19.

Even after the trials were over, Joseph Putnam remained relentless in his dogged pursuit of Reverend Parris. He, and others, wanted the minister to admit his role in the deaths of innocent victims. They did not rest until Parris finally left the village for good in 1697. Among his efforts, as constable in 1696, Joseph Putnam refused to collect the taxes intended to pay the minister’s salary.

There is a complicated back story to the Putnam family relationships, with ill-will and jealousy developing over the years. Lieutenant Thomas Putnam died in 1686. He left to his second wife Mary and their only child, the then 16-year-old Joseph, the prime parts of his homestead. The sons from his first marriage (including Sergeant Thomas Putnam and Deacon Edward Putnam) felt slighted, even though they had already received farmland from their father. They tried to break the will but failed. When Joseph was 18, he became one of the richest men in Salem Village. He had strong ties to Salem Town through his mother (Mary Veren was the widow of a wealthy Salem mariner) and then at 20, he married into the wealthiest family in Salem Village, taking the 16-year-old Elizabeth Porter as his wife. She was the daughter of Israel Porter and the granddaughter of William Hathorne, the patriarch of the Hathorne family. The Porters, too, had strong ties with Salem Town. Joseph joined the new anti-Parris committee at the age of 22. His wealth and power grew. When his mother died in 1695, she left everything to Joseph, making him even more wealthy. At the same time, his half-brothers were finding their prospects diminished, as they had to carve out smaller and smaller pieces of property for their own children and had less connection and power in Salem Town.

Joseph Putnam was one of just a few who stood against the mass hysteria and fanatical belief in the Devil’s arrival in Salem Village. According to Charles Upham in his book Salem Witchcraft, Joseph Putnam showed “a degree of courage, spirit, and resolution, which cannot but be held in honor.”

Additional note: Paul Boyer and Stephen Nissenbaum explain in Salem Possessed that the name Joseph was often reserved in the 17th century for the first son born after a lapse of years, or the first son born to a second marriage. They suggest this was true of Joseph, the first and only child of Lieutenant Thomas Putnam Sr. and his second wife Mary Veren. The name originates from Joseph in the Bible, a child of the elderly Jacob and the first with his wife Rachel.

Additional note: One of Joseph and Elizabeth’s children was Israel Putnam. Born in this house in 1718, he was one of the most colorful generals of the American Revolution, commanding the troops at the Battle of Bunker Hill. He may have told William Prescott to give the command “Don’t fire until you see the whites of their eyes,” during the battle, although several officers are credited with the line. The house was given by the Putnam family to the Danvers Historical Society in 1991, but as of 2020 the Putnam family once again owns the property. There are plans to renovate the house, which is on the National Register of Historic Places.