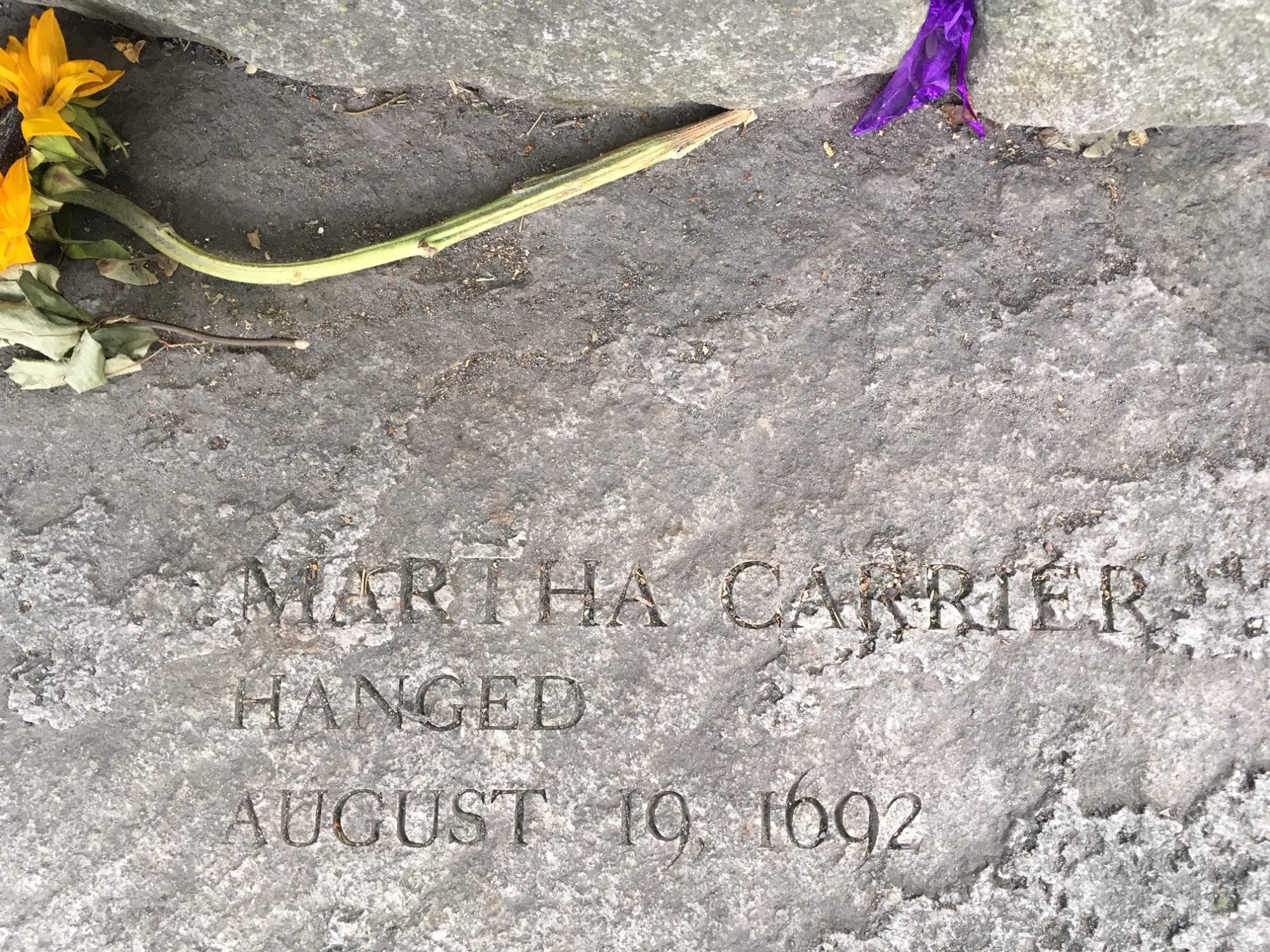 The Widow Allen’s farm was “at Sunset Rock, on the hill,” according to Charlotte Helen Abbott’s Early Records of the Allen Families of Andover, available at the Memorial Hall Library. This is thought to be where Martha and Thomas Carrier and their children were living in 1692. Martha Carrier was the first person to be accused of witchcraft in Andover.

The first person to be accused of witchcraft in Andover in 1692 was Martha Carrier. She was born in Andover circa 1653, one of six children born to two of the original founders of Andover, Andrew and Faith (Ingalls) Allen. Prior to her marriage, Martha lived with her sister Mary and Mary’s husband Roger Toothaker in the nearby town of Billerica, where Martha met Thomas Carrier, a 7’4” Welshman twenty years her senior. They married in 1674, and Martha had her first child two months later. In 1676, the Carriers were asked to leave Billerica. The reasons the family was unwelcome are unclear. Was there financial trouble? Was the rumor true that Thomas Carrier (aka Thomas Morgan as shown on his marriage license) was one of the “headsmen” who executed Charles I of England before arriving in New England? Did gossip about the couple’s premarital relations make them outcasts? Was Martha’s aggressive behavior with neighbors a contributing factor? It is impossible to know. Between 1684 and 1689 they moved to Andover and lived with Martha’s parents, Andrew and Faith Allen.

In colonial times, smallpox, a serious and infectious disease, regularly swept through communities. In 1690 a smallpox outbreak began in the Carrier family, where there were now five children, but miraculously, none of the Carriers died. However, seven members of Martha’s family, including her father, both of her brothers, two nephews, one sister-in-law and one brother-in-law, as well as six other people from Andover, died from the disease. From that point, the Carriers were looked at with suspicion, believed to be the cause of the epidemic.

Martha was an outspoken woman, frequently arguing with her neighbors, some of whom said they became ill or that their livestock suffered after these encounters. Benjamin Abbot and his wife Sarah later testified that they had been granted a parcel of land near the Carriers in 1691 but when it came time to lay out the boundary, Carrier had argued with them over the property line. She cursed Benjamin, he said, after which he became ill with sores and swelling feet and several of the Abbot’s cattle died.

Martha was also suspected of witchcraft because her brother-in-law, folk-healer Roger Toothaker, was known to use counter-magic. Toothaker, by 1692 living in Salem Town, apart from his family in Billerica, was called out by the afflicted girls of Salem Village who had heard that he knew how to kill a witch with folk-magic. Toothaker was arrested on May 18 and held in Boston jail (where he died on June 16). He may have been the person who first attracted attention to the Carrier family.

In mid-May, Martha Carrier’s Andover neighbor, eleven-year-old Phebe Chandler (daughter of William Chandler who owned an inn nearby), said she encountered Carrier’s threatening specter in the meeting house, and heard Carrier’s disembodied voice while running an errand for her mother. After these events, Phebe became ill.

By May 31, Martha Carrier was the first to be arrested in Andover, brought to Salem Village for examination by south end constable John Ballard. She professed her innocence but the afflicted girls reacted violently in her presence and said they could see the Devil with her. Susanna Sheldon, Elizabeth Hubbard, and Ann Putnam Jr. accused her of murder, while Mary Walcott claimed to see thirteen ghosts, reminding everyone of the thirteen Andover residents who had died of smallpox in 1690. When asked by Judge Hathorne what black man (meaning the Devil) she saw, Carrier responded, “I saw no black man but your own presence.” Said Carrier to the magistrates, “It is a shameful thing that you should mind these folks that are out of their wits.”

Another accused in Andover, eighteen-year-old Mary Lacy Jr., claimed Carrier attended witch meetings and was promised the title “Queen in Hell” by the Devil, a name that was repeated by Reverend Cotton Mather in his account of the witchcraft trials The Wonders of the Invisible World. Lacy’s grandmother Ann Foster, also accused in Andover, said she had ridden to a witch meeting with Carrier and, when the stick they were riding broke, was forced to cling to Carrier’s neck.

Even Carrier’s own nephew, Allen Toothaker, testified against her, saying she had bewitched him after he’d had an altercation with her son Richard. Toothaker claimed a wound received in the native wars only began to heal after his aunt was jailed. Could he have resented the Carriers now living in the ancestral home in Andover? Perhaps he’d hoped to inherit it himself?

In late July, as the witchcraft accusations in Andover swelled, Martha’s two eldest sons, Richard and Andrew, were arrested and brought to Salem. Initially claiming innocence of witchcraft, they were tortured into confessing (fellow prisoner John Proctor said they were “tied neck and heels till the blood was ready to come out of their noses”). They were soon joined in jail by ten-year-old Thomas and seven-year-old Sarah, who also confessed. Sarah testified that she had been a witch since she was six and that her mother “made me set my hand to a book.” Her baptism, she said, was in “Andrew Foster’s pasture.” Brother Thomas claimed to have been baptized in the Shawsheen River. One can only imagine the level of fear Martha’s young children experienced that would convince them to testify against her.

A tremendous amount of testimony was brought against Martha Carrier at her trial on August 2, with many agreeing that Goody Carrier was offered the role of “Queen in Hell” by the Devil himself. Although she claimed her innocence to the end (she was the only family member who did not confess), Carrier was hanged, along with Reverend George Burroughs, George Jacobs Sr., John Proctor, and John Willard on August 19, 1692, on Proctor’s Ledge at Gallows Hill. It is not known where her remains lie. Her children were eventually released from jail, although their guilt about testifying against their mother must have remained with them for life.

Thomas Carrier petitioned for restitution on behalf of his executed wife and for the expenses incurred during his children’s incarceration. On October 17, 1711, Martha Carrier’s name was cleared of all charges, nearly twenty years after her death. By that time, the Carrier family had moved to Colchester, CT where they were among the earliest settlers of the area. Thomas operated iron works on the Salmon River. He died in 1735 at the reported age of 109. (The gravestone that stands in the Marlboro Cemetery in Connecticut, memorializing Thomas and several of his children and grandchildren, erroneously lists his death year as 1739. This stone, and three other Carrier family stones beside it, were reportedly moved to this cemetery from a family plot at the Carrier homestead in Colchester.) The New England Journal dated June 9, 1735 said, “His head in his last years was not bald nor hair gray. Not many days before his death he traveled on foot six miles to see a sick friend, and the day before he died he was visiting his neighbors. His mind was alert until he died, when he fell asleep in his chair and never woke up.”

In 1999, Billerica’s Board of Selectmen unanimously voted to rescind the 1676 banishment of the Carrier family.

Additional note: In his book In the Shadow of Salem: The Andover Witch Hunt of 1692, author Richard Hite details the marriages of the Carrier children after the trials. The oldest, Richard, married Elizabeth Sessions of Andover in 1694. Thomas Carrier moved with his children to Colchester, CT. Says Hite, “Sarah Carrier, arrested at the age of seven, married a man named John Chapman. She did not die until 1772 (aged eighty-eight), almost certainly the last survivor of those accused of witchcraft in 1692.”

According to the Abbott family genealogies at Memorial Hall Library, “The old home (Allen) was at Sunset Rock, on the hill.” The Plan of Andover in the Province of Massachusetts Bay, Essex County, 1692, created by the Andover and North Andover Historical Societies in 1992, places the Widow Allen’s home on the east side of the “Way to Boston,” with Sunset Rock to the north, Ladle Plain to the east, and on the opposite side of the street from nearby neighbors William Chandler’s Inn to the south and Joseph Ballard to the north. This puts the approximate location near the intersection of Porter Road and Spring Grove Road. However, recent deed research by an Andover historian suggests Chandler’s Inn was farther south on Woburn Street. Perhaps the Allen Farm was also farther south, near Doric Way? Another supporting argument for this alternate location is that Martha’s son Thomas confessed to being baptized in the Shawsheen River, and her daughter Sarah confessed to being baptized in Andrew Foster’s pasture. Both of these are closer to this more southern site, than to the hilly location farther north.

The intersection of Porter Road and Spring Grove Road, the approximate area of the Allen farm where the Carriers were living in 1692.

Could the Allen Farm have been near Doric Way, farther south than the "Plan of Andover" suggests?

The site of the Toothaker property in Billerica, where Martha Allen lived before her marriage to Thomas Carrier.

Carrier family gravestones in the Marlboro, CT cemetery. The stones were moved from the Carrier family plot in nearby Colchester, CT.

A memorial stone for Thomas Carrier and his descendants, in the Marlboro CT Cemetery.

At the top, the stone reads, The First Settlers of Colchester. Thomas Carrier's death date is incorrect. 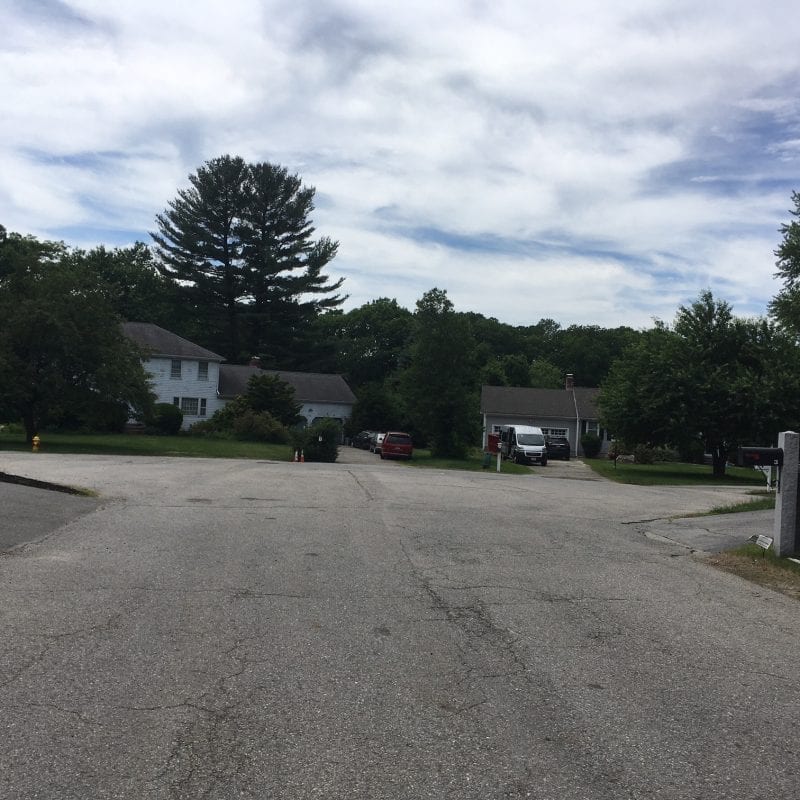 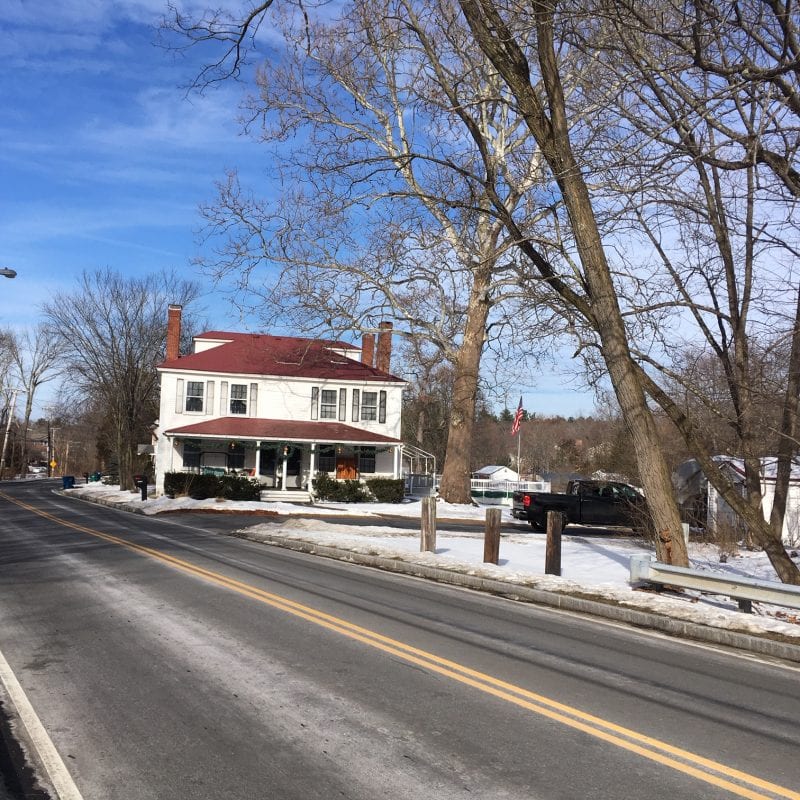 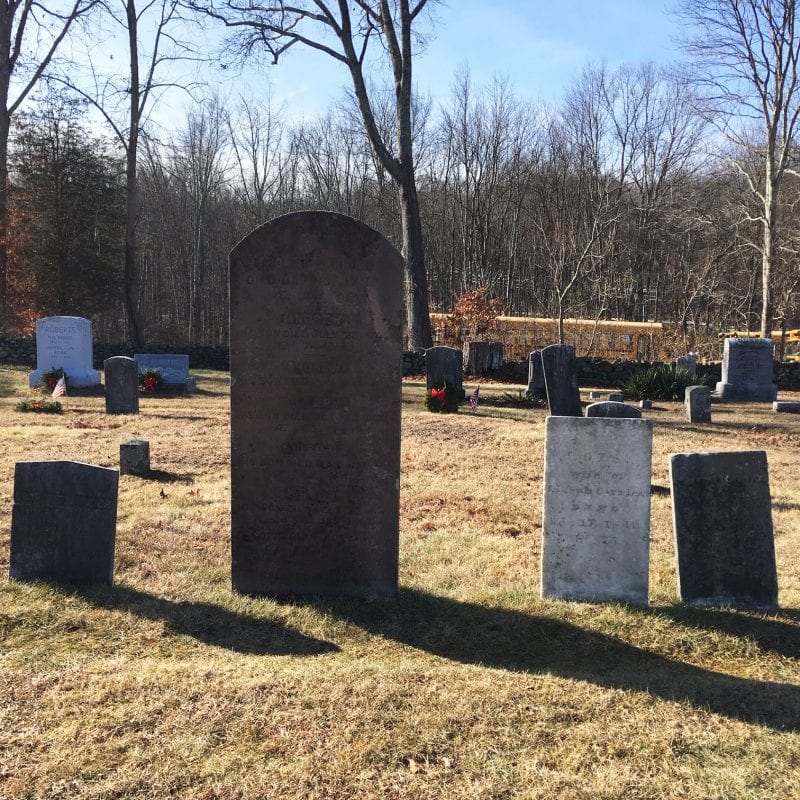 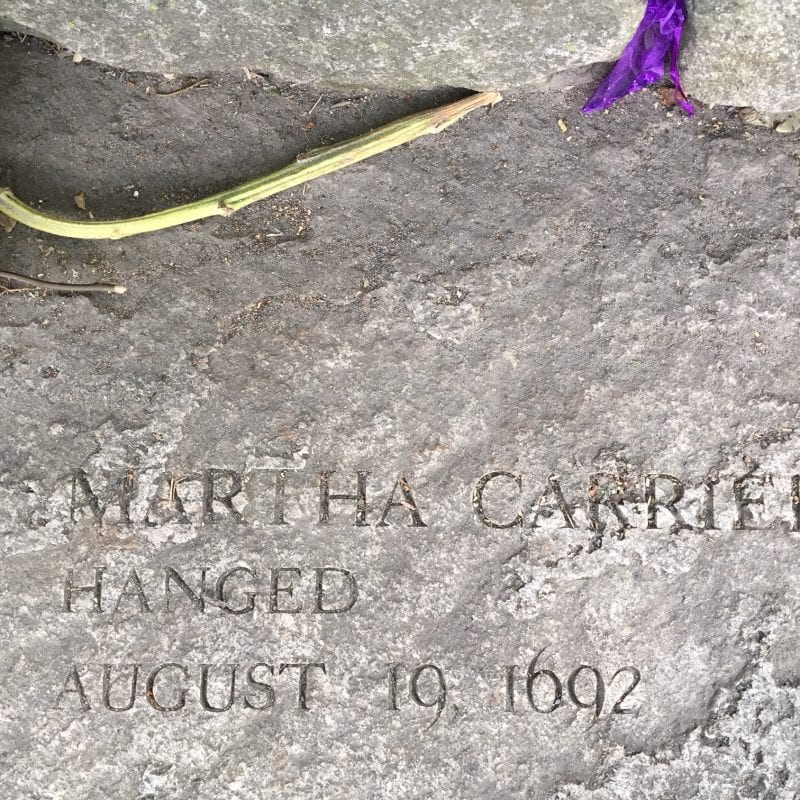