Thirty-year-old Nehemiah Abbott Jr. of Ipswich was the only person to be accused of witchcraft in 1692, but set free after his examination when the afflicted could not confirm his identity.

Nehemiah Abbott Jr. is one of the most fascinating figures from the Salem witch trials of 1692. He was, it seems, the only person cried out on by afflicted witnesses during the Salem hysteria who, when brought into court for his examination, was NOT confirmed as a witch by his accusers. While there were a few accusations of some wealthy and powerful people that never gained traction – Reverends Samuel Willard and Francis Dane, for example, or the wives of Reverend John Hale and Governor Williams Phips  – Nehemiah appears to be the only person of moderate means who was released permanently after being taken into custody and examined, with no charges filed.

According to the Historic Ipswich website, this area on Newbury Road was first settled by Nehemiah Abbott Sr., “a deacon of the Topsfield Church who married James Howe Sr.’s daughter Mary in 1659 and farmed this part of his father-in-law’s land. By the late 18th century, the Perley family owned and farmed the site.” An M.V.B. Perley illustration of this corner of Ipswich, known in the seventeenth century as Ipswich Farms, shows land marked “Abbott” in between land marked “Perley” to the southwest and “Howe” to the northeast. Interestingly, James How Jr., Mary’s brother, had married Elizabeth Jackson of Rowley in 1658 and lived around the corner from Newbury Road on what is today Linebook Road. Elizabeth How was accused of witchcraft in 1692 and was one of five women executed on July 19. Her principal accusers were other nearby neighbors, Samuel and Ruth Perley, who accused Elizabeth of causing the illness and eventual death of their daughter Hannah in 1685. Abbott Sr. was one of the people who gave testimony against Elizabeth How that contributed to her conviction; he claimed sickness and death of livestock after altercations with her.

Nehemiah Abbott Jr., born circa 1662, was about 30 years old when he was accused of witchcraft. He had been married to Rebecca Fiske since 1685 and also lived in Ipswich Farms (today known as Linebrook Parish) – perhaps on or near the same land as his father. According to a 1906 book by Abbott descendant Lemuel Abijah Abbott, “the estate had largely been given to son Nehemiah before his father’s death [in 1707] …”

On April 21, Nehemiah Abbott Jr., described as a weaver, was among several people for whom arrest warrants were issued. Also arrested that day were William and Deliverance Hobbs, Mary Easty, and Sarah Wildes – all of Topsfield; Edward and Mary Bishop, and Nathaniel Putnam’s slave Mary Black, of Salem Village; and the wealthy Mary English, of Salem Town.

Thanks to examination notes taken by Reverend Samuel Parris, what transpired during Abbott’s questioning is well-documented. Despite accusations of spectral torment by Mary Walcott and Ann Putnam Jr., Abbott insisted on his innocence, saying, “I speak before God that I am clear from this accusation.” After being cautioned by the magistrates to be sure they had the right man, the accusers started to have doubts. Says Charles Upham in his 1867 work Salem Witchcraft, “Mary Walcott began to waver in her confidence, and Mercy Lewis said, ‘It is not the man.’” This uncertainty was unprecedented – accused women and men before this also claimed to be innocent but their accusers were unmoved. The proceedings came to a standstill.

Nehemiah was removed from the court room while others were questioned. When Abbott returned, there were so many people blocking the windows, and thus the light, that he was brought outside so his accusers could have a better look. According to Parris, “…he was ordered to go abroad, and the accusers to go forth to him, and view him in the light, which they did in the presence of the magistrates and many others, discoursed quietly with him, one and all acquitting him; but they said he was like that man…”

Why the afflicted witnesses backed off their accusations remains a mystery. They never were known to admit to mistaken identity before and never did so again. Nehemiah is described as being a “hilly-faced man, and stood shaded by reason of his own hair,” perhaps meaning pock-marked and unkempt. The three accusers also claimed that the specter they had seen had a “wen,” a cyst or growth, by his eyes – and when they studied Abbott closely, they saw he did not. Was his release based on such a simple explanation?

6 Newbury Road. Private Residence. Not Open to the Public. Seen here is the Joseph B. Perley House, built in 1865, which stands on property once farmed by the Abbotts.

brook near the Abbott property 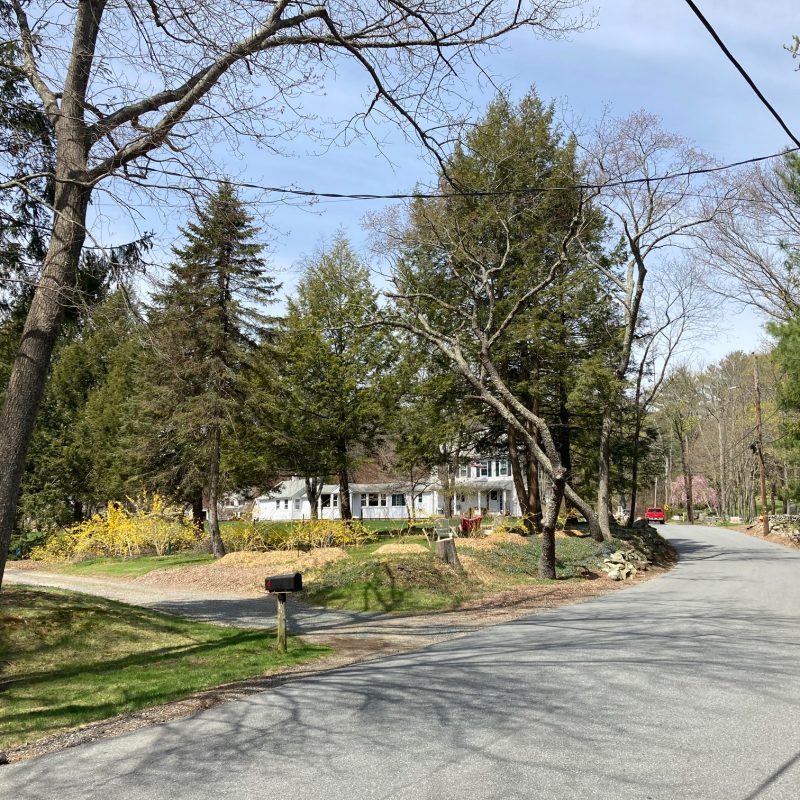 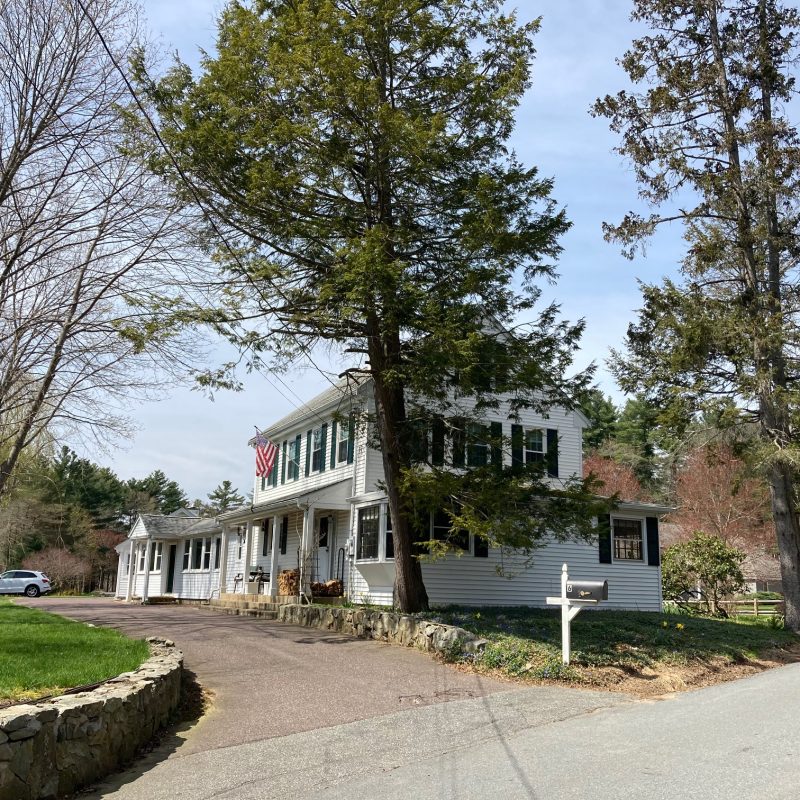 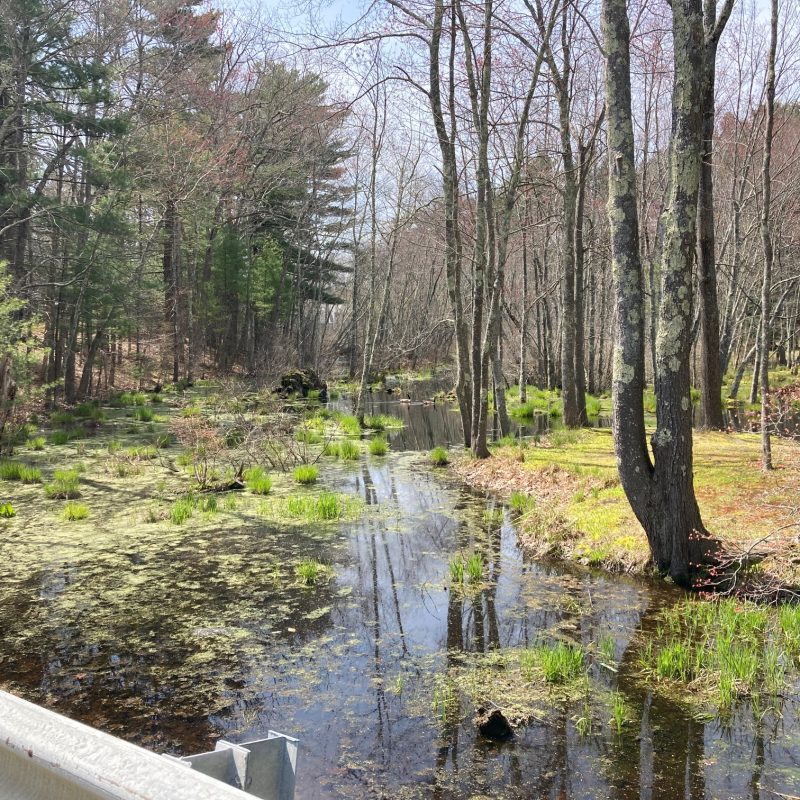