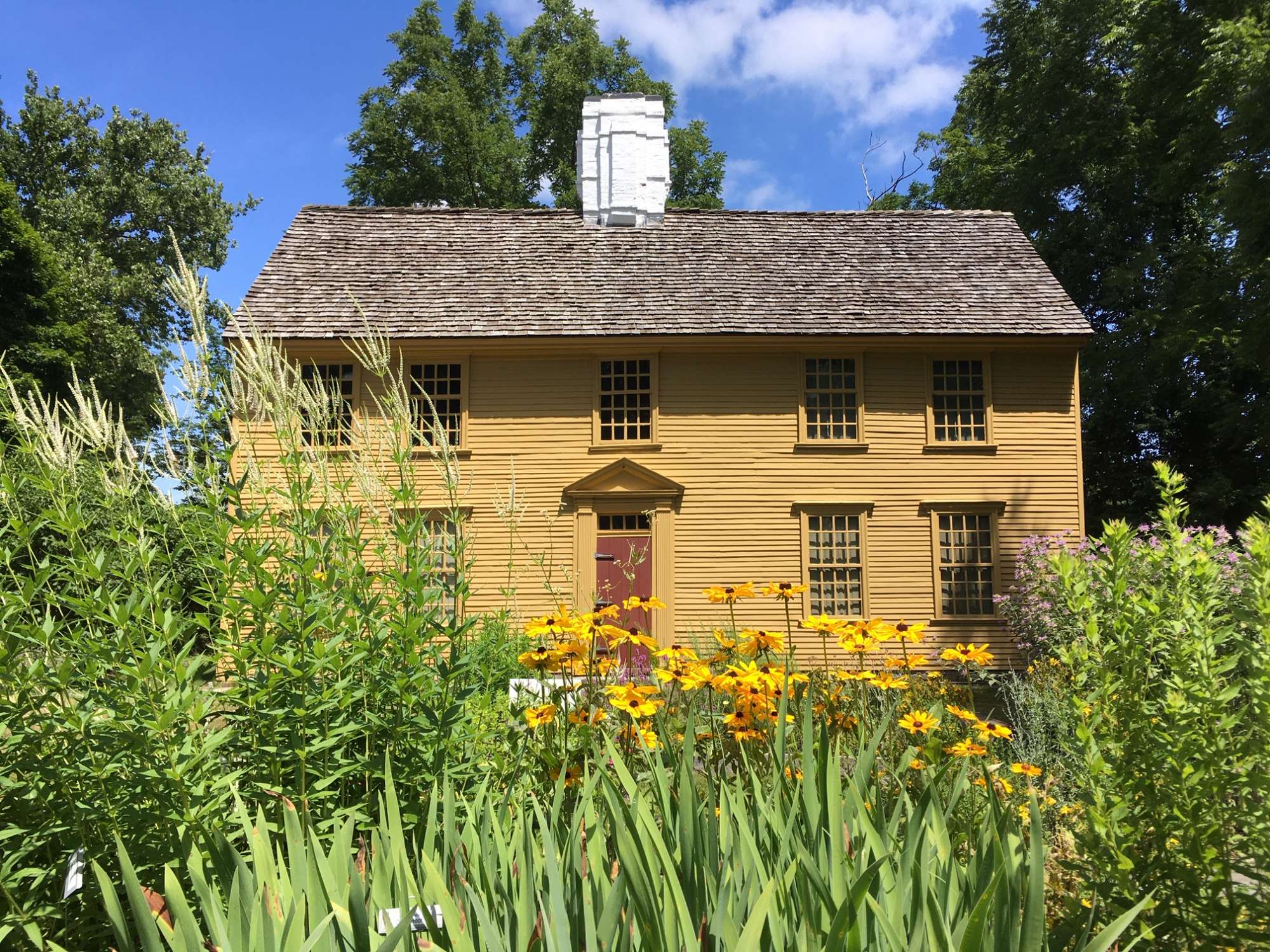 This icon of North Andover, the home of Reverend Thomas Barnard, was built circa 1715. Since 1950, it has been owned and maintained by the North Andover Historical Society.

There were two ministers in Andover in 1692. Reverend Francis Dane, Andover’s minister since 1649, was 76 years old. In 1682, as Dane became less able to fulfill all of his ministerial duties, Reverend Thomas Barnard was hired and became the junior minister. He was 35 in 1692. It is likely Barnard (and others) thought Dane would retire as his activities decreased, but Dane did not retire. In 1692, both ministers were collecting a salary – £30 a year for Dane and £50 a year for Barnard. Although the records don’t reveal that there was any conflict over the matter, it is imaginable that some of the parishioners preferred one minister to the other. However, there are no records that confirm Andover experienced factionalism akin to Salem Village over ministerial support.

What was different about Dane and Barnard were their family connections. Dane had close family ties in both the North and South Ends of town, while Barnard, who was born in Connecticut and raised in western Massachusetts, did not. This, along with their generational experience, might explain their different reactions to the witch hunt that developed in Andover in the spring of 1692.

Reverend Dane, who had defended a resident of Andover against witchcraft charges decades earlier, was against the growing hysteria and made efforts to maintain calm. Did this make him a target? By the time the trials were over, twenty-eight members of Dane’s immediate and extended family were accused of witchcraft, according to Emerson Baker in his book A Storm of Witchcraft: The Salem Trials and the American Experience.

Reverend Barnard, on the other hand, saw the situation differently. He had attended Harvard (at the same time Cotton Mather attended) and initially believed the accusations against his neighbors in Andover. Maybe the Barnard-Mather generation was more likely to believe the charges.

Barnard was present at the “touch test” that took place at the meeting house in the North End. It was believed in 1692 that an afflicted person would be “cured” if she or he touched a “witch.” The evil, it was thought, would flow back into its source. The touch test had been used in Salem examinations since May, but on September 7, all of the Andover afflicted and accused were called to gather at the meeting house. The afflicted were blindfolded and were led to the accused “witches.” If their afflictions ceased after touching one of the accused it was believed they had identified a witch. By the time the touch test was over, all of the accused women and men, at least seventeen people, had been confirmed as witches. Andover’s justice of the peace, Dudley Bradstreet, issued the warrant that led to their arrests and transport to Salem for examination and imprisonment. Several accused were encouraged to confess to witchcraft by their family members – by this time it was thought it was the only way to avoid execution.

While Reverend Barnard is known to have “been at prayer” before the touch test began, according to a later account by six of the accused, that does not mean he was the one who orchestrated the event, according to author Richard Hite in his book In the Shadow of Salem: The Andover Witch Hunt of 1692. Hite suggests it was more likely the town selectmen who brought the gathering together, perhaps after pressure from Salem’s Court of Oyer and Terminer.

As the hysteria started to wind down in the fall of 1692, both Reverend Dane and Reverend Barnard signed a petition, sent to Governor William Phips, in support of the Andover accused. In early October, Cotton Mather’s father, Increase Mather, argued against the use of the touch test as proof of witchcraft. It was no longer used as admissible evidence in the trials that moved forward in early 1693.

Thomas Barnard was born in 1657 in Hartford, Connecticut and was raised in Hadley, Massachusetts, in the western part of the state. He attended Harvard in the 1670s, with Cotton Mather as a classmate. In 1682, he became the junior minister in Andover, and the sole minister in 1697 when Francis Dane passed away. When Andover’s South Parish was officially founded in 1711, Barnard remained minister of the North Parish. Barnard was married three times: to Elizabeth Price in 1686, to Abigail Bull in 1696, and to Lydia Goffe in 1704. Barnard remained the minister of the North Parish until his death in 1718. He is buried in the First Burial Ground. Thomas’s second son, Reverend John Barnard, succeeded Thomas as minister of the North Parish. He also lived in the Parson Barnard House and is buried in the First Burial Ground.

Upon Reverend Thomas Barnard’s death, Reverend Samuel Phillips of the South Parish said, “I have always esteemed it a favor of Providence that my lot was cast in the same town with that holy man of God, who was pleased to express the kindness of a father to me, and where I had for some years the advantage of his guidance and example. He was really one of the best of ministers, had the tongue of the learned, was a sound and eminent divine, delivered excellent sermons, and had the spirit as well as the gift of prayer, was gentle as a father, yet maintaining government and discipline in the church, very obliging towards all men, and always studied the things that make for peace…”

The house that stands today at 179 Osgood Street was built circa 1715, replacing the church-owned parsonage which burned down in 1708. It has been owned and maintained by the North Andover Historical Society since 1950. It was originally thought to be the home of Anne and Simon Bradstreet.

179 Osgood Street. Four front rooms are open to the public on the first Saturday of June-October. For further information, please contact: 978-686-4035 or visit: northandoverhistoricalsociety.org

Visible in the distance is the oldest house in North Andover, the Bridges House, moved to Court Street from its original location on Marbleridge Road.

The grave of Reverend Thomas Barnard, in the First Burial Ground.

The grave of Reverend John Barnard, in the First Burial Ground. 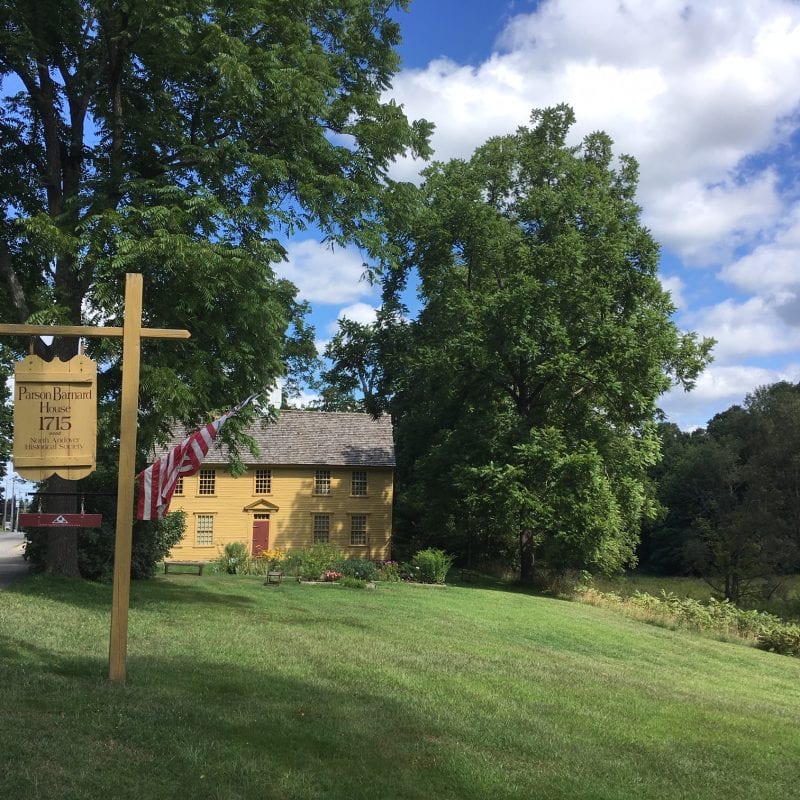 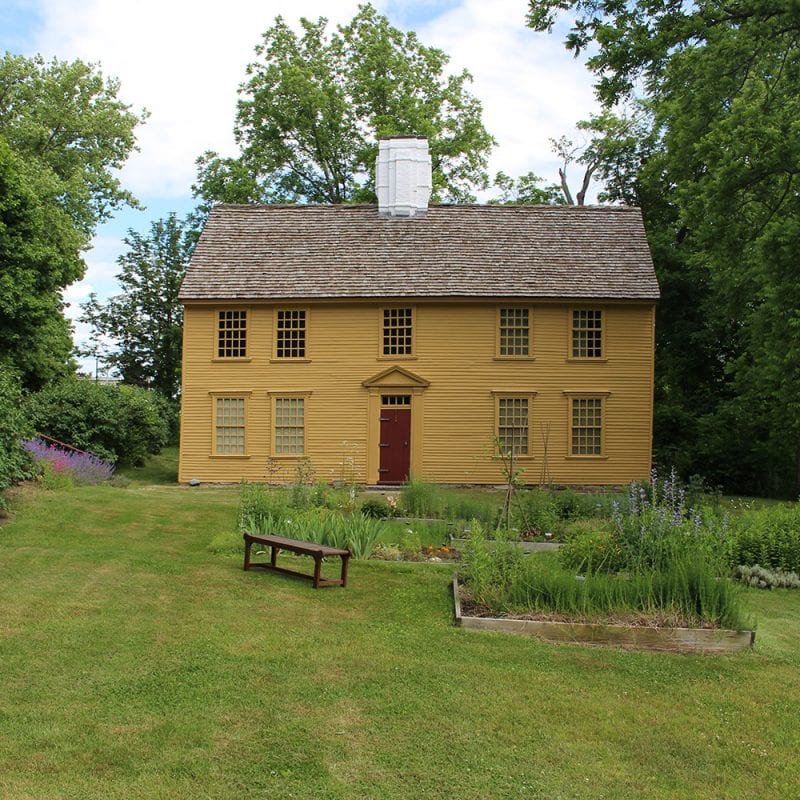 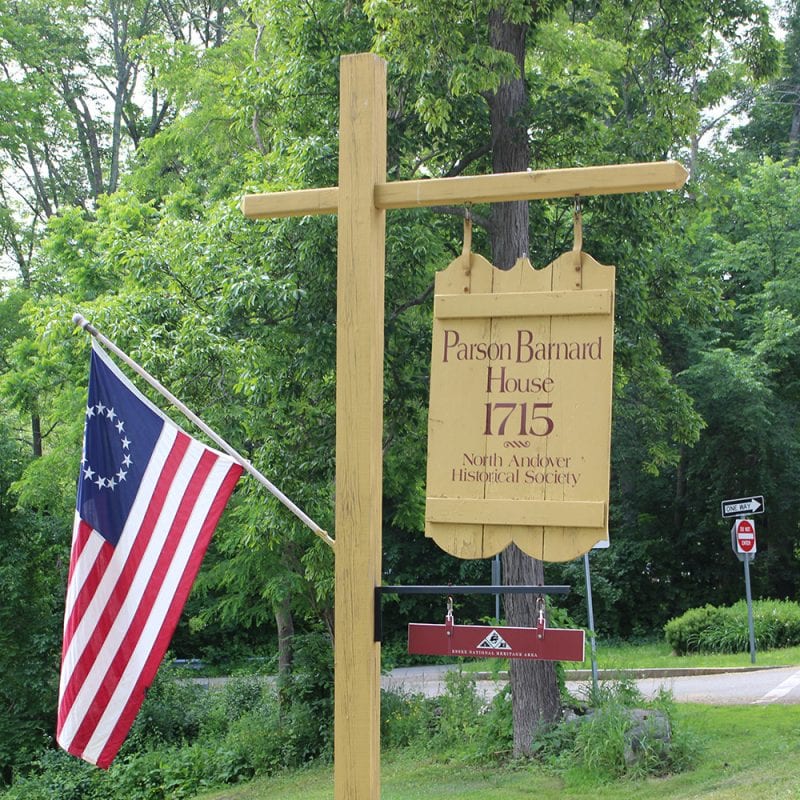 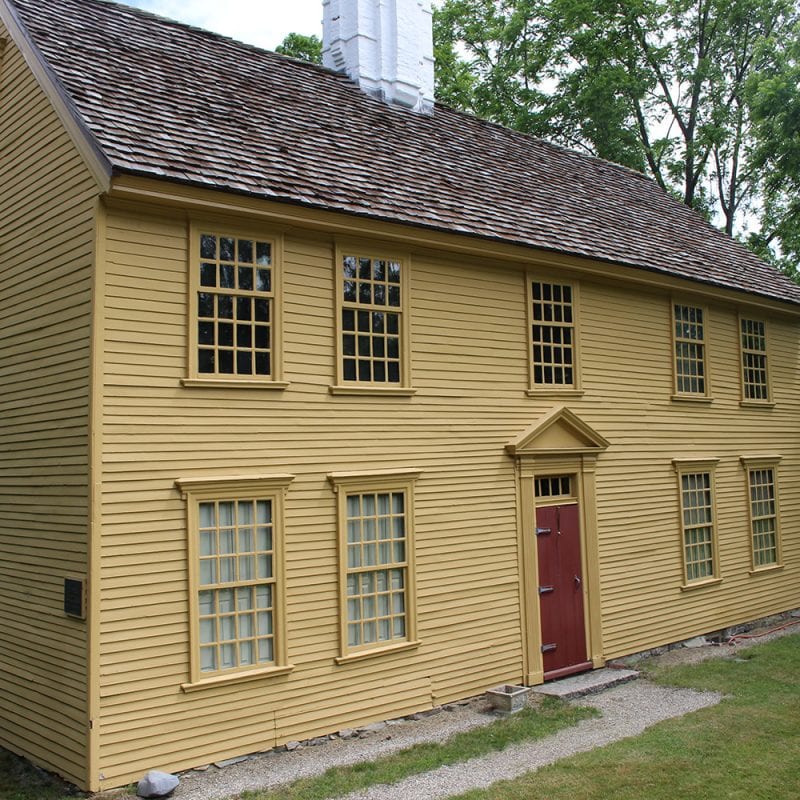 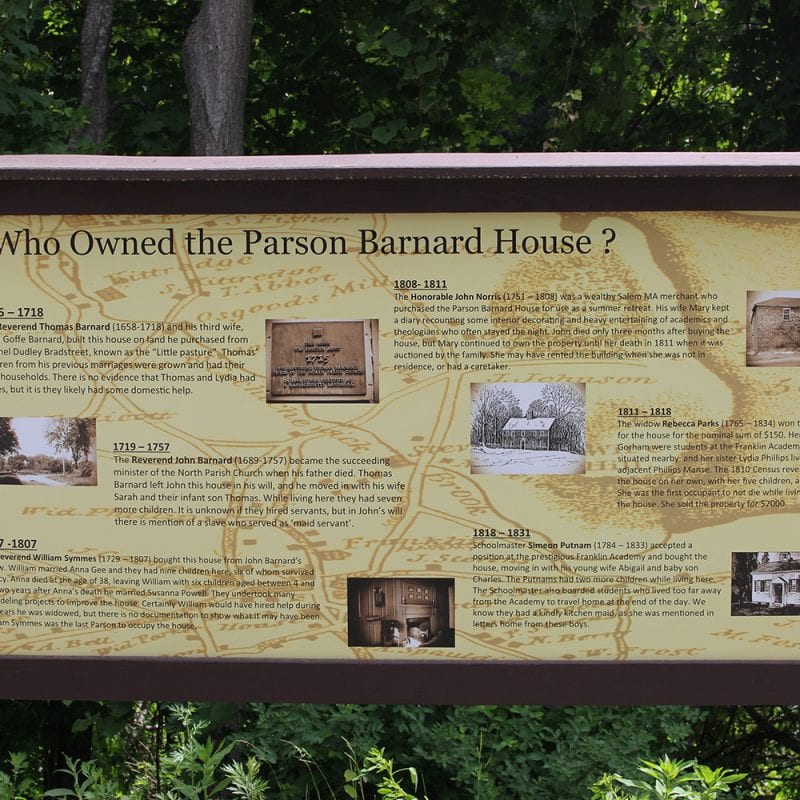 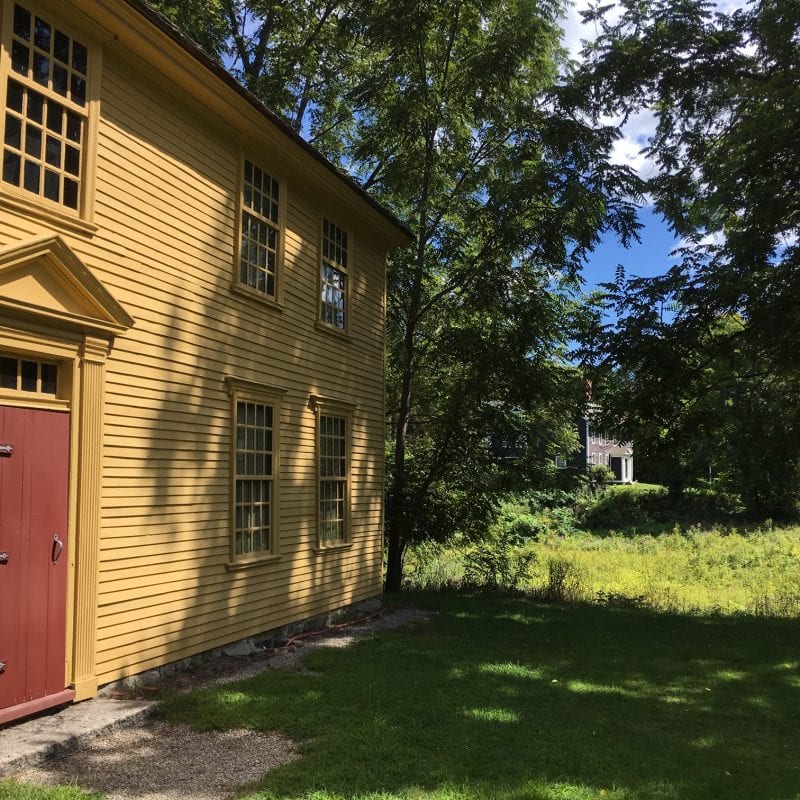 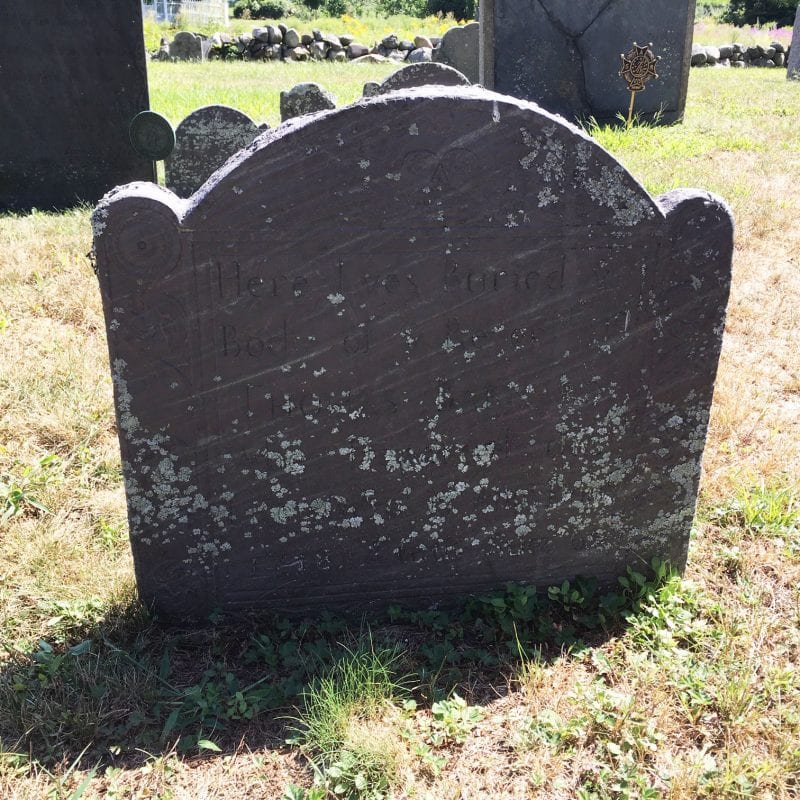 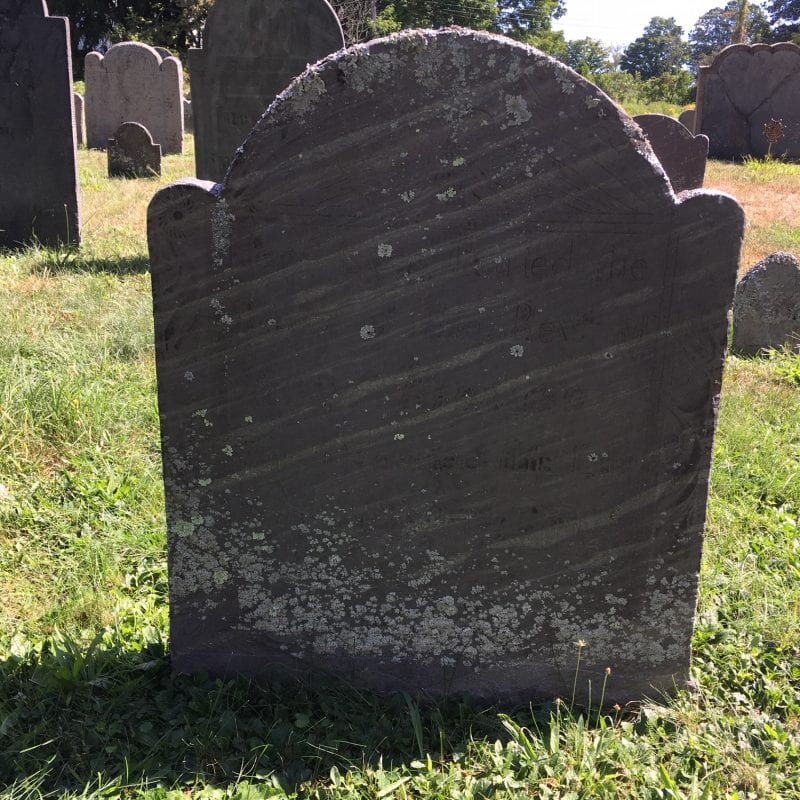