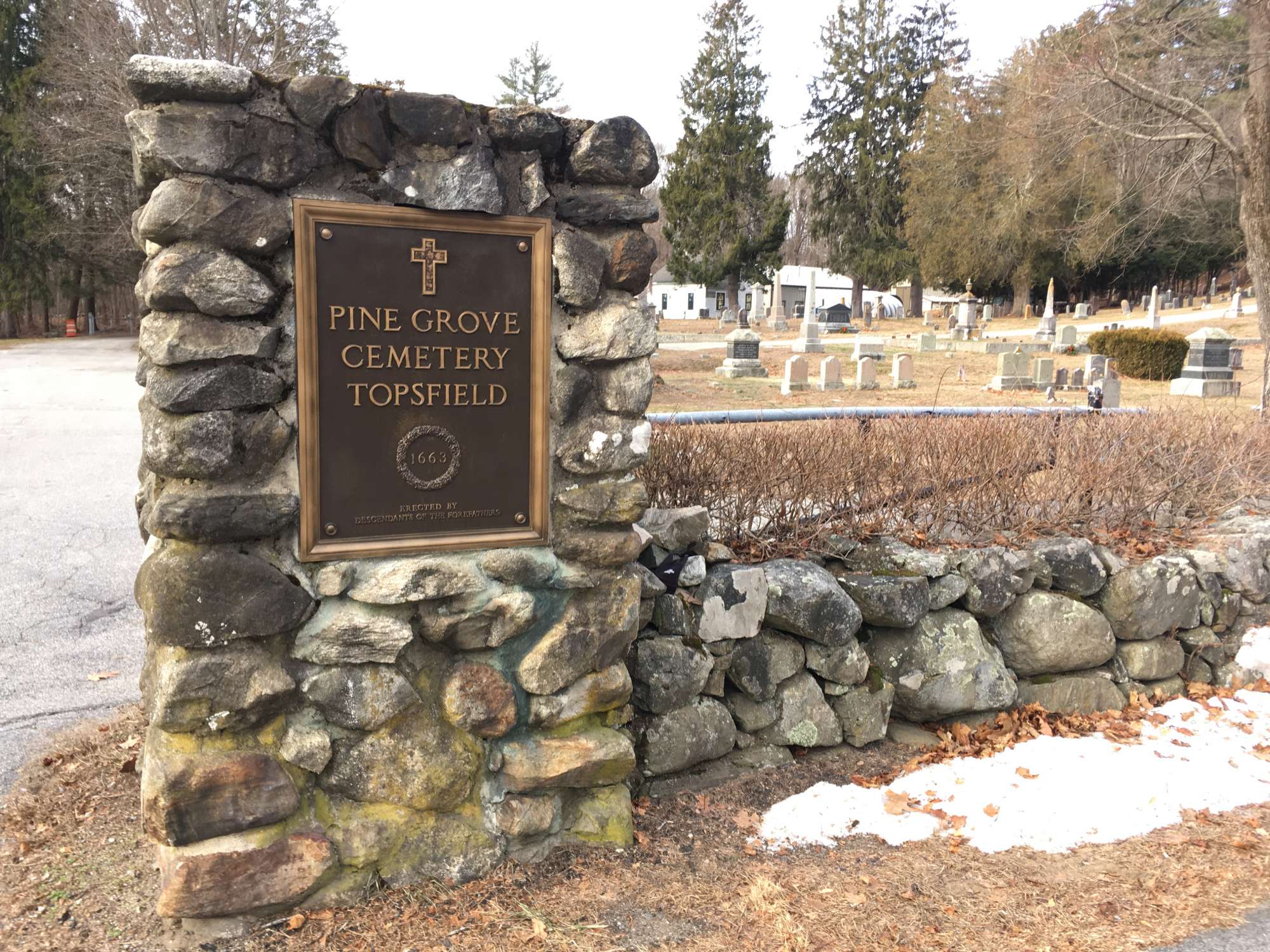 Pine Grove Cemetery on Haverhill Road was established circa 1663.

The oldest burial ground in Topsfield is the Pine Grove Cemetery on Haverhill Road (Route 97). According to historian George Francis Dow, it was laid out as early as 1663 (the year the second meeting house was built here) and the first burials were likely around that time, and perhaps earlier. In 1675, during King Philip’s War, a watch house was built, surrounded by stone walls, in the southeast corner. The first recorded mention of the cemetery is in 1706, regarding fencing around the border. The earliest readable stone at the time Dow’s History of Topsfield, Massachusetts was published in 1940 was that of Sergeant Ebenezer Averell, who died in 1717.

The oldest part of the cemetery is the southern end, where the second meeting house and watch house also stood. The first entrance was midway between the southern point and the current entrance.

The cemetery was enlarged to the north in 1848, and then again in 1883, when the 34-acre Bare Hill pasture became part of the cemetery. It was around this time when it became known as Pine Grove Cemetery, after a pine grove on the hillside.

The cemetery is filled with descendants of the earliest Topsfield settlers, among them Goulds, Averells, Wildes, Bradstreets, and Townes.

Buried here are three early ministers: Parson Joseph Capen and his wife Priscilla (whose graves are said to mark the location of the second meeting house pulpit), Reverend John Emerson, and Reverend Asahel Huntington; Dr. Richard Dexter, the town’s second doctor who began his Topsfield practice in 1774; and two leaders of Topsfield companies who fought at Lexington during the Revolutionary War.

There is a large Smith family plot in the cemetery. Robert Smith arrived in Topsfield in 1645. Five generations of the family continued to make their home in Topsfield, including Joseph Smith Sr., born in 1781. Shortly after the family moved to Sharon, Vermont, Joseph Smith Jr. was born in 1805. He published the Book of Mormon in 1830 and founded The Church of Jesus Christ of Latter-day Saints.  At 80 Boardman Lane is the site of the Smith Homestead, where ancestors of Joseph Smith once lived (the last Smith home was razed sometime between 1870-1875). The house that stands on the property today, built in 1876, is a private residence, not open to the public.

Looking toward the north, up Bare Hill