Accused of witchcraft in 1692 were the son and daughter-in-law of George Jacobs Sr., who was executed on August 19.

More About Rebecca and George Jacobs Jr. Home, Site of

Living on the east side of Salem Village in 1692 were three families, connected by friendship or politics or marriage or, in all cases, witchcraft accusations. They were Sarah and Peter Cloyce, Sarah and Daniel Andrews, and Rebecca and George Jacobs Jr. All settled on or near Frost Fish Brook, which flowed into the Frost Fish River, giving them easier access to Salem Town than the villagers who lived to the west. According to Paul Boyer and Stephen Nissenbaum’s 1974 book Salem Possessed: The Social Origins of Witchcraft, both Jacobs Jr. and Cloyce were tenants of the wealthier Andrews.

One of the oldest people to be accused of witchcraft in 1692 was George Jacobs Sr., who, at 81, lived on a farm called Northfields, halfway between Salem Town and Salem Village. Living with George Sr. and his second wife Mary was his 17-year-old granddaughter, Margaret, daughter of Rebecca and George Jacobs Jr. On May 10, accused of witchcraft by the household servant Sarah Churchill (aka Churchwell), George Sr. and Margaret were arrested and brought in for examination. George Sr. denied the charges. Margaret, afraid and under pressure, eventually confessed that yes, her grandfather and Reverend George Burroughs were both witches. She soon recanted in one of the most moving petitions to emerge from the trials. “. . . with my own vile wicked heart, to save my life; made me make the like confession I did, which confession, may it please the honoured court, is altogether false and untrue.” [read complete petition here: salem.lib.virginia.edu/n80.html]

Sarah Churchill had also accused George Jacobs Jr. – son of George Sr. and father of Margaret. By May 14, Nathaniel Ingersoll and Thomas Putnam filed a complaint against Margaret’s parents, George Jacobs Jr. and his wife Rebecca, and Rebecca’s brother, Daniel Andrews. Interestingly, the arrest warrant issued did not name Rebecca. According to Marshal George Herrick’s report the next day, when Constable John Putnam arrived to arrest George Jr., he found that he’d fled. Constable Putnam would find the same when he went to arrest Daniel Andrews. It is assumed that the two men – neighbors and brothers-in-law, fled together.

The story of Rebecca (Andrews) Jacobs is one of the many heartbreaking tales of the trials. She had apparently been mentally ill for about a dozen years by 1692. She was first accused by Elizabeth Hubbard (niece-by-marriage of Dr. William Griggs, in whose home she lived and worked as a servant), and then, as named in the May 14 complaint, by the core group of accusers: Ann Putnam Jr., Abigail Williams, Mercy Lewis, and Mary Walcott. Although not included on the arrest warrant, when Constable John Putnam arrived to arrest her husband, and found only Rebecca and four (or five) of her youngest children, ranging in age from under two to fifteen, he arrested her. Says Marilynne Roach in The Salem Witch Trials: A Day-By-Day Chronicle of a Community Under Siege, “The constable arrested her, although he had trouble persuading her to accompany them until he promised she could soon return. She may have taken the youngest child with her as it was apparently still nursing. The rest she had to leave behind. Her children ran after her crying, a long way down the road to the Village, until the cavalcade outdistanced them and disappeared.” Rebecca remained in jail for eleven months. Neighbors took the children in.

When examined, a distraught Rebecca confessed to tormenting her accusers and working with the devil, and suggested she may have killed one of her own children. Again, from Marilynne Roach, “She would speak of this often in prison. Two-year-old Mary had drowned accidentally in a well seven years earlier.” Rebecca was not tried by the time the Court of Oyer and Terminer was dissolved by William Phips in October. On November 17, Rebecca’s mother, Rebecca Fox of Cambridge, petitioned the court for her daughter’s release, describing her as “a woman crazed, distracted, and broken in her mind.”

New trials began with a new court in January of 1693. On January 4, both Rebecca Jacobs and her daughter Margaret were found not guilty. Margaret was released in February when her jail fees were paid by Beverly fisherman Philip Gammon (who later sued her for the debt – which she repaid) and Rebecca was released in March when the family was finally able to cover her jail fees.

George Jacobs Jr. returned from hiding in June of 1693. His father George Sr. had amended his will before his execution, cutting George Jr. out entirely, since he had fled after being accused. The second will was ignored in court, and George Jr. took over the farm, against his father’s last wishes.

The homestead of Rebecca and George Jacobs Jr. was in what is today the Rocky Hill Conservation area, off of Rocky Hill Circle.

Old stone walls are visible in the growth.

Another view of the Rocky Hill Conservation area, looking north.

The same view in the winter. Frost Fish Brook is visible. 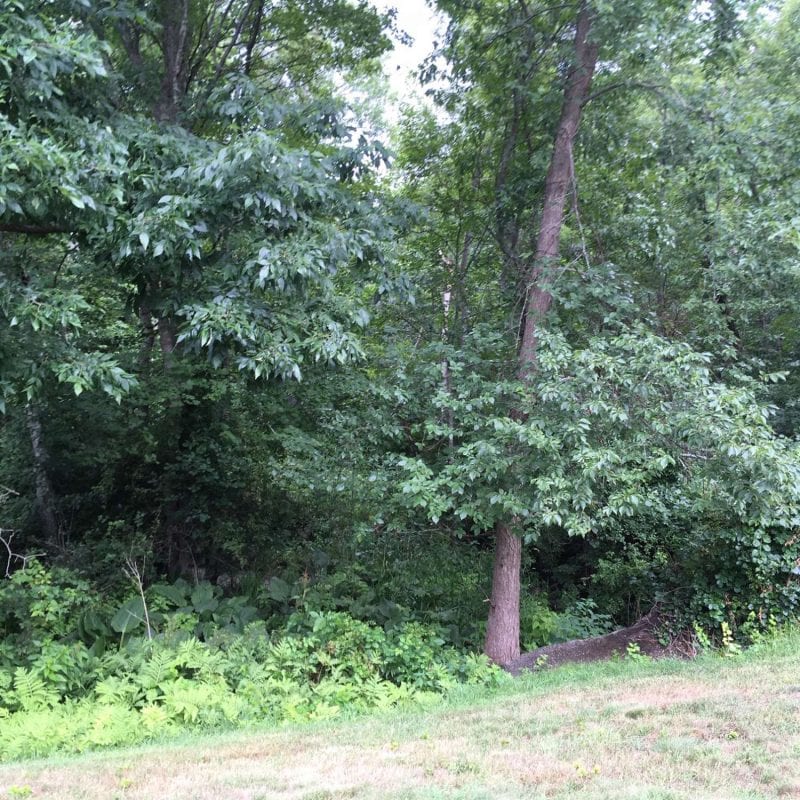 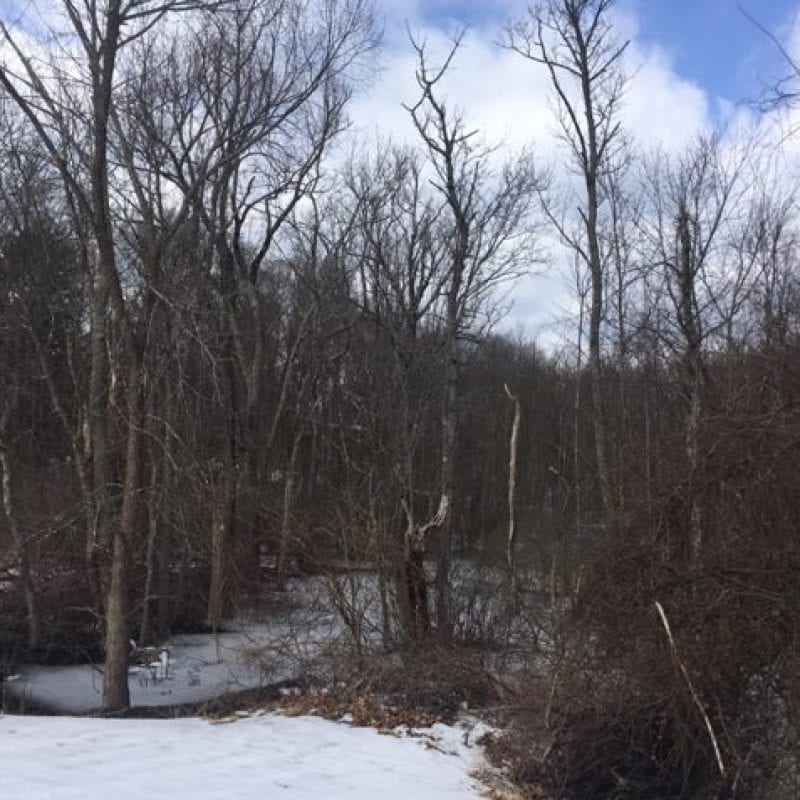