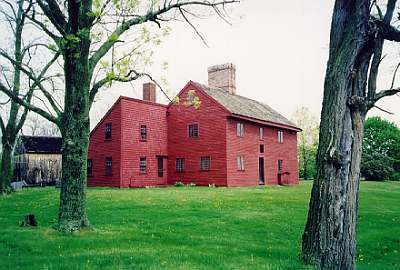 The Rebecca Nurse Homestead is one of the most important sites to visit in Danvers. Located on Pine Street, it is open from May through November. It is owned and operated by the Danvers Alarm List Company.

The first three women to be accused of witchcraft in 1692 were easy targets for a witch-hunt – Tituba, a slave; Sarah Good, a beggar; and Sarah Osborne (alternate spelling Osburn, Osborn, Osbourne), an invalid who scandalized the neighborhood by marrying a former indentured servant. However, the next two individuals to be accused were shocking. Both respected and established within the community, Martha Corey was a full communing church member and a deeply religious woman, while Rebecca Nurse was a 71-year-old devout, God-fearing woman who had raised eight children to adulthood, all of whom lived nearby. Rebecca and her husband Francis worked diligently on their 300-acre farm, located in the very center of Salem Village.

In mid-March, Ann Putnam Jr. first claimed to see a specter of an old woman sitting in her grandmother’s chair. With encouragement from others in the Putnam household, she came to the name Rebecca Nurse. (Rebecca’s son-in-law John Tarbell and son Samuel visited the Putnam house at the end of March, trying to learn just how Rebecca had come to be accused. They suspected that Ann Putnam Sr. had encouraged her daughter to name Rebecca Nurse.)

Abigail Williams also claimed to be tormented by the specter of Nurse, as did Ann Putnam Sr., when former Salem Village minister Deodat Lawson visited the Putnam home in March. Lawson watched in alarm as Ann Putnam Sr. battled with Nurse’s specter, which he himself could not see.

A “committee” of four visited Nurse around the third week of March: Israel Porter (often in dispute with the Putnams); his wife Elizabeth (who was the sister of Judge John Hathorne); Daniel Andrews (a bricklayer who worked on the Corwin house in Salem Town, who was also the brother-in-law of George Jacobs Jr.); and Peter Cloyce, the husband of Rebecca’s sister Sarah.

Nurse was ill in bed. She expressed pity for the afflicted and commented that she believed some of the accused were innocent. Her visitors explained that she, too, had been accused. Nurse was filled with incredulity and amazement. She wondered aloud – what had she done that God, “should lay such an affliction on me in my old age.”

A complaint was sworn against her by Jonathan and Edward Putnam and Nurse was arrested on March 24. In her examination at the Salem Village meetinghouse that day, the afflicted – Ann Putnam Jr. and her mother, as well as Abigail Williams, Elizabeth Hubbard, Mary Walcott, and Goody Pope – writhed and twisted. They claimed Nurse’s specter tormented them. They could see the Devil whispering in her ear and familiars in the shape of birds flocking around the room. They mimicked her movements. Ann Putnam Sr. shouted at her, and then became paralyzed. Her husband Thomas had to carry her from the meetinghouse.

In response to relentless questioning by Judge John Hathorne, Nurse said, “I am as innocent as the child unborn.” She was bewildered at the tumult. The judges ordered her to be held in Salem jail, if only for the afflictions they themselves witnessed at her examination.

In his sermon three days later, Reverend Samuel Parris revealed his topic: how the Devil could be found even within the church. “Oh, it is a dreadful thing to be a devil, and yet to sit down at the Lord’s table,” he said. Nurse’s sister Sarah Cloyce arose and left the meetinghouse, interpreting this as a direct reference to her sister. The door slammed behind her.

In April, the afflicted said that Rebecca Nurse’s specter, along with those of Sarah Good, Osborne, and Wildes, took part in a witches sabbath presided over by the specter of Reverend George Burroughs, the King of the witches. The accusers claimed to have witnessed this event in the parsonage pasture.

Also that month, Nurse’s sisters Sarah Cloyce and Mary Easty (alternate spelling Esty) were both accused of witchcraft and jailed.

On June 2 Nurse underwent the humiliating and invasive process of an intimate search of her body, in which a mole, blemish, or skin irregularity could be considered a “witch mark.” The investigating women found a suspicious mark, although two of Nurse’s daughters-in-law would later testify that an infirmity Rebecca had for years was mis-identified.

Despite relentless questioning, Nurse held firm to her innocence. When asked about her specter’s torments of the afflicted, Nurse replied, “The Devil may appear in my shape.”

In addition to the actions of the afflicted, who attended in force, there was also testimony from neighbor Sarah Houlton. In 1689, Houlton’s husband Benjamin had sickened and died after an altercation with Nurse over his pigs getting loose and ruining her garden. Sarah Houlton blamed his death on this disagreement. She thought it was witchcraft.

A petition supporting Nurse, signed by 39 members of the community, was presented to the court. Among her supporters were Israel Porter, Daniel Rea, Joseph Putnam (the half-brother of Thomas Putnam), Joseph & Sarah Houlton (the in-laws of widow Sarah Houlton) and Captain John Putnam Sr., the uncle of Thomas Putnam.

Nurse was found not guilty. The afflicted in the room reacted wildly. The outburst was enough to concern the magistrates and jury foreman. In particular, Chief Justice William Stoughton was not satisfied with the verdict. He wondered what Nurse had meant when, after Deliverance Hobbs was brought into the courtroom to testify against her, Rebecca had asked, “But she’s one of us!”? Did she mean a witch like us? Nurse was brought back into the courtroom and asked: what had she meant?

Nurse did not answer. She was old, and hard-of-hearing, and overwhelmed. She stood silently. Her silence was interpreted as an admission of guilt. The verdict was reversed, and Rebecca Nurse was found guilty. Later, Nurse explained her statement – Deliverance Hobbs had been in prison with her, how could she now be an accuser?

On July 3, Reverend Nicholas Noyes presided over Nurse’s excommunication from the Salem Town church. (This action was reversed on March 6, 1712 at the urging of Rebecca’s son Samuel. Leading that ceremony was Reverend Noyes.)

Nurse’s supporters turned to Governor William Phips for help. Phips granted Nurse a reprieve, but after an outcry from the afflicted and the Putnams, Phips backed down. Nurse was guilty and condemned to execution. Chief Justice William Stoughton signed her death warrant.

Rebecca Nurse was executed on July 19, 1692 on Proctor’s Ledge at Gallows Hill. It is believed that her family came and collected her body that evening, taking her home to be buried in an unmarked grave on the homestead.

How did such an upstanding and beloved member of Salem Village become accused?

Rebecca Towne was born in 1621 in England and moved to Topsfield circa 1635 with her family. Among her seven siblings were Mary (later Easty) and Sarah (later Cloyce). Their mother Joanna was slanderously called a witch years before 1692. Their father William had ongoing land and border disputes with the Putnams.

Rebecca married Francis Nurse, a “tray-maker,” in the 1640s. The couple “leased-to-buy” a 300-acre farm in Salem Village from Boston minister James Allen in 1678. By 1692, they had eight children, all of whom lived into adulthood. (Six had married and had homes nearby on the homestead. The youngest son, Benjamin, and his wife, lived with Rebecca and Francis. The youngest daughter, Sarah, did not marry until after her mother’s death.)

Border disputes with members of the Putnam family were ongoing. Perhaps jealousy arose regarding the Nurse farm. Perhaps their neighbors believed they owned it, rather than paying off a mortgage – which the Nurses did, diligently and responsibly. Some, including Ann Putnam Sr., may have envied the Nurses their eight grown children. Ann and her sister had both lost children. It was likely a combination of grievances that led to the targeting of Rebecca Nurse.

A brief history of the homestead

The property, some 300 acres, was originally granted to Townsend Bishop in 1636. On this property he constructed a house and planted gardens and orchards. Bishop sold the land in 1641 to Henry Chickering. In the late 1640s, it was purchased by Governor John Endicott (which made his area holdings close to one thousand acres) and was subsequently inherited by Endicott’s eldest son, John Jr.

When John Jr. died in 1668, his widow Elizabeth inherited the property. She remarried, to Reverend James Allen of Boston. The Nurses “leased-to-buy” the 300-acre farm in 1678 from Reverend Allen. Today, 27 acres remain of the original 300.

Francis Nurse died in 1695. The house stayed in the Nurse family until 1784 and was then bought by a descendant of the second generation of the Putnam family. In 1885, the highlight of a family reunion was the unveiling of a memorial stone in tribute to Rebecca Nurse, engraved with a poem written especially for the occasion by John Greenleaf Whittier (a direct descendant of the executed Susannah Martin). In 1926, the house was acquired and restored by the Rebecca Nurse Memorial Association. Since 1981, the property has been owned by the Danvers Alarm List Company.

Replica of the Salem Village meetinghouse

The American Playhouse film Three Sovereigns for Sarah was filmed in 1984 and aired in 1985. A replica of the first Salem Village meetinghouse was built on the Rebecca Nurse Homestead property, with the help of Danvers historian Richard Trask, who studied old records to advise on the building’s creation. The film focuses on the three sisters:  Rebecca Nurse, hanged on July 19; Mary Easty, hanged on September 22; and Sarah Cloyce, who was convicted of witchcraft but managed to elude execution. Vanessa Redgrave played the title role of Sarah Cloyce.

Visitors to the homestead can tour the building. It is fascinating to imagine what it might have been like to sit for hours each Sunday, in all temperatures, and listen to sermons. It was in the first meetinghouse where Reverend Samuel Parris’s sermon of March 27 included the words, “Have I not chosen you twelve, and one of you is the Devil,” which caused Sarah Cloyce to rise and leave the meetinghouse, slamming the door behind her. Her sister Rebecca was in jail. Sarah’s turn would come, as would her sister Mary’s.

Examined in the meetinghouse were the first three to be accused – Sarah Osborne, Sarah Good, and Tituba, as well as Rebecca Nurse, Dorothy Good, Martha and Giles Corey, Bridget Bishop, and Mary Easty.

A short walk down a sloping path to the back of the property brings visitors to the graveyard, where members of the Nurse and Putnam families are buried. Also here are the only known remains of an executed victim of 1692 – George Jacobs Sr.  – who was exhumed from his own property in Salem and reburied here in 1992. It is believed that Rebecca Nurse is also interred here, in an unmarked grave.

Replica of the first meetinghouse at the Rebecca Nurse Homestead, photographed in 2008.

A memorial to Rebecca Nurse, dedicated in 1885. It is inscribed with words from John Greenleaf Whittier.

The gravestone of George Jacobs, whose remains were re-interred here in 1992.