The elder minister in Andover in 1692 was Reverend Francis Dane. At seventy-six years old, Reverend Dane offered a rare voice of reason in this turbulent time.

Francis Dane arrived in Andover in 1648 and became the town’s second minister in 1649. In 1681, more than a decade before the witch delusion began, the Andover town selectmen petitioned the General Court for permission to hire a new, younger minister, as Dane’s age and infirmities were preventing him from handling his ministerial duties. Reverend Thomas Barnard, 25, was engaged in 1682. While many likely thought Dane would step down, he refused, and expected to collect a salary. The selectmen, on the advice of the General Court, agreed to pay Dane £30 per year and Barnard £50 per year. If there were divisions in the community regarding this situation, there are no existing petitions or records that confirm any animosity toward one or the other minister.

While the witch accusations began in Salem Village in February of 1692, they did not reach Andover until late May, when the first to be accused, Martha Carrier, was arrested and taken to Salem for questioning. She was suspected of bringing smallpox to Andover in 1690. She was an argumentative woman. And, perhaps most importantly, she was the sister-in-law of Roger Toothaker of Billerica, who had already been arrested for suspicion of witchcraft. In the seventeenth century it was believed that witchcraft ran in the family, so once one family member was arrested, it often led to other arrests.

Martha Carrier’s mother, Faith (Ingalls) Allen, was the sister of Reverend Francis Dane’s first wife, Elizabeth Ingalls. Elizabeth, who died in 1676, was the mother of all six of Dane’s children. Perhaps it was this family connection that led to so many of Reverend Dane’s relatives being accused of witchcraft in 1692. According to Emerson Baker in A Storm of Witchcraft: The Salem Trials and the American Experience, twenty-eight members of Dane’s immediate and extended family were accused.

Reverend Dane had also defended Andover’s John Godfrey against charges of witchcraft in the 1660s. Was this a factor in 1692? Whether this had an impact or not, Reverend Dane was against the proceedings in 1692, rejected the use of spectral evidence, and is remembered in history as one of the few courageous voices of resistance.

This did not save Dane or his family from accusation. Accused and jailed were Abigail Faulkner and Elizabeth Johnson, two of his daughters. The former was convicted and only escaped execution because she was pregnant when arrested. The trials were over by the time Abigail gave birth in March of 1693. Dane’s daughter-in-law, Deliverance (Haseltine) Dane, married to his son Nathaniel, was also arrested and jailed. Five of Reverend Dane’s grandchildren were accused: two of Abigail Faulkner’s daughters (aged twelve and nine), and two daughters and one son of Elizabeth Johnson’s (aged twenty-two, fourteen, and eleven). Of his extended family, Martha Carrier and Elizabeth How, both nieces by marriage, were hanged as witches.

Reverend Dane himself was briefly mentioned as a possible witch. On September 7, the accused and afflicted of Andover were called to the meeting house for a “touch test,” a method whereby it was believed witches could be identified if their touch “cured” the afflicted. Two of those identified as witches during this event were Dane’s daughter-in-law, Deliverance Dane, and a member of one of the most wealthy and prominent families in Andover, Mary Osgood.

During Deliverance Dane’s examination, she said the devil had permission to appear in Reverend Dane’s shape. When Mary Osgood was examined, however, she exonerated Reverend Dane, saying the devil could not appear in the shape of an innocent person. Reverend Dane was not accused again.

By the summer of 1692, it was noted that those who confessed to witchcraft were spared, while those who claimed innocence were hanged. Many accused in Andover did confess. Abigail Faulkner was a rare exception. Both Martha Carrier and Elizabeth How also declared their innocence to the end.

By the fall of 1692, it was clear that those who had confessed were frightened and pressured by their interrogators, and were giving false confessions. Six women who had admitted to being witches after the September 7 “touch test” declared their confession “was no other than what was suggested to us by some gentlemen, they telling us that we were witches, and they knew it, and we knew it, which made us think that it was so … also the hard measures they used with us rendered us incapable of making our defense, but said anything and everything which they desired, and most of what we said, was but, in effect, a consenting to what they said.”

With so many innocent people from Andover accused and jailed (more than any other town), Reverend Dane led the effort to free them by drafting and signing a number of petitions. On October 18, he was the first of 26 signers of a petition in support of “those falsely accused.” Among the other signers were Reverend Thomas Barnard, Dane’s son and Deliverance’s husband, Nathaniel Dane, and members of the prominent Osgood family. Reverend Dane’s letter to the General Court in January of 1693 said, “Our Sinne of Ignorance wherein we thought we did well will not excuse us, when we knew we did amiss…”

The Court of Oyer and Terminer was dissolved in October of 1692. New trials were heard by a new court, one that did not accept spectral evidence,  in January of 1693. After all remaining accused were either found not guilty, or reprieved, the jails slowly emptied. The last were released in May.

Said Sarah Loring Bailey, in her 1880 book Historical Sketches of Andover, “When the community was frenzied with the witchcraft delusion, Mr. Dane was one of the few men whose judgement remained unshaken, and whose courage was not daunted by fear of personal danger.”

Francis Dane was born in Hertfordshire, England in 1615, the son of John Dane, an early settler of Ipswich and Roxbury, and his wife Frances (Bowyer) Dane. Francis Dane emigrated to Massachusetts with his parents in 1636, and arrived in Andover in 1648, becoming the town’s second minister in 1649. Reverend Dane’s first wife was Elizabeth Ingalls, who was the mother of all six of his children. Elizabeth (Ingalls ) Dane died in 1676. Reverend Dane’s second wife, who he married in 1677, was widow Mary (maiden name unknown) Thomas. She died in 1688/89. In 1690, he married the widow of George Abbot, Hannah (Chandler) Abbot, who was his step-sister. Hannah’s widowed mother Annis had married Francis Dane’s father John in 1643.

Francis Dane was the minister of Andover from 1649 until his death in 1697. He is buried in an unmarked grave in the First Burial Ground.

According to the Plan of Andover in the Province of Massachusetts Bay, Essex County, 1692, a map created by the Andover and North Andover Historical Societies in 1992, Reverend Francis Dane lived on present-day Court Street, approximately opposite the re-located Bridges House. It would have been a short walk to the meeting house and burial ground from the parsonage.

Another view of the parsonage site where Reverend Francis Dane lived.

A sample of Dane's handwriting, from Francis Dane's commonplace book, in the collection of the New England Historic Genealogical Society. For more information, see http://digitalcollections.americanancestors.org/cdm/ref/collection/p15869coll26/id/1047 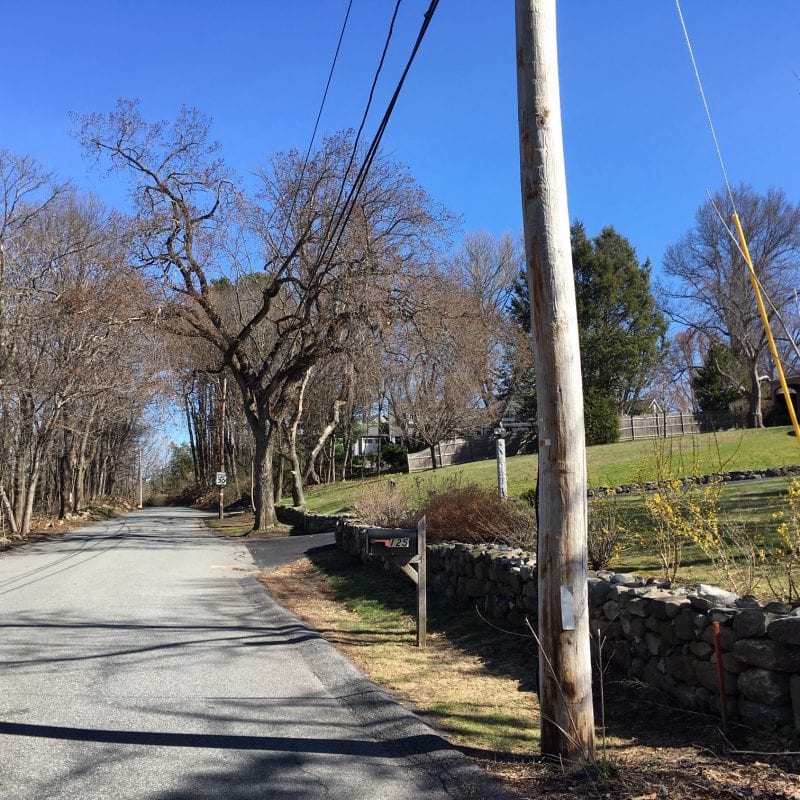 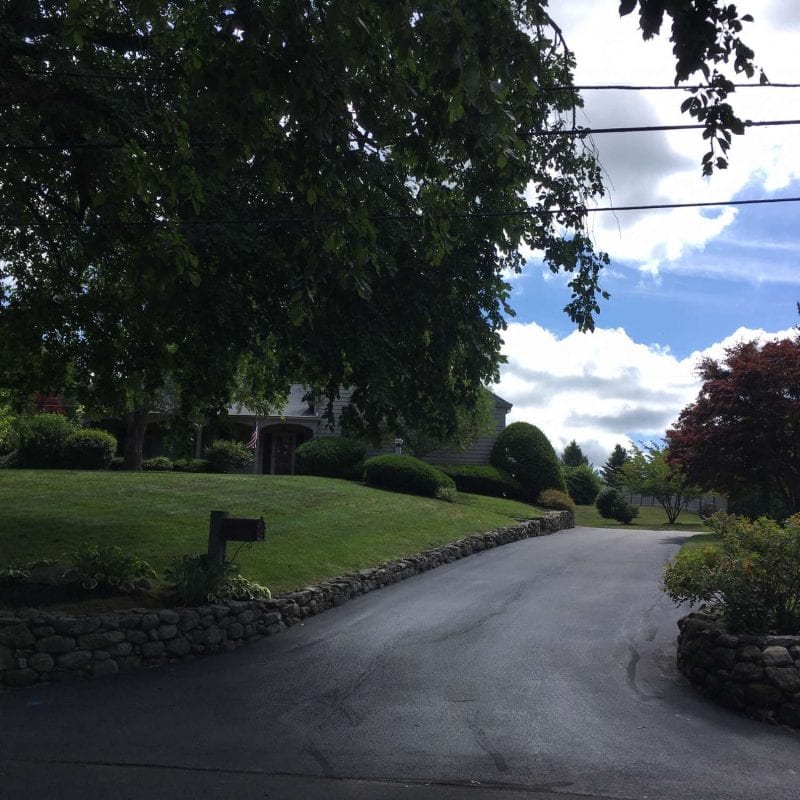 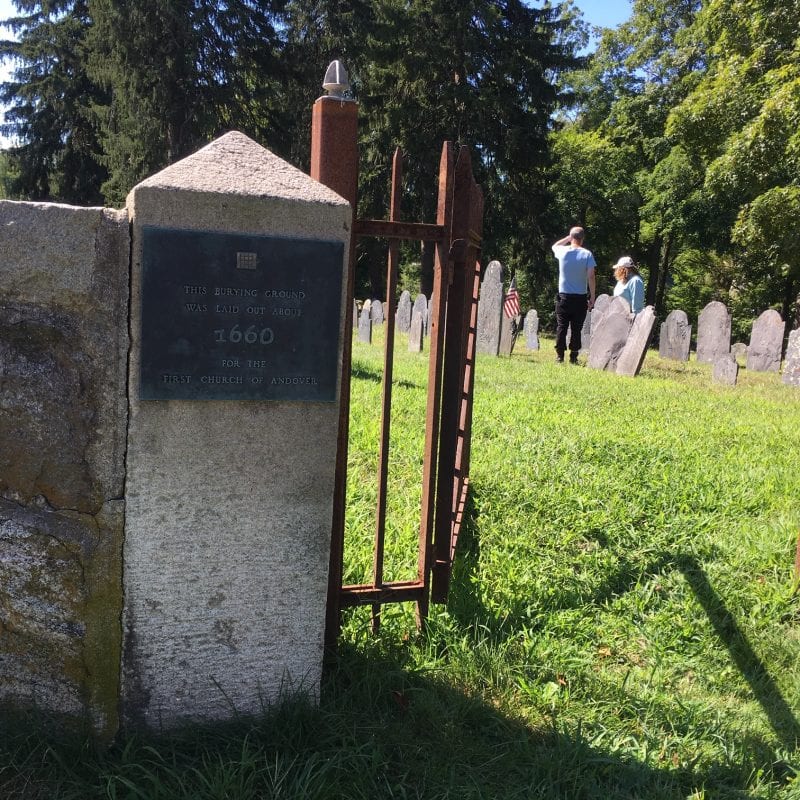 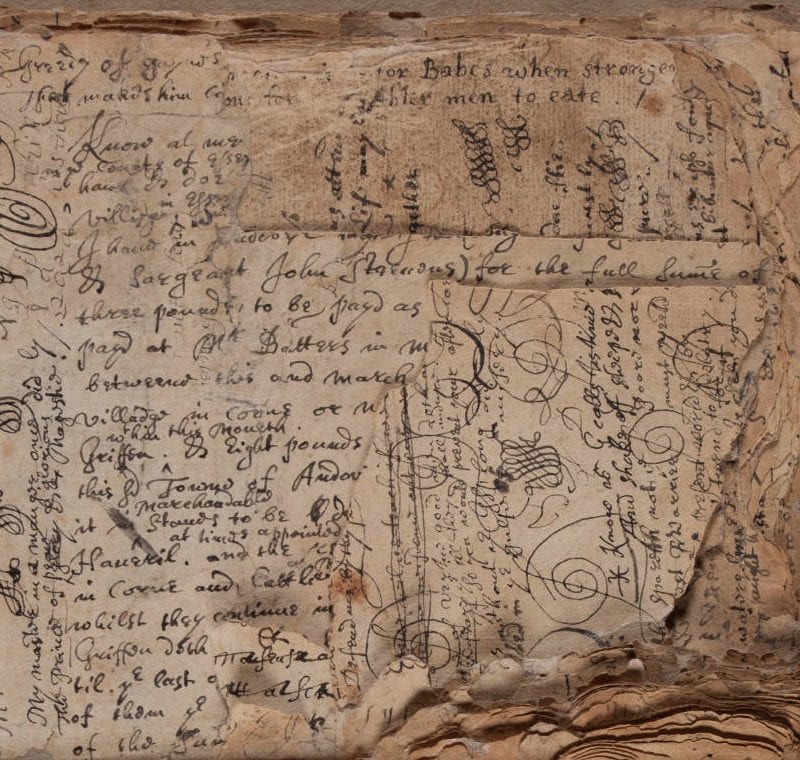