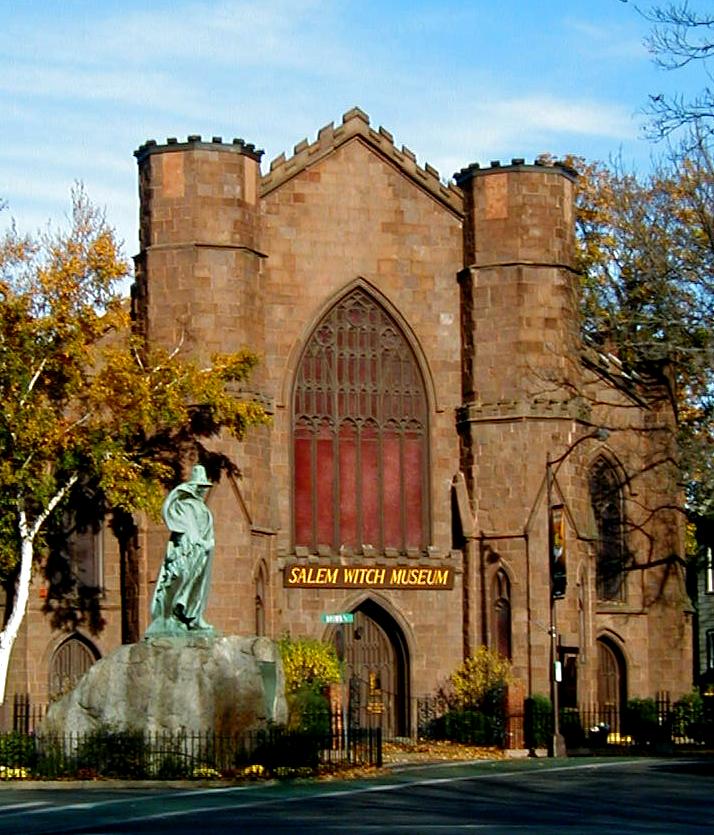 Standing today at 19-1/2 Washington Square North on the edge of the Salem Common is the Salem Witch Museum. Opened in 1972, the mission of the museum is to give a voice to the innocent victims of witch hunts, from 1692 to the present day. The museum’s two historical exhibits offer an overview of the 1692 witchcraft trials, followed by a staff-led tour titled “Witches: Evolving Perceptions.”

In 1692, the property where the museum and one building on each side stand today belonged to Reverend John Higginson. It is believed his home was located close to the street, approximately where the museum is located. At 76, Reverend Higginson was the elderly minister of Salem, assisted by the 45-year-old Nicholas Noyes. Higginson had served in Salem since 1660. It was said, “He uses soft words, but hard arguments.”

Early in his ministerial career, Higginson had been strongly against the Quakers, but later regretted his stance. His became a more moderate view of human differences. As the witchcraft trials moved forward, he tended to stay out of the turmoil. He was involved with questioning 4-year-old Dorothy Good on March 26 after the toddler had been sent to prison by John Hathorne. Joining Hathorne and Jonathan Corwin in her examination, one might think Higginson was concerned for the child’s welfare. He was also present, along with Beverly’s Reverend John Hale, to observe the questioning of Mary Warren in Salem jail on May 12. Later, after the witchcraft trials were over, Higginson would write the introduction to Hale’s Modest Enquiry into the Nature of Witchcraft.

Despite his guarded views of the witchcraft accusations, Reverend Higginson’s own family was pulled into the fray. On June 6, an arrest warrant was issued for Reverend Higginson’s daughter, Ann Dolliver.  Ten years before, she had married Gloucester fisherman William Dolliver, who had deserted Ann and their three children. Ann returned to Salem with her children to live with her father and stepmother. Sad and depressed, and, according to her father, “crazed in her understanding,” Ann would battle melancholy for the rest of her life.

Mary Walcott and Susanna Sheldon accused Mistress Dolliver of witchcraft, focusing especially on two wax poppets she had admitted to possessing. They also said Dolliver wished her father dead. When questioned by the three Salem magistrates Hathorne, Corwin, and Gedney, Dolliver not only admitted to using “counter-magic” with her poppets, but also said she used witchcraft “not with intent to hurt anybody” and also admitted that she had once stayed out in the woods all night. Although Dolliver was jailed, she never came to trial and returned to live with her father in his house on the Salem Common.

John Higginson was born in 1616 in Leicestershire, England. He arrived in Salem in 1629 with his father Francis, who became the first minister of Salem. Francis died at the age of 43 when John was only 13. John Higginson attended Harvard, and then worked and ministered in Connecticut until 1659. He married his first wife Sarah who was the daughter of the Guilford, Connecticut minister. His second wife Mary was the daughter of the Stratford, Connecticut minister.

On a sea voyage headed back to England in 1659, a storm forced Higginson’s ship to land in Salem. Ultimately, he never left Salem and was minister of the First Church from 1660 until his death in 1708 at the age of 92.

Additional note: Reverend Higginson’s son John, brother to Ann, was sworn in as a new Essex County justice of the peace on June 11, 1692. Despite the fact that his own sister was accused of witchcraft and jailed, and his father was less than enthusiastic about the trials, son John apparently believed in both spectral evidence and the touch test. He took part in a hearing on July 15 of Ann Foster of Andover, questioned in Salem Village. Accused of afflicting Elizabeth Hubbard and Mary Walcott, Ann Foster confessed to witchcraft, and claimed she was encouraged by Martha Carrier to carry out her torments. She was questioned four times, with Higginson present at each examination. Foster claimed to have worked with the Devil for six years, and told elaborate stories about flying to witch meetings and attending witch picnics, implicating Reverend Burroughs as the group’s leader. Foster would be convicted on September 17 along with eight others. She may have escaped execution because, as historian Marilynne Roach points out, “not all of the condemned could be executed at one time.” The last mass hangings took place on September 22. Foster was not included in this group.

Our present-day building was built between 1844 and 1846. Originally housing the Second Unitarian Church of Salem, this brownstone-and-brick Gothic Revival structure remained a fully operational church until 1902. Though the building was left uninhabited for a time, the exterior went through a series of minor changes, the most substantial taking place in 1925 when the octagonal towers were reduced from their original height to their present size. In 1957, the building was once again inhabited, this time by the Salem Auto Museum. When the Salem Auto Museum was damaged by a fire, the building was purchased by Holly and Tom Mulvihill, who founded the Salem Witch Museum. The ribbon cutting for the Salem Witch Museum was on May 6, 1972, and has taught the history of the Salem witch trials to visitors from all over the world ever since.

Vintage image of the building when it was still a Unitarian Church, with towers at their original size. 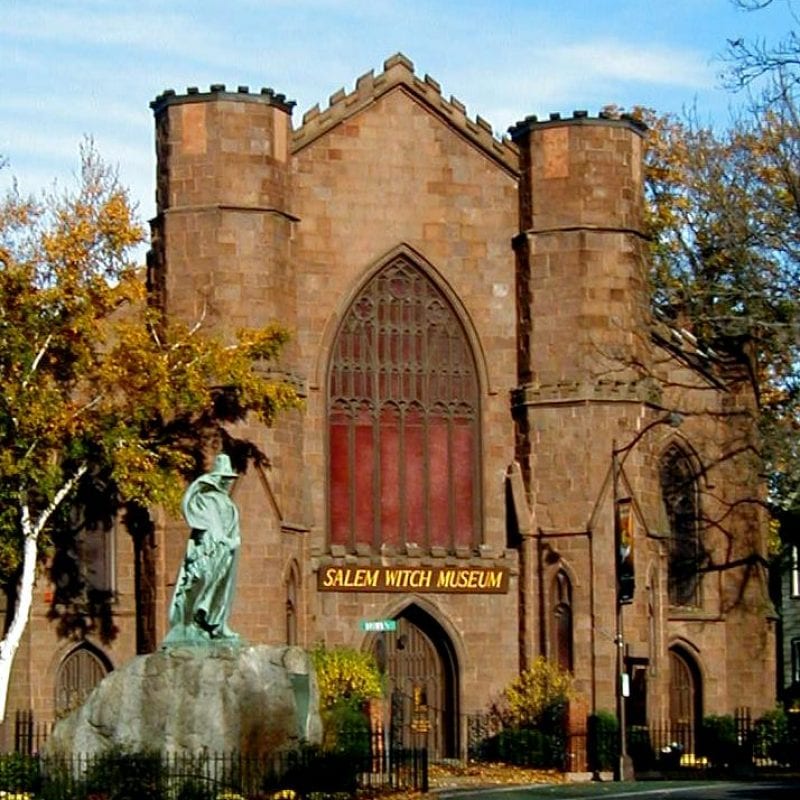 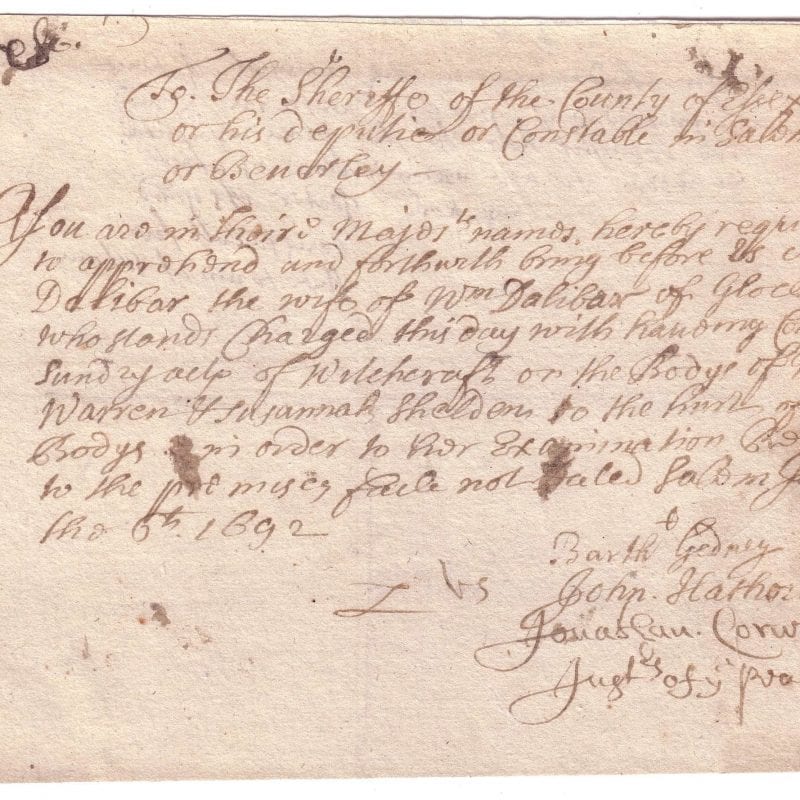 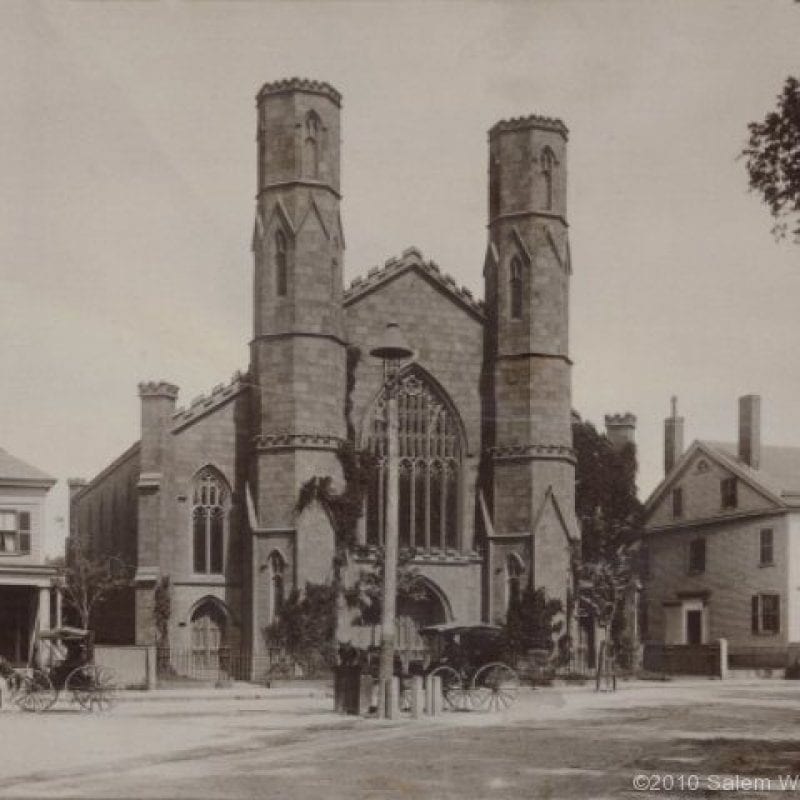 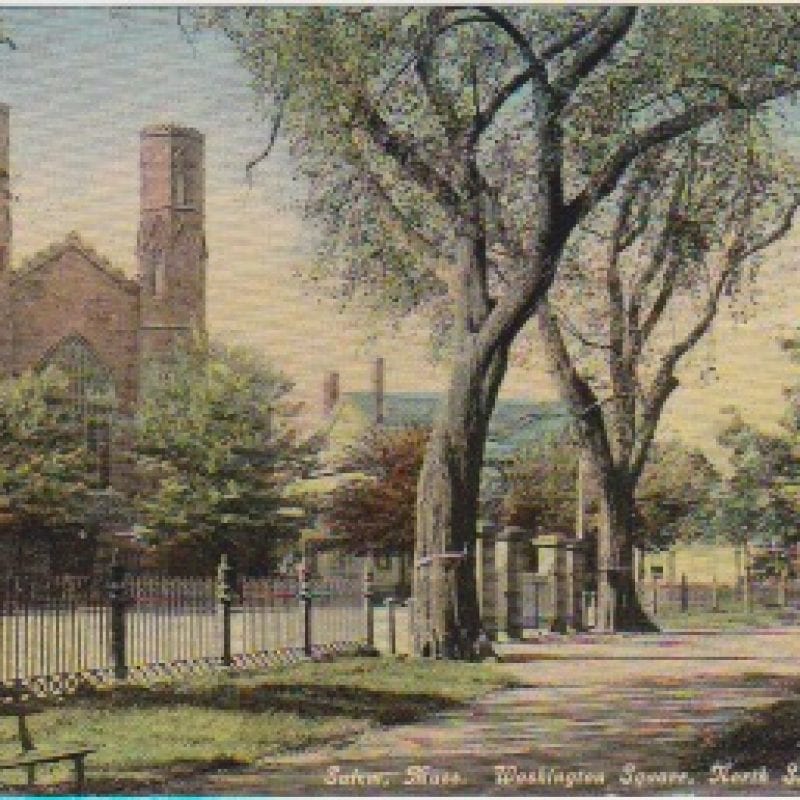 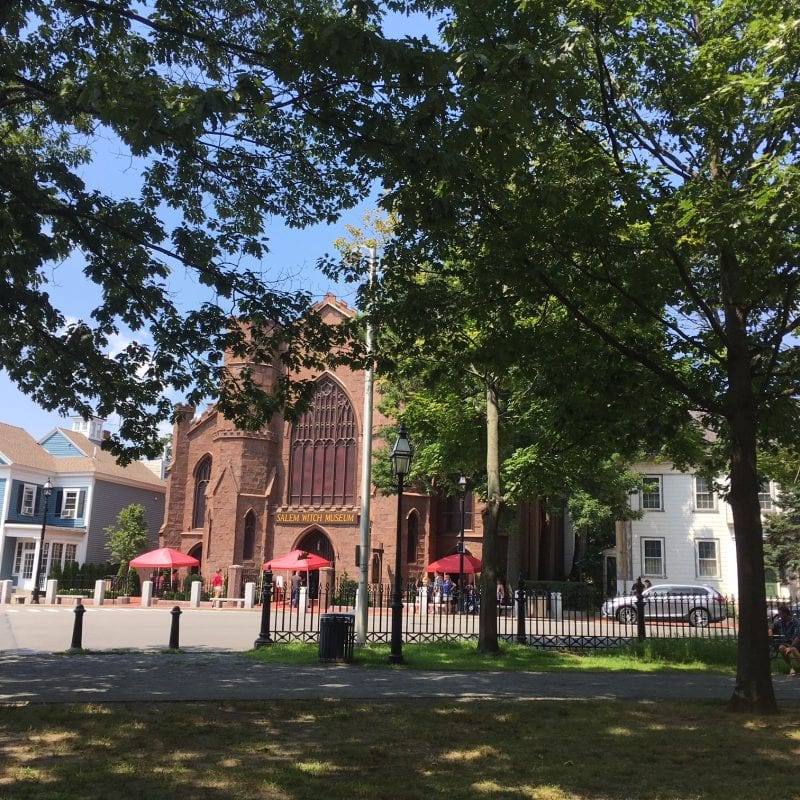