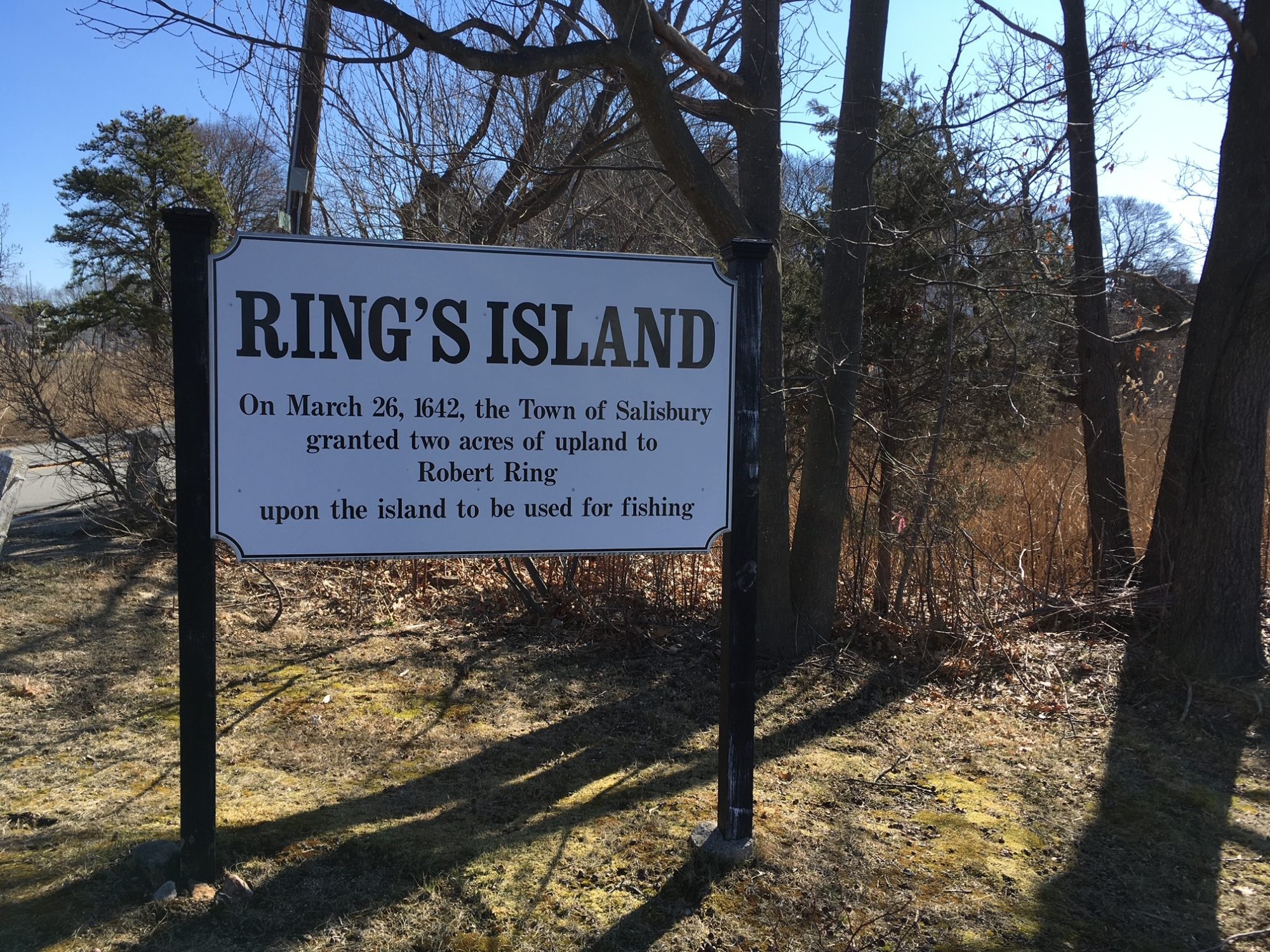 Salisbury’s Ring’s Island was named after original settler Robert Ring. Two of his sons were accusers during the Salem witch trials.

One of the most fascinating Salisbury histories is that of the Ring family. Robert Ring, a a cooper, fisherman, and farmer, was an early settler who arrived in the New World in 1638 on the ship Confidence when he was about 24 years old. Although listed as John Sanders’ indentured servant in the ship’s record, he may have lacked the funds to pay both his passage and to acquire land, and so likely made a deal with Sanders, a fellow passenger from Wiltshire, England. Sanders, granted 50 acres in Salisbury, gave Ring a portion of it. Ring’s house lot at the top of Mudnock Road was very close to  the meeting house and adjacent to Sanders’ lot. In his 1880 book History of Amesbury, Including the First Seventeen Years of Salisbury, historian Joseph Merrill says Robert Ring was also granted two acres in 1642 on the southeastern edge of Salisbury, on the Merrimack River, for his fishing business. It has been known as Ring’s Island ever since (although it is now  a peninsula, attached to the mainland).  Merrill calls Ring’s Island “…the great resort of the fishermen. Here their ‘stages’ or fish-flakes were spread on which the fish were dried, and the store houses built to contain the products of their labors.”

According to a fascinating article at findagrave.com, Ring returned to England for about nine years, from 1643-1651, where he married and had two daughters. The family returned to Salisbury circa 1652, where five more children were born. Although Ring served as a town selectman and trial juror many times between 1655 and 1686, he also had his share of troubles in court.  Robert Ring died in 1690, two years before the witch trails got underway.

Fifty years after Ring first established his fishing business on Ring’s Island, two of his sons, Joseph and Jarvis, accused Susannah Martin of witchcraft in 1692. Susannah North’s childhood home (on what is Route 110 today) was a short distance from the Ring home on the circular road; she then moved west to what would become Amesbury, after her marriage to George Martin.

Thirty-four-year-old Jarvis Ring claimed, in a deposition taken by Robert Pike, that “he had been several times afflicted in the night-time, by some body or some thing coming up upon him when he was in bed … one time, in the night, it came upon me as at other times, and I then did see the person of Susanna Martin, of Amesbury. Pike’s notes go on to say, “…[she] bit him by the finger by force, and then came and lay upon him awhile, as formerly … The print of the bite is yet to be seen on the little finger of his right hand, for it was hard to heal.” This affliction by Martin’s specter was said to have taken place seven or eight years earlier.

Even more peculiar was brother Joseph’s story. In late April of 1692 (around the time Susannah Martin was arrested for witchcraft), 27-year-old Joseph claimed that Martin’s specter came to his bedroom and pinched him, an act which released him from a spell of muteness he’d been experiencing since the previous summer. Says historian Marilynne Roach in her book The Salem Witch Trials: A Day-By-Day Chronicle of a Community Under Siege, “Even before that last mute episode, for two years, as he said when he was able to speak, witches kept snatching him away to observe their meetings, and would then stop his speech to keep their secret.” Joseph Ring saw Martin at these meetings and, Roach says, “Others verified that he had certainly been absent on these occasions. He had even been observed on the road and then vanished from view.”

In his deposition, Joseph Ring was even more concerned about a man named Thomas Hardy of Maine. Ring was part of the militia that traveled in 1690 to Fort Loyal (in Falmouth, Maine, present-day Portland), but arrived too late to save it from Native forces who burned it, and several surrounding towns, to the ground, killing most of the settlers. By 1692, Ring believed that fellow-soldier Hardy, who lived on Great Island in the Piscataqua River and to whom Ring owed a gambling debt of two shillings, was allied with both the devil and the native Wabanaki. Perhaps the atrocities Ring witnessed in Maine left him with what today we call PTSD, or Post Traumatic Stress Disorder. Again, from Roach, “Joseph kept encountering [Hardy] (or his specter) on the road among men and women on horseback, or with Goody Martin and others chatting and drinking cider in the woods before turning into black swine.” Emerson Baker, in his book The Devil of Great Island says, “His [Joseph Ring’s] inability to help Falmouth may have haunted Ring ̶ so much so that he soon felt under assault by witches . . . One day . . . he met Thomas Hardy in the company of a fireball and several supernatural beasts. Hardy demanded his two shillings back from Ring. Over the next few months, Ring reported he had a series of supernatural encounters with Hardy . . . Several times Satan himself came to Ring, tempting him to sign his book. Susannah Martin and other unnamed witches were present at some of these meetings where covens gathered.” Baker observes, “After reading Ring’s deposition, in which Thomas Hardy is clearly the central figure, it is hard to believe that Susannah Martin was executed for witchcraft, while no formal proceedings appear to have been initiated against her accomplice, Hardy.”

An Associated Press article, written by Joseph Ring descendant Wilson Ring in 2011 and shared by the Salisbury Historical Society, adds even more colorful, and tragic, details about Ring’s life. In addition to his personal military experience with Native attacks in Maine in 1690, Joseph Ring’s wife Mary Brackett had her own traumatic memories. Quoting from the AP article: “As a 12-year-old girl, she and some relatives had been taken captive by a party of Indian raiders and marched into the wilderness before they escaped in a canoe. Later, in separate incidents, her grandparents, father and brother were killed.” Between his own and his wife’s experiences, one can only imagine Joseph Ring’s extreme fear of the native people. In 1703, during Queen Anne’s War (1702-1713), Wilson Ring speculates that Joseph Ring, although not officially in the military, may have been a bounty hunter hoping to avenge his losses by seeking Indian scalps. On January 28, 1704, natives attacked the Neale Garrison in Eliot, Maine. They were fended off, and nine were killed. Wilson Ring shares this information from a 1726 history by Samuel Penhallow, “[The losses so enraged the Indians] that at their return they executed their revenge on Joseph Ring, who was then a captive among them, whom they fastened to a Stake and burnt alive.”

The location of Robert Ring’s first house lot is near 3-5 Mudnock Road, close to the John Sanders House (the oldest in Salisbury). The houses that stand in this neighborhood today are private residences, not open to the public. Ring’s Island can be accessed by taking the first right onto First Street, after crossing the Gillis Memorial Bridge over the Merrimack River, when traveling from Newburyport to Salisbury.

Another view of the Ring location on Mudnock Road.

In 1642, Robert Ring was granted two acres in 1642 on this peninsula, called Ring's Island to this day.

The 1892 Community House on Ring's Island is the home of the Union Chapel Museum.

The view from Salisbury to Newburyport across the Merrimack River.

The Jonathan Dole House was built in 1680. Dole was married to one of Robert Ring's daughters. The renowned poet Edna St. Vincent Millay lived in this house for a short time during her childhood. 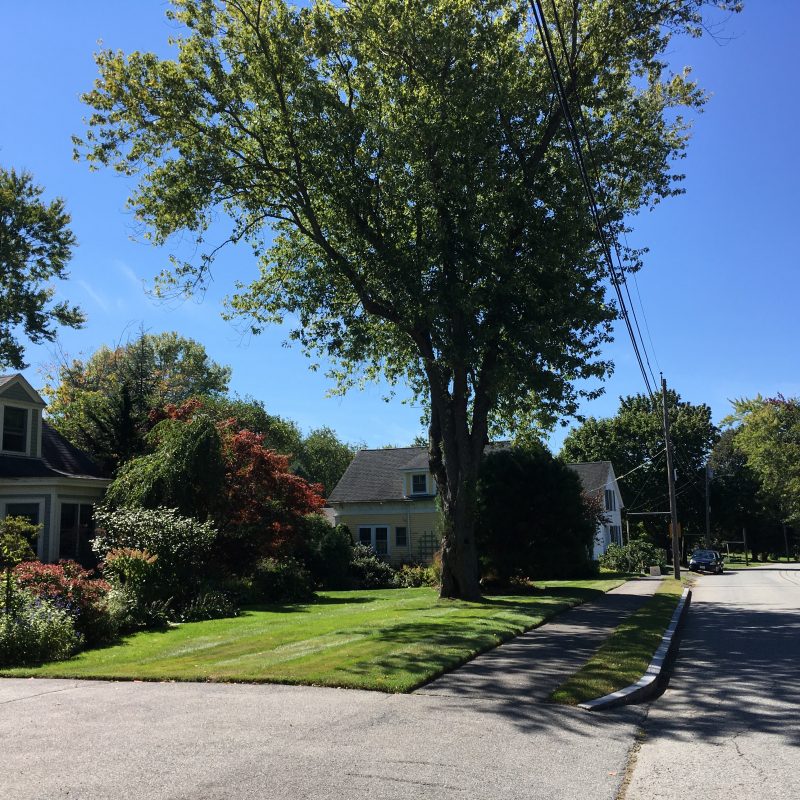 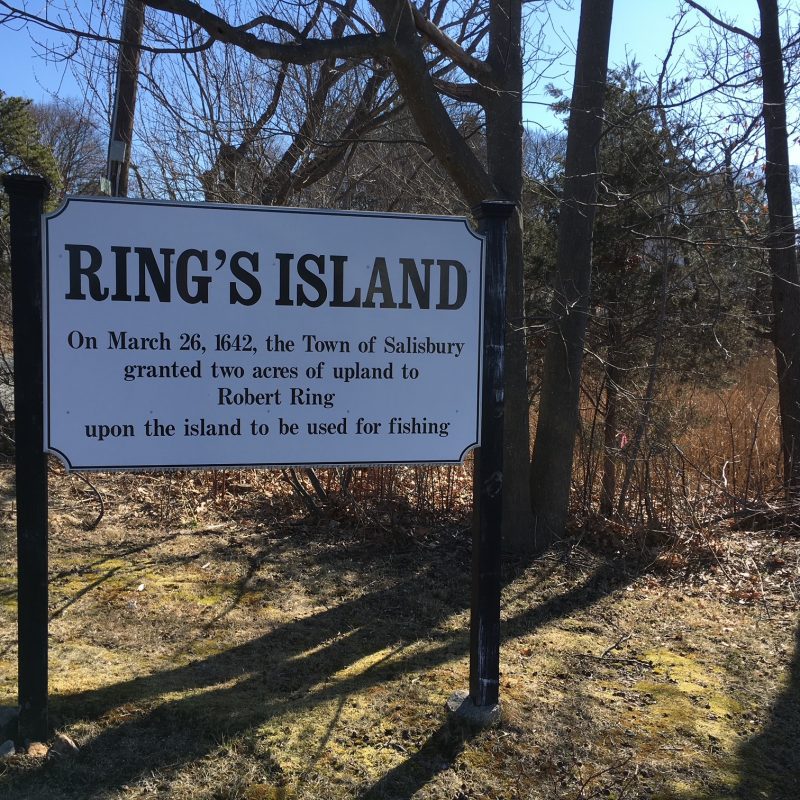 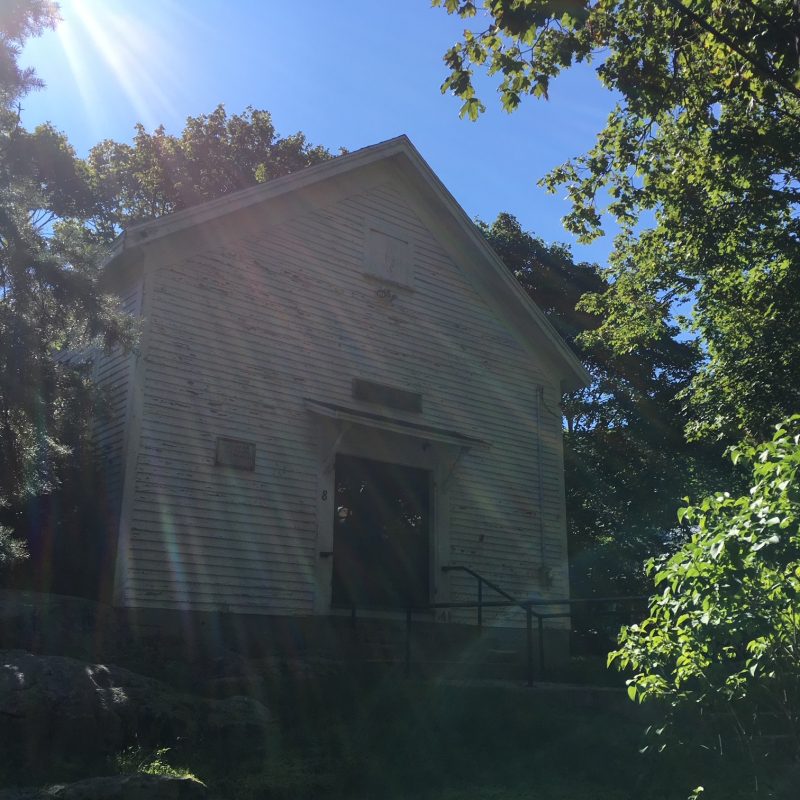 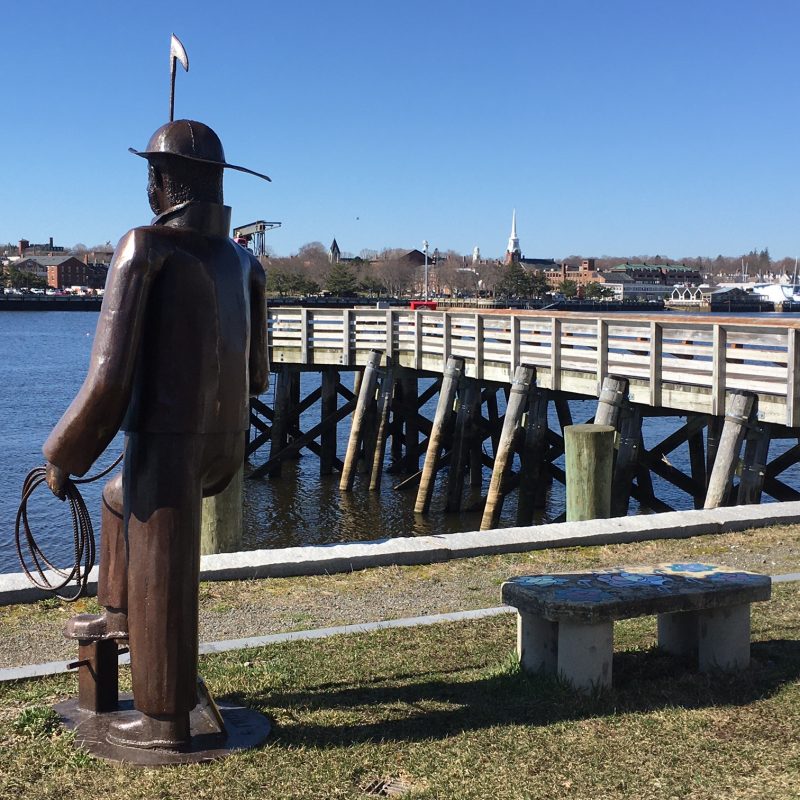 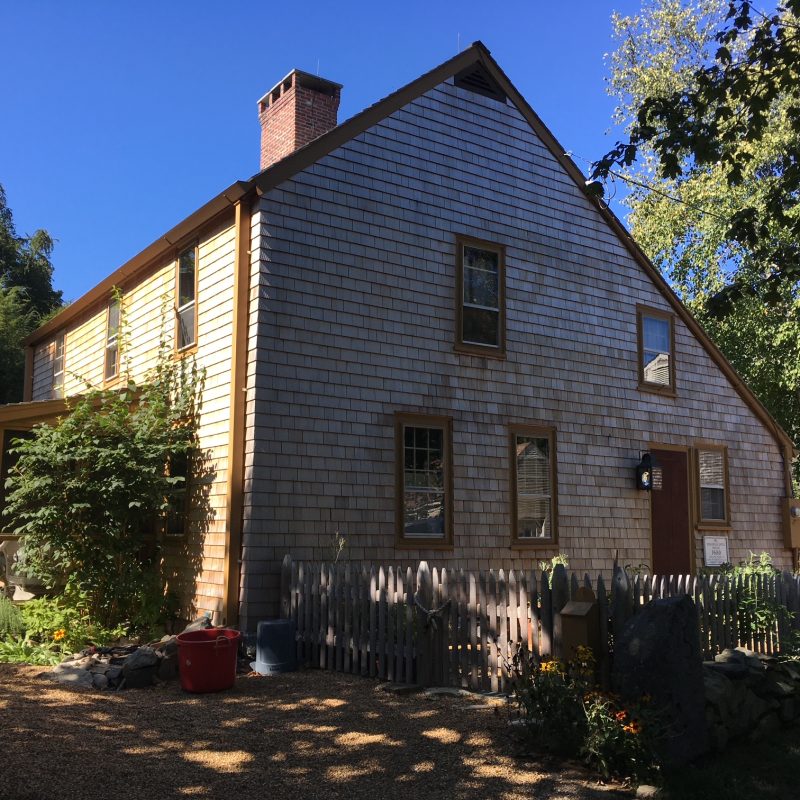