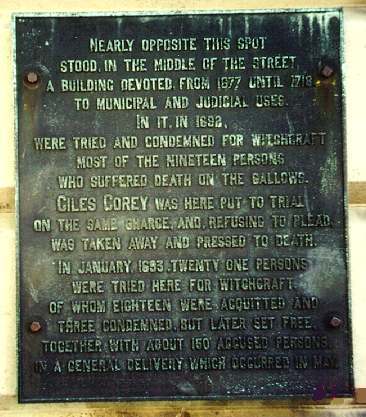 In 1692, the Salem Courthouse was on the second floor of the Town House, which also housed the Latin School on the first floor. The building stood in the middle of present-day Washington Street, just south of the intersection of present-day Lynde Street. It was here that the accused were tried and condemned to death.

More About Salem Courthouse in 1692, Site of

The Court of Oyer and Terminer (“to hear and determine”) was created by Governor William Phips in May of 1692. The court consisted of Chief Justice William Stoughton, plus eight successful merchants, landowners, and politicians of the day. They were: Jonathan Corwin, Bartholomew Gedney, John Hathorne, John Richards, Nathaniel Saltonstall, Peter Sargeant, Samuel Sewall, and Wait Winthrop.

No more executions took place after September 22. The Court of Oyer and Terminer was dissolved by Governor Phips and replaced by a Superior Court in December of 1692. Additional trials were held in the Salem Courthouse in 1693, as more than 50 accused were still languishing in jail. Twenty-six cases were dismissed without charges. Of the remaining, three were found guilty ­— Sarah Wardwell (widow of Samuel Wardwell, executed in September), Betty Johnson, and Mary Post — and the rest were found not guilty. In the end, the three convicted women were reprieved by Phips, which greatly angered Chief Justice William Stoughton. He would have liked to see them hang.

Additional note: The building where the witch trials occurred was the second Town House erected in Salem, located in the middle of Washington Street from 1677 until 1740. A third Town House was built about 1720, next to and west of the First Church on Essex Street. According to Salem historian Joseph Felt, “Credible tradition relates that the building connected with such prominent events stood over twenty years after its successor was erected. The lower part of it served for a school, while the floor of the old court above was mostly taken up, except where the seats of the judges and juries were located. Here the boys would sometimes collect before master came, and play over the scene, once acted there in dread reality, of trying witches.”

There is a marker on the outside of the Masonic Temple building at 70 Washington Street (on the west side of the street), noting the location of the Courthouse in 1692.