Samuel and Ruth Perley testified against accused witch Elizabeth How, claiming she bewitched their child to death.

More About Samuel and Ruth Perley Home, Site of

Living in Ipswich Farms, on what is today Linebrook Road and a short distance to the southwest of Elizabeth and James How, was the home of Elizabeth (Jackson) How’s principal accusers in 1692, Samuel and Ruth (Trumbull, also spelled Trumble) Perley.

When she was arrested on May 29, 1692 by Topsfield Constable Ephraim Wildes (son of fellow-accused witch Sarah Wildes), 55-year-old Elizabeth How learned her accusers were two girls she had never heard of – Mary Walcott and Abigail Williams. At How’s examination on May 31, Ann Putnam Jr. and Mary Warren joined in the fray; they too were previously unknown to How. All of the afflicted witnesses screamed and writhed and were so tormented, it was decided there was enough evidence to hold How for trial.

It was Goody How’s prior reputation as a witch that sealed her fate, largely based on accusations from the Perley family. In 1682, a decade before the Salem witch trials, Samuel and Ruth Perley’s young daughter Hannah fell ill, experiencing mysterious and unrelenting torments and fits. Many in the community believed she was bewitched by their neighbor, Elizabeth How, who was around 46 years old at the time and lived nearby with her blind husband, James How Jr., and their unmarried children.

In 1692, Samuel Perley testified, “…soon after a falling out that had been between James How and his wife and myself, my daughter told us that it was James How’s wife that afflicted her both night and day, sometimes complaining of being pricked with pins and sometimes falling down into dreadful fits … we went to several doctors and they told us that she was under an evil hand …. thus our daughter continuing about two or three years constantly affirming to the last that this Goody How now seized was the cause of her sorrows, and so pined away to skin and bone and ended her sorrowful life …”

After Hannah’s death in 1685, as historian Charles Upham put it, “Everything that happened amiss to anyone was laid at her [Elizabeth How’s] door.” In 1692, there was a litany of accusations from the previous decade, including from other Perley and How family members, several having to do with illness or death of livestock. Samuel Perley’s brother Timothy and his wife Deborah testified that their cows had been bewitched by How and wouldn’t give their usual quantity of milk for a time. John How, the brother of Elizabeth’s husband James also testified against Elizabeth.

Although there were numerous people who condemned Elizabeth, she also had her supporters, among them several neighbors and her 94-year-old father-in-law. She was also defended by two Rowley ministers, one of whom, Reverend Samuel Phillips, recounted that young Hannah Perley, when not having fits, denied that How was her tormentor. Phillips also revealed that it was Hannah’s brother who encouraged her to name  Goody How – “Say she is a witch,” he yelled from a window.

Another brother of Samuel Perley, Thomas, was a member of the Salem jury in 1692. He was among the twelve men who apologized in 1697 for their actions, signing his name to the document that read, in part, “… we justly fear that we were sadly deluded and mistaken, for which we are much disquieted and distressed in our minds, and do therefore humbly beg forgiveness … ”

The approximate location of Samuel and Ruth Perley’s home, in a wooded area beyond a small stone wall, was pointed out a few years ago by Tammy Goss, who did a significant amount of research about her neighborhood’s seventeenth century history. A short distance farther down the road, at 437 Linebrook Road, is a house marked “Allan Perley House, 1748,” this Perley being from a later generation of the family. Much of the land around this Ipswich Farms area once belonged to the Perleys, the patriarch of which was Allen Perley, who arrived in the New World from England in 1634, and was in Ipswich by 1635. His home was thought to have stood across the street from 437 Linebrook Road. 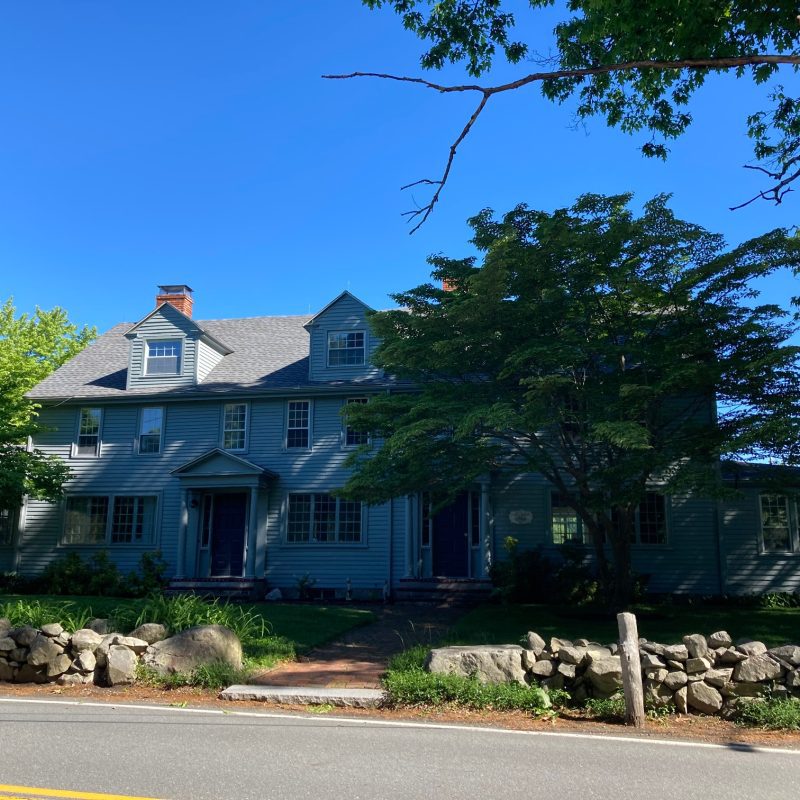