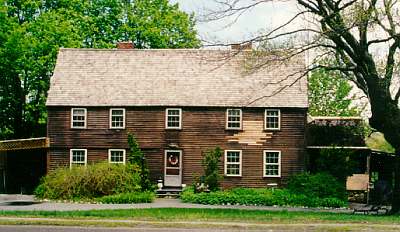 This house, constructed c. 1660, was the home of Sarah Osborne and her second husband Alexander in 1692. It originally stood near the intersection of Summer and Spring Streets. It is a private residence.

Sarah Osborne (alternate spellings Osborn, Osbourne, Osburn) and her second husband, Alexander, lived in this house in 1692. It was originally located on Spring Street (approximately where the driveway leading to the St. John’s Prep Memorial Gymnasium is today) and was moved to this location on Maple Street in 1914. It is a private residence today.

The ailing Sarah Osborne was one of the first three to be accused of witchcraft and was examined, along with Sarah Good and Tituba, from March 1-4 at the Salem Village meetinghouse. Four village leaders (Sgt. Thomas Putnam and his brother, Deacon Edward Putnam, Joseph Hutchinson, and Rebecca Nurse’s son-in-law Thomas Preston) filed a claim on behalf of the afflicted girls Betty Parris, Abigail Williams, Ann Putnam Jr., and Elizabeth Hubbard on February 29, which led to the arrest of the three women.

The four girls claimed Osborne’s specter pinched them, pricked them (Elizabeth Hubbard said she was stuck with knitting needles), and encouraged them to write in the devil’s book.

Osborne was a perfect target for a witch hunt. She was an ill and fearful woman in her late 40s, possibly suffering from depression, who was an outcast and subject of gossip partly because her second husband had formerly been her indentured servant. As if this were not enough, it was suspected that they had lived as husband and wife prior to marriage. This was a scandal.

In her examination, Osborne said she was “more like to be bewitched than that she was a witch.” In her answers to the magistrates, it seems Osborne was struggling with an anxiety that many felt in 17th century New England, as she confessed that she, “one time in her sleep either saw or dreamed that she saw a thing like an Indian, all black, which did pinch her in the neck and pulled her by the back of the head to the door of the house.” Women and children who lived on the frontier in 1692 feared Native American attack which likely resulted in nightmares for many.

After Osborne’s examination, Tituba, Reverend Samuel Parris’ slave, was questioned. Initially claiming innocence, Tituba eventually confessed to witchcraft (possibly after beatings from her owner Parris) and regaled the crowd with a tale of a ride on a pole with Sarah Osborne and Sarah Good. She said that both women had encouraged her to cut off her own head, at which point Ann Putnam Jr. chimed in: Osborne and Good’s specters had threatened to send Tituba to cut off her head as well, if she would not do it herself.

Osborne was also questioned about her attendance at meeting. It was a long time since she had been seen at church, but the truth was, she had been ill and bedridden. According to notes taken during her examination, her husband and others said that she had not been at meeting for a year and two months.

Another mark against Osborne was an ongoing disagreement with the Putnam family. Sarah’s first husband was Robert Prince. They were married in 1662 and lived on a 150-acre farm in Salem Village, where their closest neighbors were Prince’s sister Rebecca and her husband, Captain John Putnam (the uncle of Thomas Putnam Jr.) The Princes had two sons.

When Prince died in 1674, he named as the executors of his estate his two brothers-in-law: neighbor Captain John Putnam and Lt. Thomas Putnam (father of Thomas Putnam Jr.). His land was left to Sarah to be held in trust until their sons were of age. In 1677, Sarah married Alexander Osborne, whose indenture she had previously purchased for £15. The Osbornes went to court to try to break the trust and gain control of the property. Attempting to disinherit her two boys did not endear Sarah to the Putnams or other villagers. Her property dispute with her sons was ongoing at the time of the trials, and would not be settled until long after her death.

Sarah Osborne, Sarah Good,  and Tituba were held for trial. Sarah Osborne was sent to Boston jail on March 7. Two days later, Osborne was put in shackles, since the afflicted claimed they were still tormented by the women’s specters. Osborne became the first victim of the Salem witchcraft hysteria, succumbing to the poor jail conditions. We know her death date, May 10, by a bill submitted by Boston jailer John Arnold: “To the keeping of Sarah Osburn, from the 7th of March to the 10th of May, when she died, being nine weeks and two days, £1. 3s 5d.”

Little is known about Sarah Osborne’s past. According to Clarence Almon Torrey’s New England Marriages Prior to 1700, published in 1860-62 and considered one of the greatest genealogical manuscripts of the twentieth century, she was born Sarah Warren in Watertown, MA. Several sources list her birthdate as circa 1643. Her parents names are unknown.

Additional note: Alexander Osborne remarried after the death of Sarah. His new wife was Ruth (née Cantlebury or Canterbury), the widow of William Sibley, who was the brother of Samuel Sibley (whose wife Mary suggested the “witch cake”) and Mary Sibley, first wife of Jonathan Alcott. The couple joined the church and were respected members of the community. In 1720, years after Alexander’s death, Sarah’s two sons brought suit claiming they had been ill-treated by Alexander and forced to sign away their property rights.

273 Maple Street, opposite Gorman Road. Private Residence. Not open to the public.

The driveway that leads to the Memorial Auditorium at St. John’s Prep is located at approximately 55 Spring Street. This was the original location of the house where Sarah and Alexander Osborne lived in 1692.

Another view of the driveway to the St. John’s Prep gymnasium, looking across Spring Street. 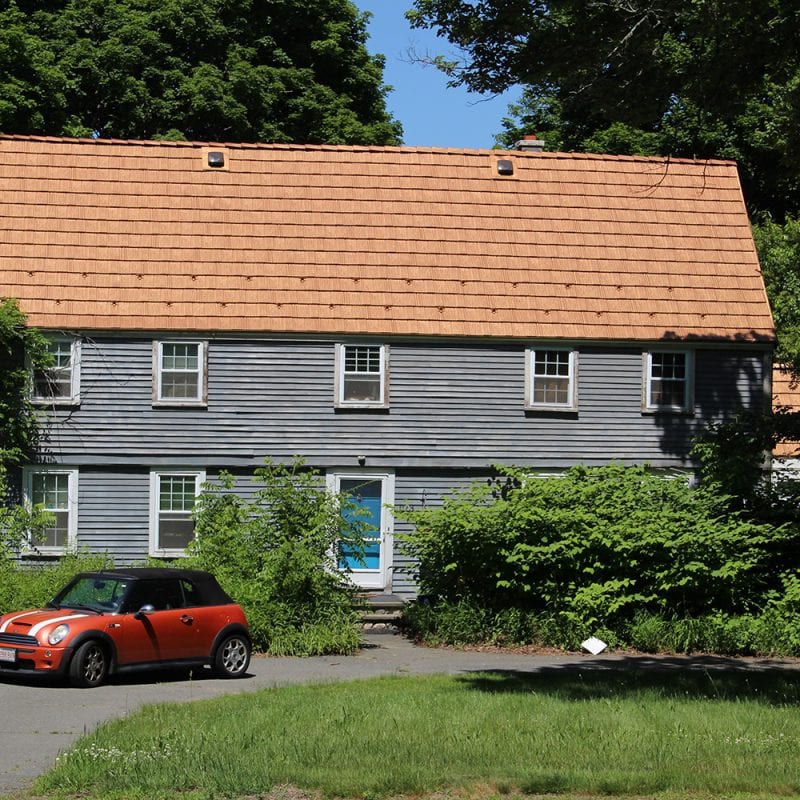