Set back from Washington Street is the beautiful Federal style home built for the successful merchant Joshua Ward in 1784. The property has older connections that date back to the witchcraft trials. Today, visitors can still see ragged stones along the building’s foundation, which are all that remain of the 1692 home of George Corwin.

Twenty-five-year-old George Corwin was the High Sheriff during the witchcraft trials of 1692. This important position may have been obtained through nepotism – he was the nephew of both Judge Jonathan Corwin and Judge Wait Winthrop, as well as the son-in-law of Judge Bartholomew Gedney. In his role, Sheriff Corwin escorted the condemned by cart from prison to the execution site at Proctor’s Ledge on Gallows Hill. As required by law, Corwin would also confiscate the property of condemned prisoners —not land, but belongings such as livestock, hay, apples, and corn, and household goods such as kettles, pewter, furniture, and jewelry. It is a common misconception that witchcraft accusations were part of a deliberate attempt to gain the land of neighbors or fellow community members. At this time, English law allowed the seizure of a felon’s possessions, but this did not extend to their real estate. The worldly possessions of the married women who were convicted were considered the property of their husbands. As such, there was nothing to confiscate from the condemned married women, but the possessions of the condemned men and widows were allowed to be confiscated. These domestic goods were supposed to be inventoried and stored, to help pay the felon’s jail costs and support his family. However, it is known that Sheriff Corwin sold off some of John Proctor’s livestock and slaughtered and salted the rest, for shipping to the West Indies.

Today, the Joshua Ward House is a luxury boutique hotel called The Merchant.

Within his duties as High Sheriff, George Corwin also oversaw the gruesome death of Giles Corey. After refusing to comply with court procedure, Giles Corey was condemned to peine forte et dure. This extreme measure entailed laying the 81 year old Corey on his back, and piling heavier and heavier weights on a plank across his body. According to some reports, when Corey’s tongue lolled out of his mouth as a result of the weight on his chest, Corwin callously used his walking stick to poke the tongue back in – a disturbing image. Given the shocking nature of his demise, as time has gone on a legend has grown surrounding Corey’s death. This tale claims with his last breath Giles Corey cursed Sheriff Corwin and the town of Salem. There is no evidence to suggest Corey ever uttered these words, but this has become a popular legend surrounding the Sheriff.

Another myth surrounding George Corwin involves Philip English, the wealthiest merchant in Salem, who, along with his wife Mary, was accused of witchcraft. English’s wealth was such that he was able to  flee to New York City, where he remained until the witchcraft accusations passed. Upon his return to Salem, he discovered that George Corwin (along with some of English’s own neighbors) had confiscated his belongings – from his home, warehouses, wharves, and shop. Furious at the degradation of his life’s work, English sued Corwin repeatedly, for years, in an effort to regain his property. Ultimately, Corwin died before English had obtained any satisfaction from his legal efforts. In a wild and desperate measure, English went so far as to threaten to steal Corwin’s corpse and hold it for ransom. While most scholars believe this theft did not actually happen, legends grew. This tale is often retold, claiming that English DID snatch the body, or that Corwin was buried in his own basement for years, for fear he would be stolen from his grave. In truth, Corwin was interred in the Broad Street Cemetery.

Additional note: There are numerous myths around George Corwin, including the idea that he tortured prisoners in his basement, and that he, or his victims, haunt the site to this day. There is no evidence to substantiate the claim that Corwin was torturing prisoners, nor that this was taking place within his own home. However, today popular tradition maintains that the Joshua Ward House is the most haunted house in Salem.

Ragged stones along the foundation are all that remain of the home of Sheriff George Corwin. 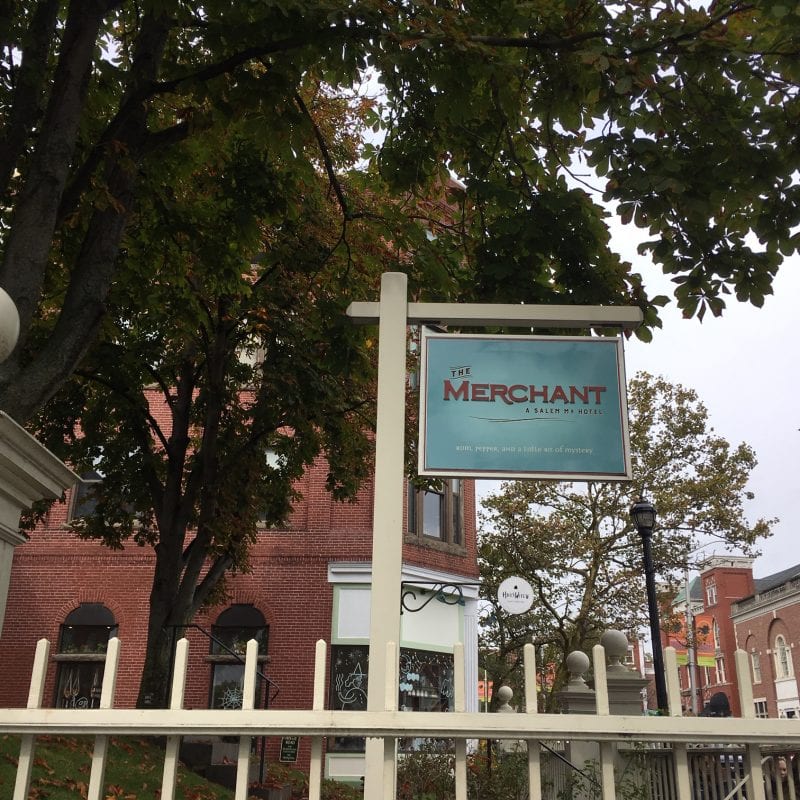