The South Parish Church and its burial grounds were established in 1710. The church was officially founded on October 17, 1711, the same day minister Samuel Phillips was ordained.

The center of the original town of Andover was on the northeast side, where the meeting house and burying ground were located (see North Andover for more information). By the early 1700s, families living to the south and west no longer wanted to travel the long distance to attend meeting, and so a South Parish Church and “burying-yard” were established in 1710 (followed by a West Parish Church and burying ground in 1826).  The official date of the church’s founding was October 17, 1711, the same day Reverend Samuel Phillips was ordained as minister. That was the same date many innocent people accused of witchcraft in 1692 were cleared of the charges when Governor Joseph Dudley signed a reversal of Attainder, an interesting fact pointed out by the historian of the South Church in Andover, Char Lyons. Was that date chosen deliberately by the church? It seems likely.

According to the South Parish Burial Grounds website, “The grounds for the meeting house, parsonage, school, and burial grounds were given by John Abbot, the first Deacon, and son of original Andover settler, George Abbot. It is believed that the current grounds were the burial site of the Abbot family.”

George Abbot was married to Hannah (Chandler), whose brother Thomas Chandler testified against Samuel Wardwell in 1692 and whose niece Phebe Chandler (daughter of Hannah’s brother William) testified against Martha Carrier in 1692. George and Hannah lived almost directly across the street from the South Parish Church, in a house that was also a fortified garrison, built in 1673-75. Their son Benjamin was also an accuser of Martha Carrier in 1692.

Hannah remarried in 1690, to her stepbrother, Reverend Francis Dane. In 1843, descendants of George and Hannah Abbot erected a memorial in the South Parish Burial Grounds. The cemetery is filled with Abbot(t) descendants (the family name was sometimes spelled with two ‘t’s” after 1823), as well as many descendants of the founding families of Andover, among them Chandlers, Fosters, Wardwells, Lovejoys, and Holts. For further information, please visit: southchurch.com/south-parish-burial-grounds-2/

41 Central Street is the address of South Church and its cemetery. The George Abbot Homestead, which was also the garrison house, stood at 56 Central Street.

The original footprint of the South Parish meeting house is part of South Church today.

The memorial to George and Hannah Abbot, erected by descendants in 1843. 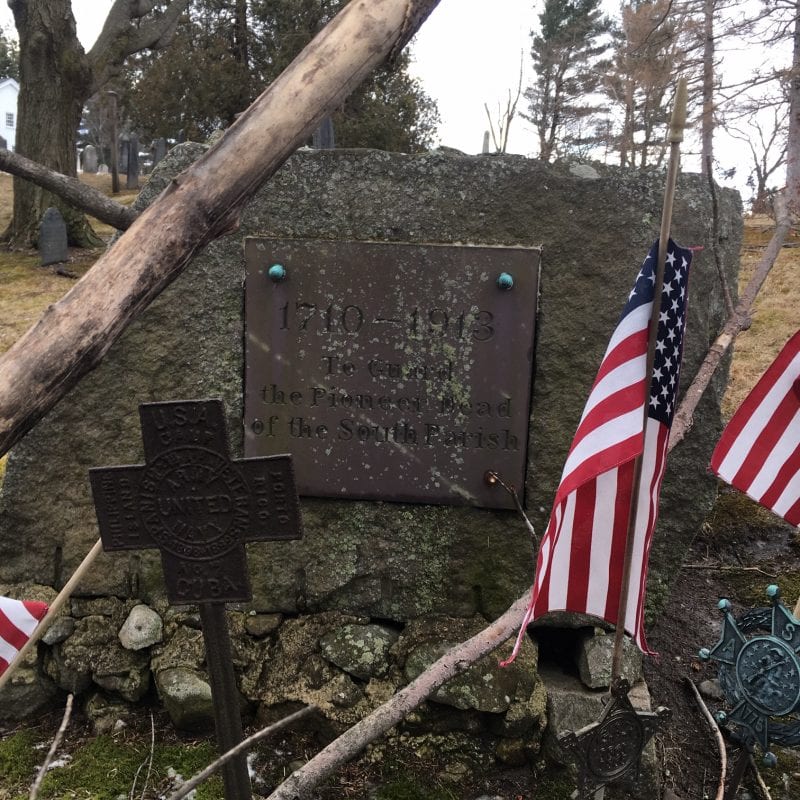