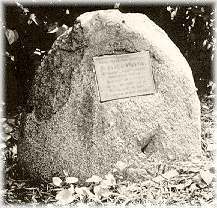 Susannah (alternate spelling Susanna) Martin’s house stood near this site in 1692.  She was tried and convicted on June 29 and sentenced to death. She was hanged on July 19 on Proctor’s Ledge at Gallows Hill.

On April 30 of that year, Thomas Putnam and Jonathan Walcott swore a complaint against Goody Martin. Martin was accused by Mary Walcott, Abigail Williams, Ann Putnam Jr., and Mercy Lewis. Amesbury constable Orlando Bagley escorted Goody Martin the 20 miles to Salem Village, where she was examined on May 2, and subsequently jailed in Boston. On May 31, she was transported from Boston Jail to Salem Town to await her trial. She was tried and convicted on June 29 and sentenced to death. She was hanged on July 19 on Proctor’s Ledge at Gallows Hill.

Cotton Mather, who observed her trial, called Susannah Martin one of the most “impudent, Scurrilous, wicked creatures in the world.” The marker, however, states that she was an honest, hard-working Christian woman, and was “a Martyr of Superstition.”

How did a widow of approximately 70 who lived some 20 miles from Salem Village get caught up in the witchcraft accusations? By all reports, her reputation made her a prime target. Long suspected of practicing witchcraft, and a victim of decades of gossip, she was no stranger to altercations with her neighbors.

Born Susannah North in England in 1621, she moved with her family to Salisbury, MA when she was 18. In 1646, at the age of 25, she married widower George Martin and they lived west of the Powow River. In 1654, the area separated from Salisbury and became Amesbury, Massachusetts. The Martins were two of the earliest residents of Amesbury, which would be officially incorporated in 1668. In total, the couple had eight children. Susannah was left a poor widow in 1686 when George Martin died.

Forthright and argumentative, Goody Martin’s past included six unsuccessful lawsuits to inherit her father’s estate. She had appeared in court as a defendant numerous times for a variety of offenses, including calling one neighbor a liar and a thief. She was accused of witchcraft on two occasions before 1692, with the charges eventually dropped.

Thirty years of gossip and accusations had hardened Martin. She laughed at her accusers during her examination, treating them with contempt. Skeptical of the witch hunt, when asked if she had compassion for the afflicted, clear-eyed Martin replied, “No. I have none.”

At her June trial, at least nine (some suggest as many as 24) neighbors traveled to Salem to testify against Martin. Among the personal grievances harbored over the years were claims that she had caused one man’s oxen to drown themselves, her specter had stalked a farm hand, she had bitten another man’s hand, she had driven a neighbor mad, and she had been seen at witch meetings. Her reply? “I have led a most virtuous and holy life.”

“Let Goody Martin rest in peace, I never knew her harm a fly.”

It is thought that when the Amesbury-Salisbury section of Route 495 was completed in 1967, it likely covered the location of the George and Susannah Martin homestead. In fact, today, 495 splits Martin Road in two, with North Martin Road to the northwest and South Martin Road to the southeast. According to Joseph Merrill in his 1880 work, History of Amesbury, “…[George Martin] removed to the west side of Ring’s hill on the old Hunt’s Lane, where he lived until his death.”

The marker for Susannah Martin is located at the end of North Martin Road, which intersects with Route 110 approximately one-half mile west of the intersection of Routes 110 and 150.

View down South Martin Road toward Hunt's Lane and, beyond, Route 495 North. 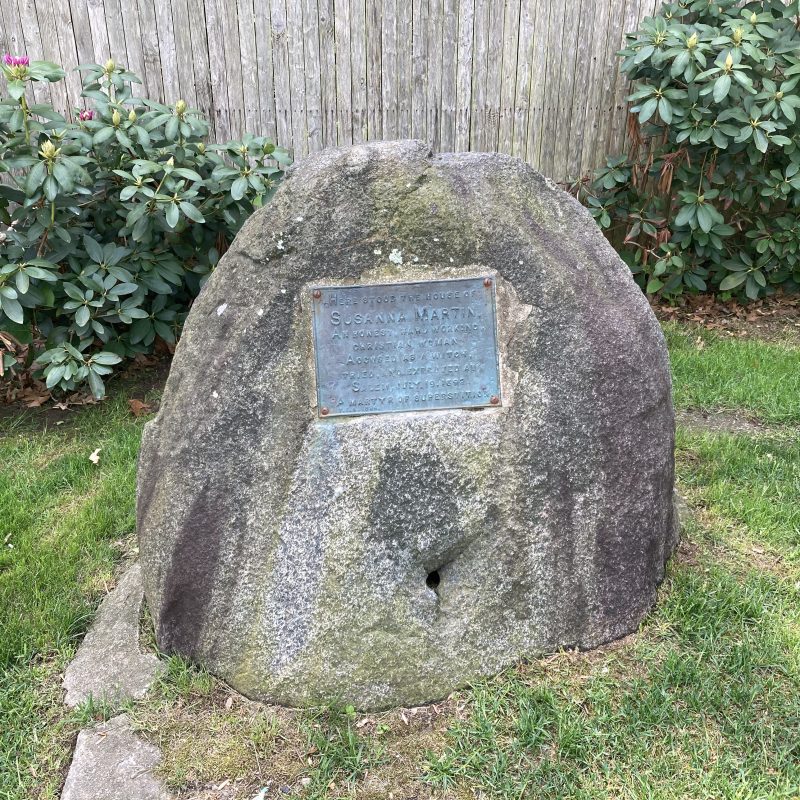