Boston was founded in 1630. In 1692, many people involved in the witchcraft delusion lived here, including judges, ministers, accusers, accused, and skeptics.

More About Welcome to Boston

Boston is the capital of the State of Massachusetts, located on the Atlantic Ocean on the east coast of the United States. Its population is the largest in the state and in New England, totaling 695,000 people in 2018. It is the only state capital in the contiguous United States with an ocean shoreline.

Before the English arrived in the 1600s, the Massachusett natives, who called what we know as Boston Harbor today “Quonehassit,” spent the summers on the harbor islands, and moved inland in the winter. European traders brought disease to the New World in 1617-19, wiping out a majority of the native population along the Massachusetts coast.

In 1630, John Winthrop and about one thousand Puritans left England, with a charter in hand authorizing them, as the Massachusetts Bay Colony, to found a religious commonwealth. It was on the flagship Arbella that it is believed Winthrop sermonized, saying, “wee must consider that wee shall be as a Citty upon a Hill, the eies of all people are upon us.” Initially landing in Salem, and then settling in an area they called Charlestown, in honor of their English king, they soon moved to the Shawmut Peninsula and founded Boston, named after Boston, Lincolnshire, England.  The Massachusetts Bay Colony was England’s first chartered colony that was not ruled by men who lived in England. Massachusetts would consistently resist the idea of the King having a say in their governance.

Originally, to the west of the harbor, were three great hills. The settlers later called them Copp’s Hill (where the North End is today), Fort Hill (where the Financial district is today) and a three-summited hill called Trimountain. The three summits of Trimountain were Beacon Hill, Mount Vernon (at today’s Louisburg Square) and Pemberton Hill (at today’s Pemberton Square). Of these, only Beacon Hill remains, and at a much shorter height than when the colonists first saw it.

Today, one sixth of Boston is built on reclaimed land. The hills were cut down to create more livable space – the Shawmut Peninsula was once less than 800 acres, and today is more than double that size. Land reclamation created the Boston neighborhoods of Back Bay, the South End, and Fenway-Kenmore.

Boston became a thriving town, a center of trade and government. It was the largest town in British America until it was surpassed in size by Philadelphia in the mid-1700s, and surpassed in wealth by both Philadelphia and New York in the same period.

Known for their fierce independence and revolutionary spirit, the people of Boston took part in, or witnessed, several significant events leading up to and during the Revolutionary War including the Boston Massacre in 1770, the Boston Tea Party in 1773, the Battle of Bunker Hill (which actually took place on Breed’s Hill) in 1775, and the Siege of Boston in 1775-6, during which Boston’s population dropped by two thirds. Today, the number one tourist attraction in Massachusetts is the Boston Freedom Trail, on which visitors from around the world learn about these key events in America’s history.

Boston remained a major international seaport after the Revolutionary War until shortly after the War of 1812, when it turned to manufacturing and helped spark the industrial revolution with factories created in nearby towns like Waltham and Lowell.

Boston was incorporated as a city in 1822. It also became a center for the abolitionist movement, beginning in the 1830s. After the Civil War, with land reclamation projects underway, Boston built cultural institutions like the Museum of Fine Arts, the Museum of Comparative Zoology (now the Museum of Science), and a new building for the Boston Public Library. Landscape architect Frederick Law Olmstead created Boston’s “Emerald Necklace” park system, beginning in 1878. These connected green spaces, covering 1,100 acres, include Boston Common, the Boston Public Garden, Back Bay Fens, Jamaica Pond, Arnold Arboretum, and Franklin Park.

Boston is a city of firsts, among them: Boston Common was America’s first public park, established on land purchased from early settler and Anglican priest William Blackstone (1634); Boston Latin School was the first public school (1635); Boston Light was the country’s first lighthouse. Originally built on Little Brewster Island in Boston Harbor in 1716, it was blown up by the British as they left Boston in 1776, rebuilt in 1783, and today is the oldest and the last manned lighthouse in the country; the Massachusetts Historical Society is the first organization dedicated to preserving history (1791); Boston Public Library is the country’s first free library (1852) and the Tremont Street Subway was the country’s first subway (1897).

Today, Boston is the sixth largest economy in the United States. It is a center for healthcare, higher education, technology companies, financial institutions, tourism, and cultural institutions.

No one from Boston was executed during the witchcraft hysteria of 1692. Several were accused, among them Captain John Alden (son of John and Priscilla Alden, original settlers of Plymouth who came to America on the Mayflower); Widow Margaret Thacher, mother-in-law of Salem magistrate Jonathan Corwin; and Lady Mary Phips, wife of Governor William Phips.

Boston was the home of five of the nine judges who sat on the Court of Oyer and Terminer: Chief Justice William Stoughton, Samuel Sewall, Waitstill Winthrop, Peter Sargeant, and John Richards. The General Court was in Boston. Governor William Phips and Lieutenant Governor Thomas Danforth lived in Boston.

Ministers Increase and Cotton Mather, Samuel Willard, James Allen, and Joshua Moody lived in Boston and preached in Boston churches. Across the Charles River in Cambridge was Harvard College, where most of New England’s 17th century ministers were schooled.

Boston Jail was one of the four main prisons where those accused of witchcraft were held (the others were in Salem, Ipswich, and Cambridge).

Philip English, the wealthiest merchant in Salem, fled to a friend’s Boston house to hide when English was accused of witchcraft.

Before the witchcraft hysteria of 1692, Goody Glover was hanged as a witch on Boston Common in 1688. She was the last person to be hanged for that crime in Boston. Even as the 1692 turmoil was dying down, Boston servant Mercy Short, an accuser during the witchcraft hysteria, continued to suffer afflictions into 1693, which Reverend Cotton Mather observed and wrote about in his paper “A Brand Pluck’d out of the Burning.”

The Boston State House was designed by architect Charles Bulfinch and completed in 1798.

This statue of Paul Revere stands near the Old North Church. Dedicated in 1940, it was sculpted by Cyrus Edwin Dallin.

Fenway Park, home to the Boston Red Sox since 1912. 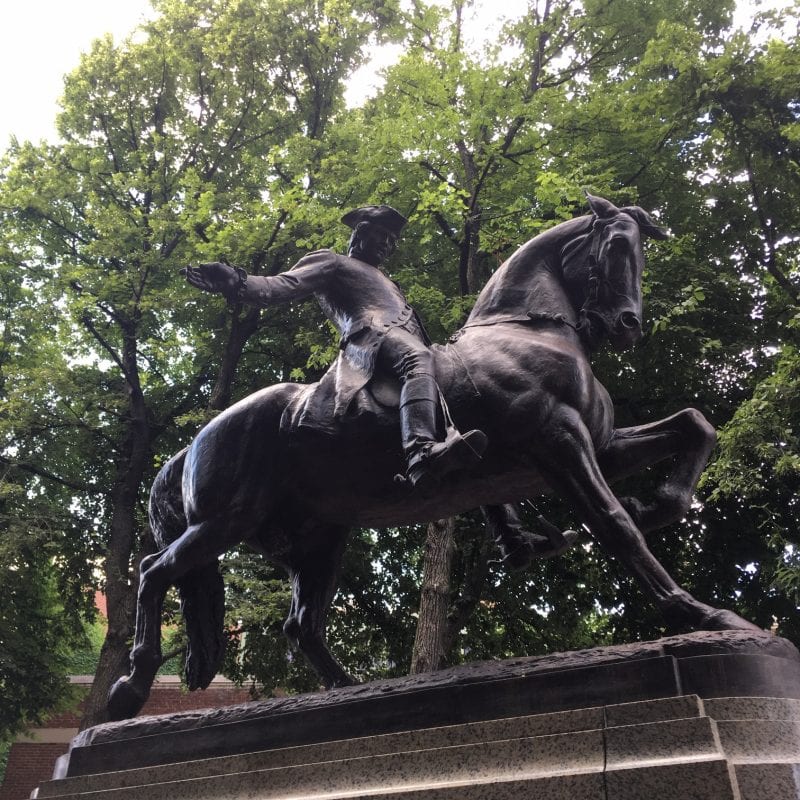