Founded in 1640 and officially purchased from the Native American Pentuckets in 1642, this northern Massachusetts town was originally called Pentucket. The name was changed to Haverhill in honor of the English home of Haverhill’s first pastor, Reverend John Ward. The original settlement on the Merrimack River was located near what is today the Linwood Cemetery and Crematory. Haverhill, originally incorporated as a town, was incorporated as a city in 1870. It evolved from a farming community, to a mill town, to a leading center of shoe manufacturing from the 1830s to the 1930s. Today it is home to approximately 63,000 residents

More About Welcome to Haverhill

It has been speculated that Nathaniel Saltonstall’s recusal from the witchcraft trails influenced the Haverhill community, preventing the witchcraft accusations from escalating the way they did in the neighboring town of Andover.

Nevertheless, at least five Haverhill women were accused of witchcraft, though none were executed.

Martha Emerson was brought by Haverhill Constable William Starling to Salem Town for examination on July 23. Emerson was the daughter of Billerica folk-healer Roger Toothaker and Mary Toothaker. Goodwife Toothaker’s sister was Martha Carrier, who would be accused, convicted, and executed on August 19. Martha Emerson was accused of tormenting Mary Warren and Mary Lacy Jr., as well as supposedly harnessing a man with an enchanted bridle. She denied both charges. When pressed about her use of counter-magic, taught to her by her father, Roger Toothaker, Goody Emerson confessed to that, and more. She implicated her aunt, Martha Carrier, and also Mary Green of Haverhill. Jailed for hurting Mary Warren, Emerson then changed her mind and professed innocence. She had thought that confessing would keep her free, but she remained in jail. On January 10, 1693, her case was declared ignoramus, meaning “we are uninformed,” or “without sufficient evidence.”

On July 30, Constable Starling escorted Mary Green of Haverhill to Salem Town for questioning, accompanied by Green’s husband, Peter. Little is known of Goody Green’s examination, except that she was said to have owned a real, or spectral, pig. On August 2, Goodwife Green’s brother-in-law, John Shepard of Rowley, broke her out of the Ipswich Jail where she had been held. However, she was found and returned. On August 23, Goody Green escaped again, only to be recaptured by Ipswich Constable William Baker a day later and once again returned to jail. On December 13, Green was among the petitioners to the governor, asking to be released. She feared she would not survive the winter in jail. Green obtained her release on December 16 after a £200 bond was posted. Her husband is known to have petitioned for restitution for the 19 weeks of prison charges and the cost of bond in 1710, for which he received payment in 1712.

Haverhill’s Mary Clark was examined on August 4 in Salem Town, brought in by Constable Starling. She, or her specter, was accused of tormenting Mary Walcott, Ann Putnam Jr. and Timothy Swan. Putnam said that Clark had afflicted her by pinching, choking and striking her. It was claimed her specter had been seen eating and drinking at a witch meeting. Clark denied the charges. She was jailed but the records don’t indicate the date of her release. She was thought to have been living in Haverhill in 1714.

An arrest warrant was issued for Frances Hutchins and Ruth Wilford on August 18, after a complaint issued by Timothy Swan, Mary Walcott, and Ann Putnam Jr. A day later, Constable Starling arrested Hutchins, a wealthy widow who had managed her husband’s business affairs in his last years, and brought her to Salem Town. Her arrival was overshadowed by the greater excitement of yet another hanging – five were executed on Proctor’s Ledge that day. Constable Starling was unable to locate Wilford until the 20th, but ultimately escorted her to Salem Town on the 22nd for her examination. On December 21, the Widow Hutchins’ son Samuel, who represented Haverhill at the General Court in Boston, posted a £200 bond to free his mother from jail. Records on Wilford’s release have not yet been found. 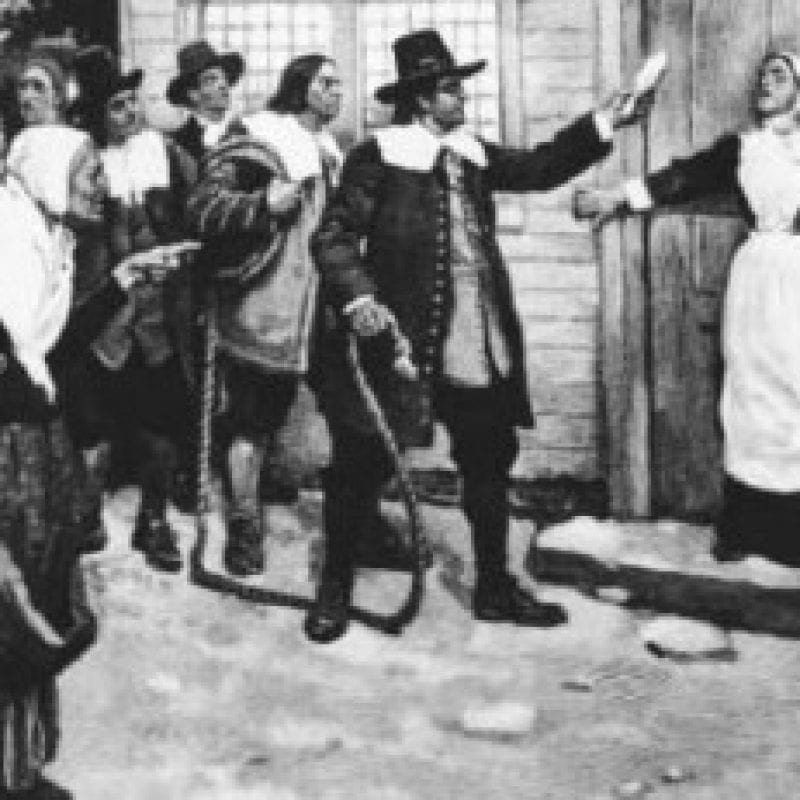