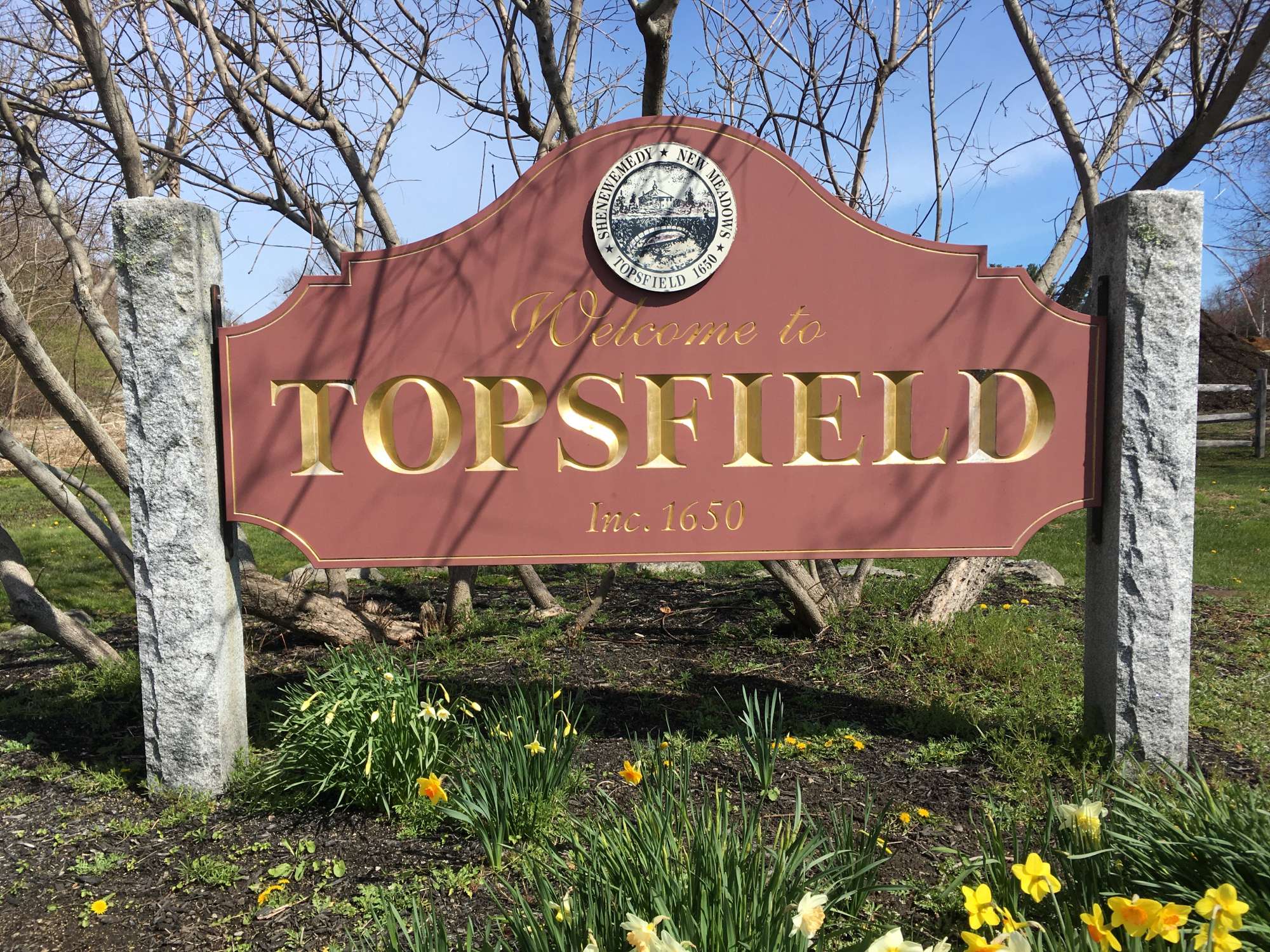 Topsfield, Massachusetts, about ten miles northwest of Salem, was incorporated in 1650. Three women from the Topsfield area were executed for witchcraft in 1692.

More About Welcome to Topsfield

From approximately 1639 to 1643, the first English settlers arrived in Topsfield, initially calling the area, located about ten miles northwest of Salem, “New Meadows.” It was, at first, a precinct of nearby Ipswich. In 1648, New Meadows was renamed Topsfield, likely after the English parish of “Toppesfield” in Essex. The town of Topsfield was incorporated in 1650. It was a farming community and remains fairly rural today, a desirable suburb of Boston.

The Ipswich River, called the Agawam by the native people who lived in the area, runs for more than seven miles along and through Topsfield, denoting the town’s border in some spots. Both the area along the river and the native people were also known as Agawam. It was Agawam Sagamore Masconomet who sold native land (also encompassing Ipswich, “from the Merrimack to the Chebacco Rivers and westward to the land of the Massachusetts tribe,” according to George Francis Dow’s History of Topsfield, Massachusetts), to John Winthrop in 1638, for a mere £20. Topsfield contains some of the highest points in Essex County, among them Peirce Farm at Witch Hill. Today the Newburyport Turnpike (Route 1) runs through the center of Topsfield from north to south. Topsfield is bordered to the north by Ipswich, to the east by Hamilton, to the south by Wenham and Danvers, and to the west by Middleton and Boxford. Its population in 2018 was just over 6600 residents.

Topsfield was originally an agricultural community whose principal crop was corn. The first gristmill was established by Francis Peabody in 1666, near the intersection of today’s Route 1 and Ipswich Road. The first sawmill followed by 1671. Gristmills on Pye Brook and Howlett Brook served the town for many years, as did the Averell family’s sawmill on Mile Brook. Topsfield was heavily wooded and the use of timber was closely regulated. Other occupations that grew in the area were coopers, blacksmiths, tanners, carpenters, and shoemakers. The latter industry began in home workshops, where it remained until the 1850s, before the industry moved into factories. It is said that, at its peak, Topsfield shipped 200,000 pairs of shoes annually.

The oldest agricultural fair in America is the Topsfield Fair, whose fairgrounds are across from the Essex County Co-op on Route 1. (A portion of the co-op’s property was once the 17th century homestead of Isaac and Mary Easty – she was one of nineteen accused “witches” executed by hanging in 1692.) It was in 1818 that the first meeting took place to establish the Essex County Agricultural Society, many of whose members were “gentlemen farmers.” The first Cattle Show took place in 1820, a one-day event. As the years went on, other exhibits were added: fruits and flowers in 1835, bees and honey in 1841, mowing machines in 1855.The agricultural fair exhibited in different Essex County towns year after year. In 1910 the Essex Agricultural Society’s annual fair found a permanent home on the 150-acre farm that Dr. John Goodhue Treadwell had willed to the Society in 1858, and the Topsfield Fair has taken place there ever since.

In 1680, militias of Topsfield, Rowley, Newbury, Bradford, Amesbury, Salisbury, Haverhill, and Andover were gathered in one regiment under the command of Major Nathanial Saltonstall of Haverhill, who would later briefly serve on the Court of Oyer and Terminer in 1692.

Militias would drill on the training field (the town common today is part of the old field). Topsfield residents took part in King Philip’s War (1675-1678), the French and Indian Wars (1754-1763), and played a significant role in the Revolutionary War. According to George Francis Dow, three hundred men (of a population of 800) enlisted, and during the lead-up to the Revolutionary War, Topsfield residents spoke out against the Stamp Act, the British occupation of Boston, and the Boston Massacre. They agreed not to buy or sell British goods, and supported the actions of the Boston Tea Party. In April of 1775, sixty-three men responded to the alarm and marched sixty miles to and from Lexington, leaving their ploughs and hoes abandoned in their fields. Topsfield men also took part in the Battle of Bunker Hill. Of the one hundred thirty-two Topsfield men who served in the Civil War, twenty-two died, making it the town’s deadliest war. Topsfield residents have also fought in every war of the twentieth century. Veterans are honored at the annual Memorial Day parade through the center of town.

Five generations of the ancestors of Joseph Smith Jr., founder of the Mormon Church, lived in Topsfield, including his father Joseph Smith Sr., born in 1781. The Smith Homestead is noted with a marker on Boardman Lane. There is also a large Smith family plot in the Pine Grove Cemetery.

Three women from the Topsfield area who were executed in 1692 are memorialized on a stone erected on the Topsfield Common in 1992  – Mary Easty (alternate spellings Esty, Eastey), who was one of three daughters from Topsfield’s Towne family to be accused. Her older sister Rebecca Nurse was also executed, while her younger sister Sarah Cloyce, although accused and jailed, escaped the hangman’s noose. Both Rebecca and Sarah lived in Salem Village (Danvers today) in 1692. Topsfield’s Sarah Wildes was also executed, as was Elizabeth How (alternate spelling Howe). The latter lived on the border of Topsfield and Ipswich. The site of her home is officially in Ipswich, so information about Elizabeth How will appear in Ipswich on our Online Sites Tour.

Another family who lived within the boundaries of Topsfield in 1692 – William Hobbs, his 14-year-old daughter Abigail, and his second wife Deliverance (Abigail’s stepmother) – were all accused of witchcraft. Today, the site of their home lies within the boundaries of Middleton, and so information about the Hobbs family will appear there on our Online Sites Tour.

Our Topsfield tour is lovingly dedicated to the memory of Alison D’Amario, Director of Education Emeritus of the Salem Witch Museum.

The Parson Capen House, built in 1683

A view of Mile Brook, near the intersection of Route 1 and Ipswich Road. The town's first mills were established in this area in the mid-late 1600s.

The Smith Homestead marker. The current house, built in 1876, is a private residence, not open to the public. 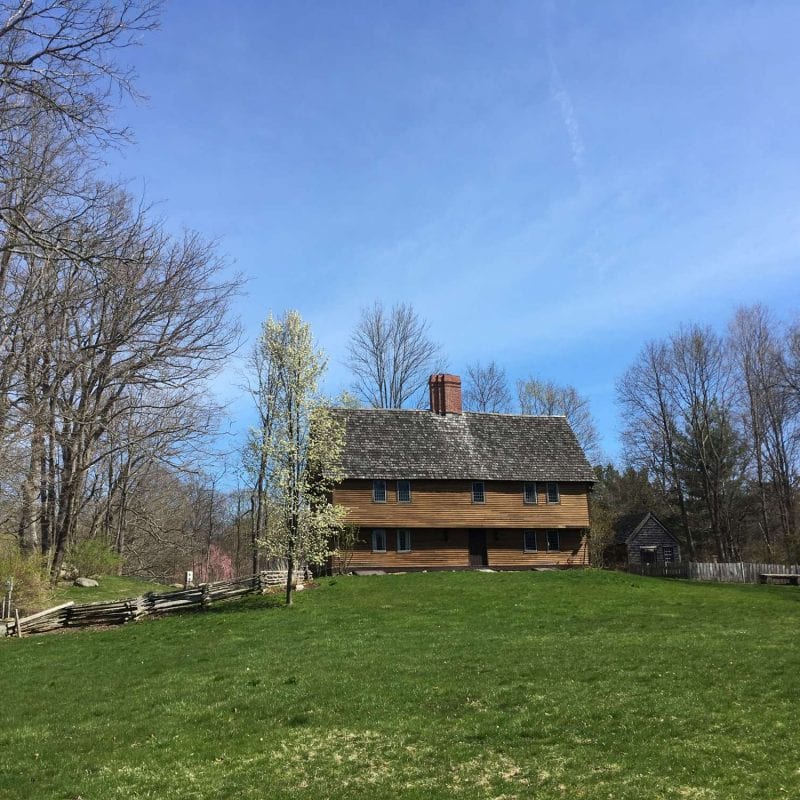 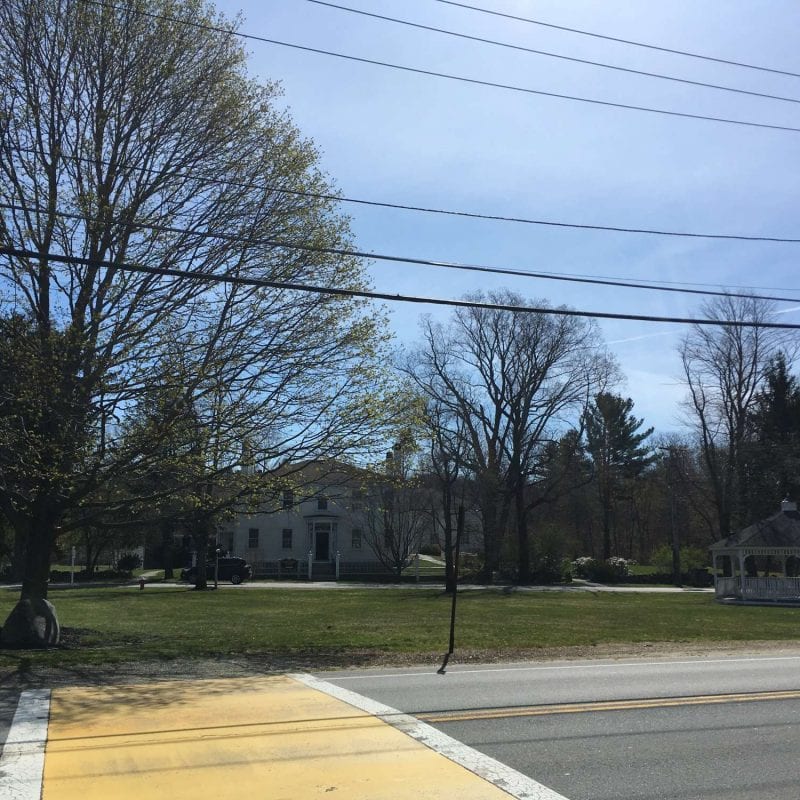 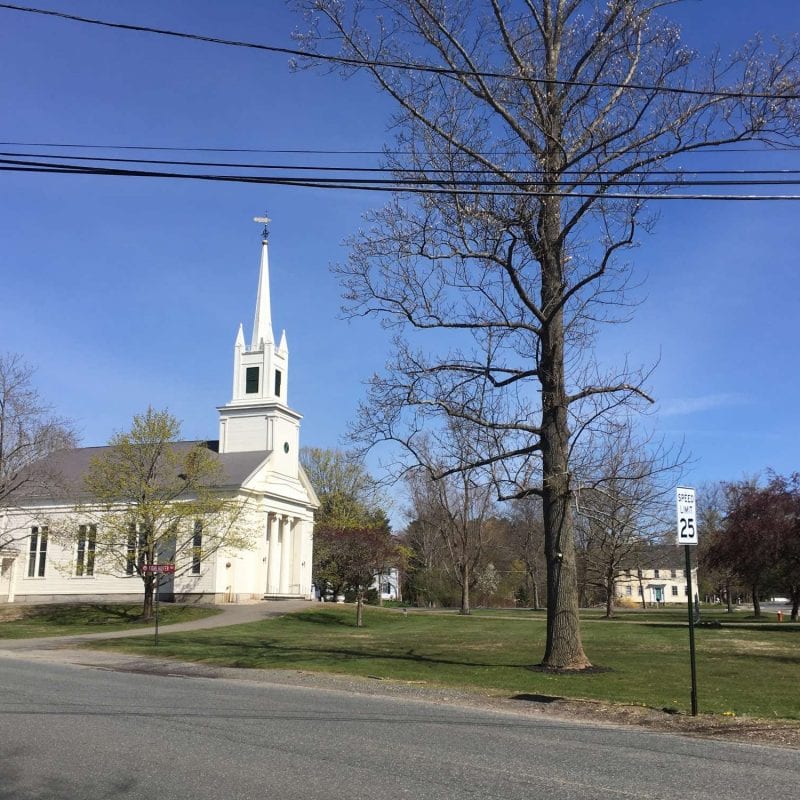 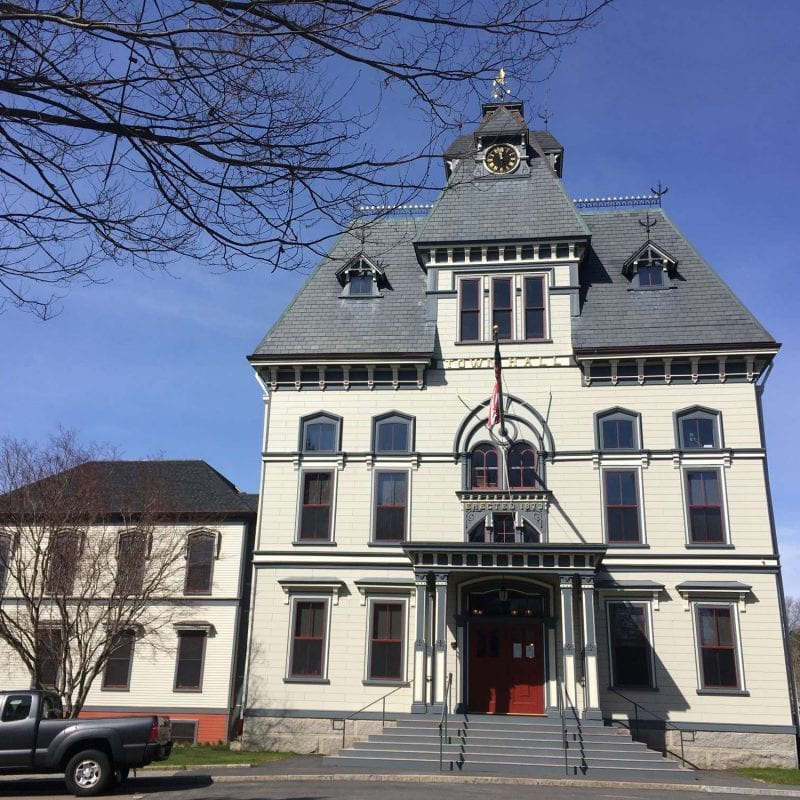 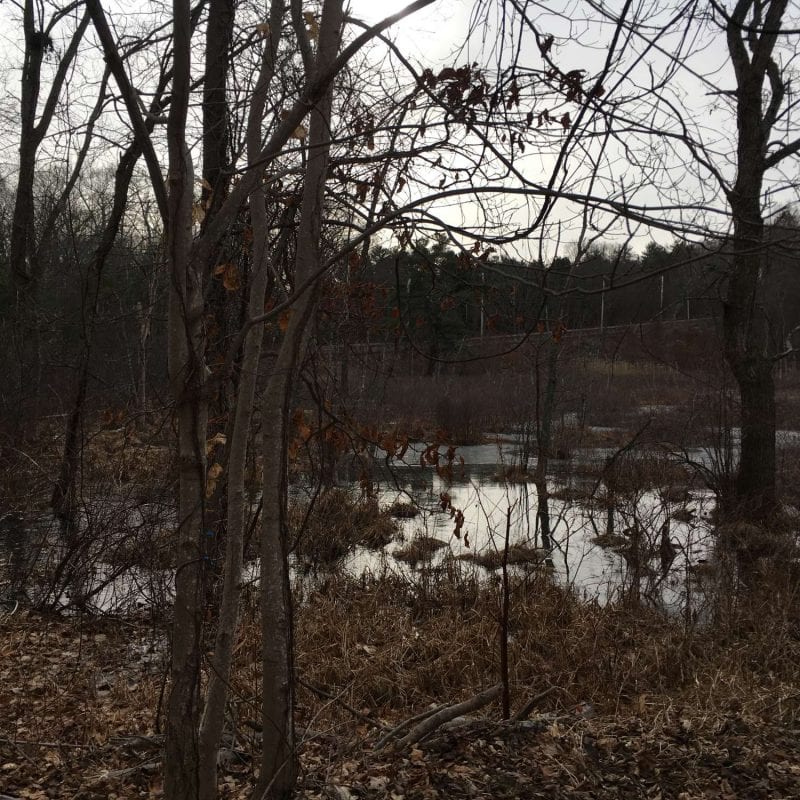 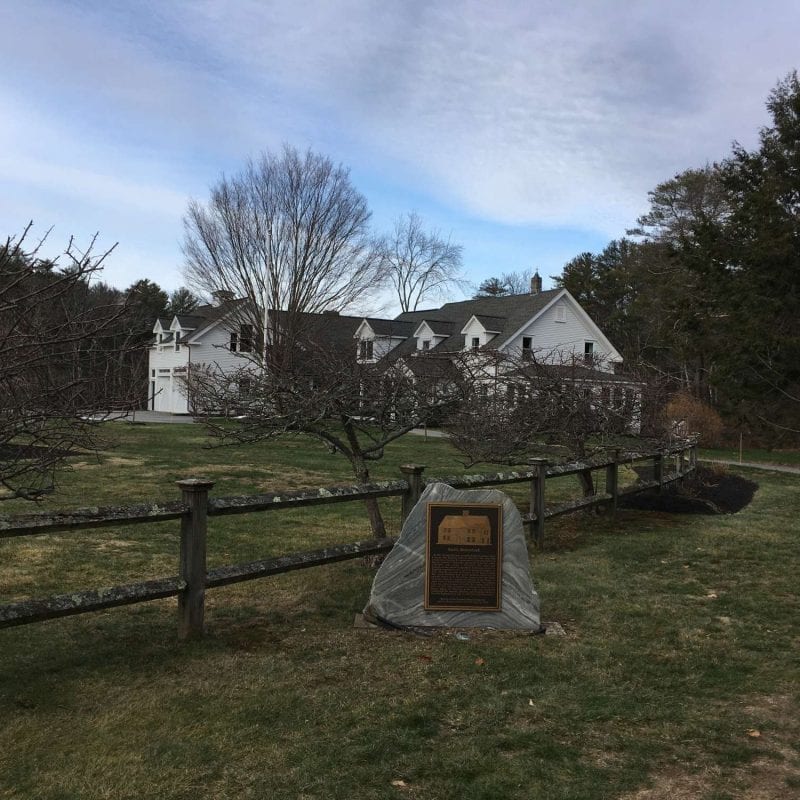